Cambridge University: Global warming may lead to the COVID-19 outbreak

Cambridge University: Global warming may lead to the COVID-19 outbreak.  Since the 21st century, there have been three outbreaks of coronavirus infections in humans-SARS, Middle East Respiratory Syndrome and New coronavirus Pneumonia. These three infectious diseases caused by coronaviruses are most likely to come from bats. The number of coronaviruses in an area is closely related to the abundance of local bat species, and the abundance of bat species is affected by the climatic conditions that drive the geographic distribution of species. Therefore, does climate change directly promote the outbreak of coronavirus-related diseases?

Recently, Robert Beyer and others from the Department of Zoology, University of Cambridge, UK, published a topic in the Top Journal of Environmental Science Science of the Total Environment: Shifts in global bat diversity suggest a possible role of climate change in the emergence of SARS-CoV-1 and SARS-CoV-2 research paper.

The paper believes that since the 20th century, global greenhouse gas emissions have promoted the growth of bats’ preferred forest habitats, making some areas become hotspots for bats to spread the coronavirus.

This study provides the first evidence that climate change may play a direct role in the emergence of the new coronavirus (SARS-CoV-2).

This study shows that, in the past century, the vegetation types in southern Yunnan of China and the adjacent areas of Myanmar and Laos have undergone large-scale changes.

Climate change (including higher temperatures, increased sunshine, and increased carbon dioxide in the atmosphere) has transformed natural habitats from tropical shrubland to savanna and deciduous forests. This creates a suitable environment for many bat species that mainly live in the forest.

The number of coronaviruses in an area is closely related to the number of bat species present. The study found that in the past century, climate change has made the habitat of southern Yunnan more suitable for bats to survive. An additional 40 species of bats have migrated to southern Yunnan, which contain about 100 bat-borne coronaviruses. 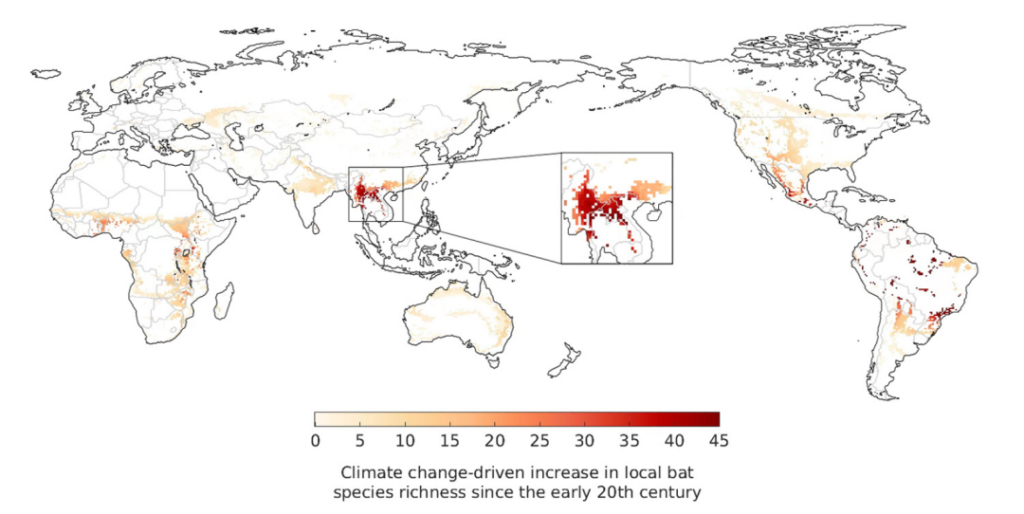 In order to obtain the results of the study, the research team used records of temperature, precipitation and cloud cover to create a map of the vegetation of the world a century ago. Then, they used information about the vegetation needs of the world’s bat species to calculate the global distribution of each species in the early 1900s. Compare it with the current distribution to understand how bat “species richness” has changed globally due to climate change in the last century.

As climate change changes the habitat, bats leave certain areas and move to other areas, which not only changes the areas where the virus exists, but also may cause new interactions between the bat and the virus, leading to more Harmful viruses spread or evolve.

Based on the fact that climate change can accelerate the spread of wild animal and plant pathogens to humans, it is necessary to limit the expansion of urban land, farmland and hunting grounds to natural habitats to reduce contact between humans and disease-carrying animals.

The research team stated that policymakers should recognize the role of climate change in viral disease outbreaks and address climate change as part of the economic recovery plan after the COVID-19 epidemic. The COVID-19 pandemic has caused huge social and economic losses. Governments must seize the opportunity and take decisive action to mitigate climate change, thereby reducing the health hazards of infectious diseases.