Israel Outbreak again: Why wasn’t the mRNA COVID-19 vaccine effective? What’s behind the “outbreak” of the Israeli epidemic? The government is pinning its hopes on booster shot?

On August 19, local time, there were more than 600 severe cases in Israel, which had reached the predetermined threshold of lockdown, but the city has not been closed yet. At present, the news of the Israeli epidemic prevention department is still to accelerate the promotion of the third dose of vaccine.

The lower limit of the lockdown threshold has been reached, but all parties do not want to lock the city

As of August 19, local time, there have been 994 hospitalized patients in Israel, including 603 severe cases, 149 critical cases, and 106 intubation cases.

The number of severe cases has reached the lower limit of the city closure threshold set by the Minister of Health: 600-700 severe cases.

This threshold was announced on August 7, local time. The set idea is that the range of 600-700 cases means that there may be 1200-1400 severe cases in the next week, and severe medical runs and peak deaths may occur at that time. The purpose of choosing to close the city is to prevent too many severe cases from penetrating Israel’s medical rescue capabilities.

As of the morning of August 20, the Israeli government has not released the news of the city closure. The reasons are more complicated. On the one hand, Israel hopes to quickly complete the injection of the booster needle to reduce the occurrence of severe illness; on the other hand, the closure of the city will affect the next Rosh Hashanah, which will bring political pressure.

Although there has been no move to close the city for the time being, Israel has once again strengthened its prevention and control efforts, restricting the number of people gathering in religious places, and authorizing the police to intervene in gatherings in religious places.

Israel is expected to further strengthen its prevention and control intensity soon, because the infectivity of the Delta virus mutant strain is greatly enhanced.

Regarding the vaccination status and critical illness data, the official website of the Israeli Ministry of Health has been published (see the figure below). 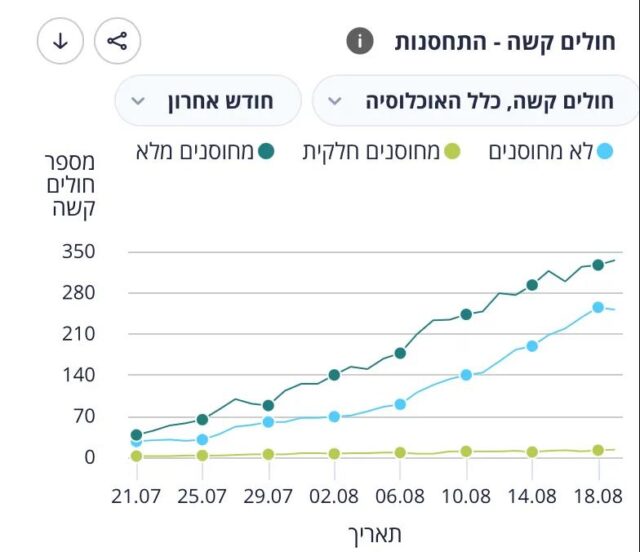 It can be seen that among the severe cases, the largest number is the fully vaccinated population, with 335 people;

Followed by the unvaccinated population, there are 251 people;

There were 13 people who received 1 shot.

The figure below is the result of calculation on August 15 data.

Chart from: Jeffrey Morris: Israeli data: How can efficacy vs. severe disease be strong when 60% of hospitalized are vaccinated?

However, this calculation method has its limitations because there is no way to correct other influencing factors, such as NPI (non-pharmaceutical intervention).

The government hopes to “booster shot”, and further relax the vaccinated population

Based on current data, the vaccine is still effective. Experts speculate that the decrease in vaccine protection may be related to the decrease in neutralizing antibody titer after a period of vaccination.

In addition, the Israel Defense Forces has already opened the third dose of vaccination before, and the assessment believes that the third dose has a good effect. Therefore, the Israeli government is urgently pushing for a “strengthening shot”-requiring residents to be vaccinated with a third shot of mRNA vaccine.

Not only did the Israeli Prime Minister set an example and took the lead in getting the third shot, he also relaxed the population for vaccination again, and plans to open the third shot for people over 30 years old.

Why is there another outbreak in Israel?

Why did the outbreak in Israel take a turn for the worse? Especially after widespread inoculation of mRNA vaccines, Israel once lifted the epidemic prevention and control measures because of the good situation. Israeli officials have not yet announced the conclusion.

The expert analyzed that this is because Israel’s Reff (the rate of virus transmission after control) failed to be controlled below 1.0, and as long as Reff is greater than 1, the number of infected people will continue to expand, eventually leading to severe illness The number of cases has penetrated the hospital’s diagnosis and treatment capacity-this is likely to be the cause of the current Israeli medical crisis. 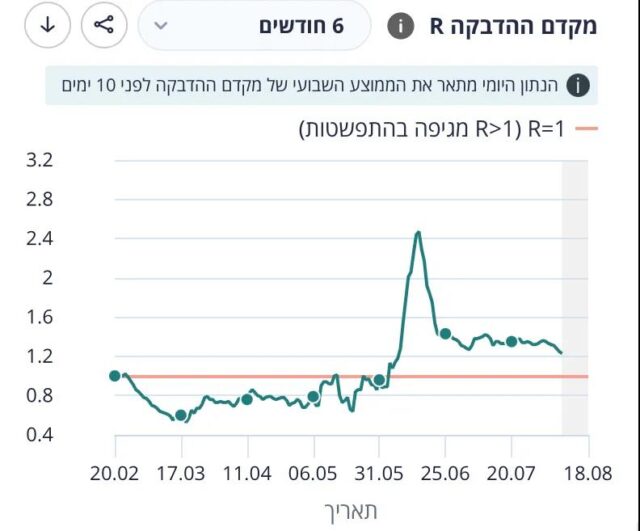 As can be seen in the above figure, since February this year, Reff has been under 1.0 in Israel, and the number of new infections has gradually decreased. However, at the beginning of June, the Israeli government believed that the vaccine was effective and the epidemic was controllable, so it opened the country and relaxed its control measures in an all-round way. Reff has soared, and although it has declined later, it has basically remained at around 1.4.

In other words, Israel’s current “outbreak” does not actually exist—because the infection coefficient has not been effectively controlled, the number of infected cases and the number of severe cases has been steadily increasing. At present, it has only reached the critical point of breaking down the medical system’s treatment capabilities.

What does the situation in Israel tell us? What is the reference for global epidemic prevention and control? This still requires careful judgment of experts.

The advice of experts is: in the case of rapid virus mutations and gradual breakthroughs in vaccine protection barriers, on the one hand, social control measures should be adhered to, and prevention and control should be focused on “isolating the source of infection and cutting off the transmission route” (some countries’s ” The “complete zero policy” is an effective anti-epidemic measure); at the same time, the current vaccine should be quickly upgraded to obtain a better anti-infection effect.

Experts believes that when the global anti-epidemic measures cannot be synchronized, a small number of countries will not be able to effectively prevent the epidemic from being fully vaccinated or “completely cleared” on a global scale. Therefore, it will take longer to end the epidemic.