Prime Minister hid in a nuclear bunker for “combat exercise” for COVID-19 outbreak.

The Prime Minister hid in a nuclear bunker! Israel holds a nationwide “combat exercise” to deal with the outbreak of the COVID-19 mutant virus.

In response to the COVID-19 mutation virus, Israel launched a “combat exercise.”

According to a report from “Russia Today” (RT) on the 11th, Israel launched a nationwide exercise in the form of a “combat exercise” to assess the country’s preparations for a potential outbreak of the COVID-19 mutation. 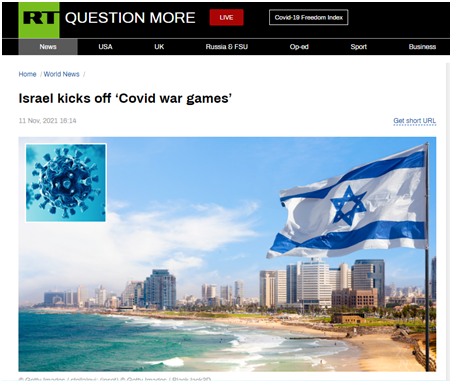 Israeli Prime Minister Naftali Bennett announced on Twitter on the 10th local time this simulation exercise codenamed “Omega Exercise”. According to the report, Bennett often used “Omega strain” to describe the next mutant virus that has not yet been discovered.

Bennett tweeted, “Exercise! The Israeli government will conduct a nationwide exercise tomorrow to check the country’s preparations for a large-scale outbreak of a new deadly coronavirus variant. The simulation will be based on a combat exercise. The form is called “Omega exercise”. Please follow here for more information.”↓ 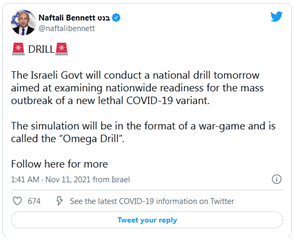 According to reports, this exercise will be led by the Israeli Minister of Civil Defense in a situation room of the National Management Center in Jerusalem. outbreak.

This is a ” new and unprecedented epidemic crown exercise” , according to “Israeli Times” on the 11th latest news, it said to be “the first time to hold such exercises in the world”, a one-day, Bennett the day hiding in underground nuclear bunkers to participate This “combat exercise” was completed.