Austria prepares to “block” those who didn’t receive COVID-19 vaccines due to Austria with Western Europe’s second-to-last vaccination rate.

The number of newly diagnosed cases in the country has reached a new high, but the vaccination rate is “shamelessly low” at only 65%, the Central European country Austria intends to increase the epidemic prevention measures again-for unvaccinated The person implements a “blockade.”

According to a report by the BBC on November 12, Austria’s new confirmed cases in the past 24 hours reached a record 11,775, and the number of cases per 100,000 inhabitants within 7 days reached 751, three times that of neighboring Germany. The Austrian COVID-19 Virus Committee issued a warning that the threat of the epidemic must be taken seriously.

Upper Austria, which borders Germany and the Czech Republic, is the most affected area in the country. It not only has the highest infection rate but also the lowest vaccination rate. In order to save the situation, Upper Austria plans to implement restrictions on unvaccinated people from next Monday, that is, except for work, buying food and physical exercise, unvaccinated people will be prohibited from leaving home, just like the restrictions imposed on all citizens during the national lockdown. measure.

This will not be just a local policy. According to the plan formulated by the Austrian Federal Government in September this year, when 30% of the intensive care unit beds in a state are occupied by patients with COVID-19 pneumonia, it is necessary to impose a lockdown on unvaccinated Austrians. At present, the occupancy rate of intensive care beds for COVID-19 pneumonia in Upper Austria is 20%, and it is still growing rapidly.

Austrian Chancellor Alexander Schallenberg said at a press conference on the 11th that a national blockade of unvaccinated people “may be inevitable” and that “two-thirds of people should not hesitate because of others.” Suffer indecision.”

At present, Austria has banned people who have not been vaccinated from going to restaurants, movie theaters, ski lifts and barber shops. Further blockade measures need to be approved by the Austrian federal government.

The governor of Upper Austria, Thomas Stelzer, has stated that the current situation is very serious. “As long as the federal government gives the green light to the law or creates a legal basis”, they will implement the blockade.

The British “Guardian” pointed out that many Austrians are skeptical of vaccination, and the third largest party in parliament, the far-right Liberal Party, is also encouraging this idea. As the vaccination rate has been delayed, Prime Minister Schellenberg said frankly that the vaccination rate in Austria is “shamefully low.”

In fact, not only Austria, but other German-speaking countries, including Germany and Switzerland, have the problem of low vaccination rates. For example, 33% of people in Germany have not been fully vaccinated, and more than 33.6% of the population in Switzerland have not received the first dose of the COVID-19 vaccine.

According to media analysis, the widespread anti-vaccination campaign in the German-speaking area has affected vaccination in these countries. The Swiss government even wants riot police to line up near the railway station to protect the newly-built “vaccination station” in the station hall. Attacked by angry protesters. 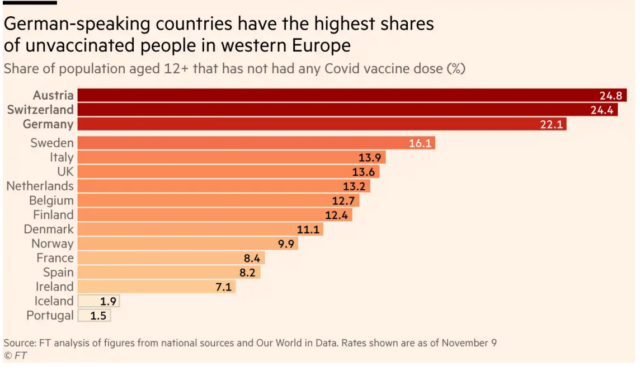 According to data from the Robert Koch Institute in Germany, 69% of those who rejected the vaccine believed that the new coronavirus was an “excus for tightening national control”, and 80% believed that the violation of basic rights was more serious than the danger of the virus. 34% of the respondents said that they believe that the existing vaccines have not been fully tested and therefore refuse to vaccinate. 18% are afraid of side effects, and 15% of the respondents doubt the safety of the vaccine.

At present, the German state of Brandenburg has planned to ban unvaccinated persons from entering restaurants, hotels, cinemas and theaters from next week; in the Netherlands, the government plans to implement a three-week national measure-non-essential shops, coffee Restaurants, restaurants and hotels must close at 19:00.

The World Health Organization has issued a warning last week that due to uneven vaccine coverage and relaxation of epidemic prevention measures, the number of COVID-19 deaths in Europe has risen by 10%, making it the only one in the world where the number of confirmed and dead cases of COVID-19 pneumonia is steadily increasing. area.

The WHO believes that Europe has become the “center” of the epidemic, and that by February next year, the region may have an additional 500,000 deaths.