Aging is a commonplace issue, and people have been trying to combat it. Recently, researchers have designed an antibody as a smart bomb that can identify specific proteins on the surface of these senescent cells.

It then attaches to these cells and releases a drug that removes these cells without affecting other cells, thereby minimizing any potential side effects.

No one knows why some people are more likely to get older than others and suffer from diseases related to the aging process, such as Alzheimer’s disease, fibrosis, type 2 diabetes, or certain types of cancer.

One explanation for this may be that each organism’s response to the damage suffered by its cells during its life ultimately leads to their senescence.

Regarding this explanation, researchers at the Open University of Catalonia (UOC) and the University of Leicester in the United Kingdom have developed a new method that can remove old cells from tissues, thereby slowing the aging process.

Specifically, they designed an antibody as a smart bomb that can identify specific proteins on the surface of these senescent cells. It then attaches to these cells and releases a drug that removes these cells without affecting other cells, thereby minimizing any potential side effects.

The results of this work have been published in “Scientific Reports”, entitled “Targeted clearance of senescent cells using an antibody-drug conjugate against a specific membrane marker”. In order to develop effective treatments to delay age-related diseases, even the longer-term aging process itself has opened the door, with the goal of prolonging lifespan, and most importantly, people’s quality of life at this stage. 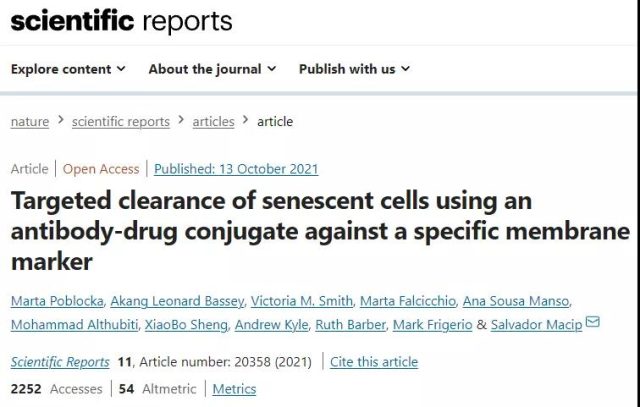 “We now have for the first time an antibody-based drug that can be used to help slow the aging of human cells,” said Salvador Macip, a doctor and researcher at UOC and the University of Leicester, the leader of the study.

The expert explained: “Our work is based on existing cancer therapies, targeting specific proteins on the surface of cancer cells and then applying them to senescent cells.”

All living things have a mechanism called “cell senescence”, which prevents damaged cells from dividing and removes them to prevent their regeneration. For example, this mechanism helps slow the progression of cancer and also helps build tissue models during embryonic development.

However, although this is a very beneficial biological mechanism, it contributes to the development of diseases as the body ages. This seems to be because the immune system is no longer able to effectively remove these senescent cells, which gradually accumulate in the tissues and impair their function.

Previous laboratory experiments with animal models have shown that the elimination of these cells with drugs successfully delays the progression of the disease and age-related decline. This is done with a new drug called senolytics. However, their lack of specificity and side effects hinder their use in humans.

The drug designed by Macip and his team is a second-generation senolytic with high specificity and remotely controlled drug delivery. They started with the results of the previous study, which looked at the “surface group”, that is, the proteins on the cell surface, to identify those proteins that only exist in senescent cells. Macip said: “They are not universal. In every type of senescent cell, some are more common than others.”

In this new work, the researchers used a monoclonal antibody to train it to recognize senescent cells and attach to them. The researcher in charge of the Cancer and Aging Mechanisms Laboratory at the University of Leicester said: “Just like our antibodies recognize bacteria and protect us from them, we have designed these antibodies to recognize old cells. In addition, we inject them Toxic substances are used to destroy them, as if they were a remotely controlled missile.”

Once the early symptoms of Alzheimer’s disease, type 2 diabetes, Parkinson’s disease, arthritis, cataracts or certain tumors appear, antibody therapy can be started. In the long term, researchers believe that in some cases, it can even be used to achieve healthier aging.