As part of the effort to end the global COVID-19 pandemic, the world’s first mRNA vaccine has been produced at an unprecedented rate, and has now begun to be promoted, with the second vaccine following closely behind.

At present, two mRNA vaccines quickly approved by Europe and the United States have received great attention because of their fast and efficient characteristics. In fact, Moderna and BioNTech, which have successfully developed these two mRNA vaccines, have been deeply involved in mRNA vaccines (especially in the field of tumor vaccines) for many years and have carried out multiple clinical trials.

Scientists at the National Center for Nano Science and Technology of China (NCNST) have designed a hydrogel that can provide mRNA vaccines with immunostimulatory adjuvants. According to a paper titled “In Situ Transforming RNA Nanovaccines from Polyethylenimine Functionalized Graphene Oxide Hydrogel for Durable Cancer Immunotherapy” published in the journal Nano Letters of the American Chemical Society.

The research team designed a hydrogel containing graphene oxide (RO) and low molecular weight polyethyleneimine (LPEI), which can be used to deliver mRNA vaccines with immunostimulatory adjuvants. Graphene oxide has the characteristics of large surface area. It can effectively carry drugs, and polyethyleneimine can bind to mRNA for translation. After the vaccine is injected into melanoma mice, its activity can be maintained for at least 30 days, inhibit tumor growth and prevent metastasis.

The researchers said the results show that the hydrogel delivery system has the potential to help mRNA vaccines achieve long-term anti-tumor effects, such as cancer immunotherapy. The researchers also added Resiquimod, a TLR7/8 agonist developed by Galderma, as an adjuvant to further enhance the stimulation and expansion of antigen-specific CD8+ T cells that are vital to the anti-tumor immune response.

In COVID-19, the mRNA vaccine carries genetic information that instructs the body to produce specific viral proteins to trigger the required immune response. In cancer, vaccines are usually designed to translate tumor-related antigens so that the immune system can recognize and eliminate cancer.

A short course of immunity can prevent COVID-19, but in cancer treatment, longer-lasting mRNA delivery is required to achieve a stable therapeutic effect.

To test its mRNA platform, the researchers used ovalbumin (a protein found in chicken egg white) as a model antigen. They mixed ovalbumin mRNA and an adjuvant with a hydrogel and injected it under the skin of mice with melanoma tumors, which were designed to express ovalbumin on their surface.

The research team showed that the hydrogel stably releases the vaccine (including mRNA and adjuvant) into the nanoparticles for at least 30 days and migrates to the lymph nodes. 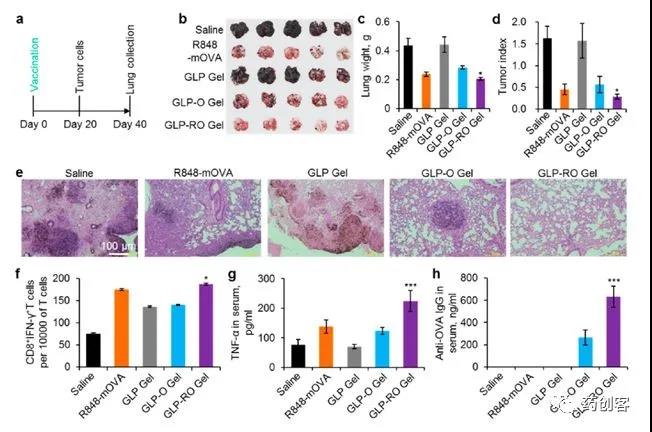 Moreover, compared with other antibodies, the new mRNA gel therapy induced the highest level of ovalbumin-specific antibodies in the serum, indicating that it not only inhibited tumor growth, but also prevented tumor recurrence or the formation of distant metastases.