Throughout the 40 years of gene therapy, it has made great progress in the prevention and treatment of human diseases, bringing hope to patients and their families with limited treatment options, but also suffered many setbacks, serious adverse reactions, and even deaths.

The first conceptual experiment of gene therapy was by Dr. Stanfield Rogers, who used his observation that Shope papilloma virus could reduce serum arginine, and tried to use the virus to treat patients with hyperargininemia. Unfortunately , Unfortunately, the trial failed to reverse the disease because Shope papilloma virus cannot produce arginine.

In an unpublished study in 1980, Dr. Martin Cline attempted to implant recombinant beta-globin into the bone marrow cells of two beta-thalassemia patients. The transfected cells are then reintroduced into the patient. While groundbreaking at the time, the first attempts at in vitro gene therapy ultimately failed.

It was not until the early 1990s that viral vector gene therapy achieved clinical success. A trial led by French Anderson et al. also employed an ex vivo treatment, in patients with adenosine deaminase deficiency severe combined immunodeficiency (ADA-SCID), injected with recombinant retroviruses carrying the ADA gene. T cell therapy, which is considered to be the first successful gene therapy in humans.

In recent years, the gene therapy field has seen a wave of viral vector-based drugs that have received regulatory approval and come in a variety of designs and purposes. These modalities range from vector-based cancer therapy, to treating monogenic diseases with life-changing outcomes .

Despite these successes, the field of gene therapy still faces many challenges that prevent it from realizing its full potential.

JoteT. Bulcha et al. published a review of “Viral vector platforms within the gene therapy landscape” in Nature, expounding the mechanism of viral vectors in gene therapy and their promotion in the treatment of human diseases. 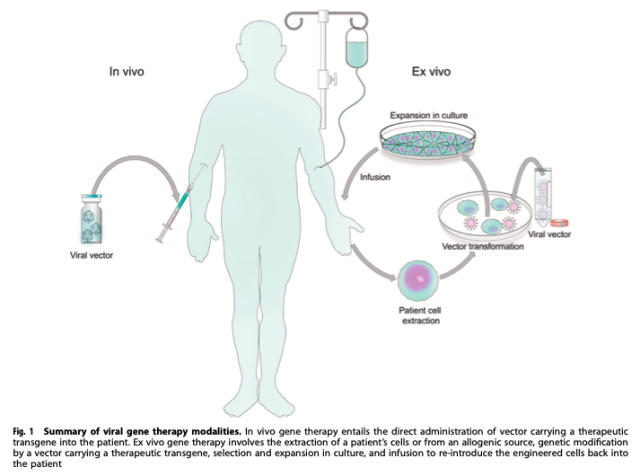 Gene therapy design logic can be summarized into the following four types:

② Gene silencing, inactivation of mutant genes that are “toxic” to cells;

④ Gene editing, through the editing of genes in the genome, to achieve disease treatment.

Typically, a viral vector consists of the following three parts:

① The protein capsid or envelope that wraps the gene, targeting tissue or cell and antigen recognition;

② The target gene, when expressed in cells, can produce the expected effect;

③ “regulatory box”, that is, a combination of enhancers, promoters, and auxiliary elements, which controls the expression of transgenes.

The E1A gene is critical for the transcription of other viral genes such as E1B, E2, E3 and E4, E1B regulates viral replication and the composition of “late” genes L1-L5 (essential for viral assembly, release and lysis).

At present, hundreds of subtypes of adenovirus have been found, which are divided into seven subtypes of AG.

Regarding the Ad infection route, it is mainly based on subtype C human adenovirus type 5 (HAd5).

The distal domain of the HAd5 viral capsid fiber interacts with the coxsackievirus Ad receptor (CAR) on the cell surface to mediate the endocytosis of the virus into the cell.

In follow-up studies, new receptors were also found that can mediate the invasion of viruses, such as: CD46, DSG2, etc. After the virus invades the cell, the viral DNA enters the nucleus through the nuclear membrane pore complex, which is independent of the cell’s chromosome and does not integrate into the host cell’s genome. No insertion and integration risks.

The first-generation Ad vector was genetically engineered to delete the E1A/E1B region and replace it with a transgene expression cassette up to 4.5 kb in length (Figure 3b). In addition, the E3 region is not required for virus propagation in cultured cells, so the E1/E3 double deletion frees up more space for the transgene cassette.

Recombinant Ad (rAd) cannot replicate in host cells due to the removal of the E1A gene. Therefore, the virus needs to be prepared and amplified in cells that can express E1A and E1B, such as HEK293.

The first-generation Ad vectors had two major drawbacks: (1) de novo expression of the Ad protein could still activate the host immune response, resulting in the elimination of vector-transduced cells; (2) during genome amplification, the vector was genetically engineered with HEK293. Spontaneous homologous recombination may occur in the E1 region, resulting in a replication-competent adenovirus.

On the basis of the first-generation viral vector, the researchers made more space for foreign gene insertion by further deleting other early gene regions (E2a, E2b or E4), while also reducing late gene expression, causing fewer cells Toxic T lymphocyte response, prolonged the existence of the virus in mice. However, the complementation efficiency of the gene deleted by the adenovirus through the engineered cell line is low, and the obtained virus titer is low, which is not conducive to the later preparation and use.

The production of HCAds in cell culture requires an additional adenoviral helper virus (HV), which is similar in composition to the first-generation vectors, but differs in that they contain a loxP site that inserts a packaging signal. Following HV infection, the HCAd genome was transfected into HEK293 producing cells expressing Cre recombinase. Viral proteins provided by the helper genome allow replication and packaging.

However, a major challenge in HCAd production is ensuring the elimination of helper adenovirus (HV) from vector formulations, which may alter the efficacy and safety of HCAd vectors in vivo.

The first CRAds were based on a partial deletion of the E1B sequence (E1B-55k) (Fig. 3c). Most tumor cells are p53-mutated, and E1B-55K-deleted CRAds undergo genome amplification and lysis only in patient tumor cells, while non-tumor cells are unaffected.

The E1A region contains four domains, of which the CR2 domain binds to retinoblastoma protein (RB) to release E2F, an S-phase activating transcription factor required for viral genome replication in normal cells. However, due to the excessive expression of E2F in RB-mutated cancer cells, the AdD24 vector was generated by deleting part of the CR2 domain of the E1A protein (Figure 3d above), which can conditionally replicate in such tumor cells.

Currently, ad-based gene therapy clinical trials account for 50% of the total number of global clinical trials. They are mainly used for novel vaccines and cancer treatments: 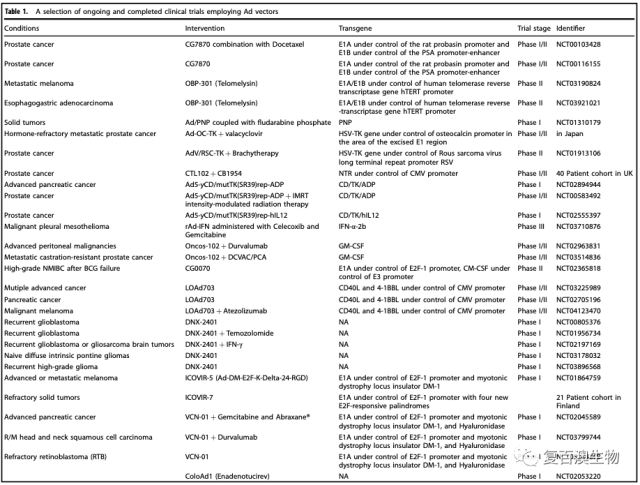 Based on the well-established fact that many tumor types exhibit dysfunction in the p53 tumor suppressor pathway, Ad vectors have been designed to induce p53 expression, resulting in cell cycle arrest and apoptosis in tumor cells. However, not all tumor types lack p53 function. Other applications of Ad vectors in anticancer therapy have been tested to target expression of prodrug-converting enzymes to achieve tumor cell killing.

Cytosine deaminase (CD) can convert the prodrug 5-fluorocytosine (5-FC) to toxic 5-fluorouracil (5-FU), which is then further processed in cells to 5-FUTP and 5-FdUMP. These products can cause blockage of thymidylate synthase, as well as DNA damage.

① Intrapleural ad delivery of interferon (IFN)-β or IFN-α-2b has been shown to be a safe method for the treatment of malignant pleural mesothelioma. Recently, a treatment approach using AdIFN-α-2b in combination with celecoxib and gemcitabine is actively undergoing Phase III clinical trials.

③ CG0070 expresses GM-CSF under the control of the human E2F-1 promoter to target bladder cancer.

④ CD40 is a cell surface receptor, once it interacts with CD40 ligand (CD40L), it will prevent cell proliferation and promote cell apoptosis. This association stimulates T helper cell type 1 immunity through maturation of dendritic cells and promotion of M2 differentiation into M1 macrophages. In most breast cancer cells, CD40 is overexpressed, allowing the use of Ad vectors to deliver CD40L to target breast cancer.

① Delta-24-RGD (DNX-2401) is an oncolytic Ad vector that deletes E1A-ΔCR2) and inserts a peptide sequence (RGD-4C) into the HI loop of fibrin. The RGD-4C sequence has been shown to bind strongly to αvβ3 and αvβ5 integrins and enhance viral targeting in a CAR-independent manner.

② The gene therapy vector VCN-01 is characterized in that its heparan sulfate glycosaminoglycan binding site (KKTK) in the fiber axis is replaced by an RGDK motif. This vector delivers the human glycosylphosphatidylinositol-anchored enzyme, PH20 hyaluronidase, to facilitate viral spread in the solid tumor stroma.

③ The HAd5/3 chimeric vector was constructed by replacing the receptor-binding fiber globular domain of the HAd5cr2-depleted vector with the globular domain of type 3 (Ad3). HAd5/3-Cox2L-D24 utilizes tumor-specific cyclooxygenase 2 gene promoter to control the expression of E1A, thereby further enhancing tumor selectivity.

The future of adenoviral vectors

Chimpanzee-derived Ad vectors are the most widely used, as NA antibodies against these vectors are significantly lower in the human blood circulation.

To date, more than 10 clinical trials using ChAd3-derived vaccines have demonstrated the safety of this replication-deficient vector.

High-capacity HCAd vectors enable long-term transgene expression in vivo because they suppress the host immune response to viral proteins that may remain expressed.

To combat HV contamination, self-activating HVs have been developed, such as AdTet Cre, in which the chimeric MereCre Mer recombinase is regulated by the TetOn system to ensure efficient HV elimination.

In addition to this advantage, the lack of viral coding sequences in the HCAd genome expands cloning capacity to 37 kb, allowing the regulation of site-specific nucleases such as zinc finger nucleases (ZFNs), transcription activator-like effector nucleases, and CRISPR-Cas9 system for genome editing.