Why is the mRNA vaccine effective against Omicron when used as a booster?

Nature: Why is the mRNA vaccine developed for the original strain effective against Omicron when used as a booster?

On April 2, 2022, researchers from The Rockefeller University in the United States published a research paper entitled: Increased Memory B Cell Potency and Breadth After a SARS-CoV-2 mRNA Boost in Nature .

These findings help explain why mRNA vaccines based on the original 2019-nCoV strain are still effective against newly developed variants when used as boosters. 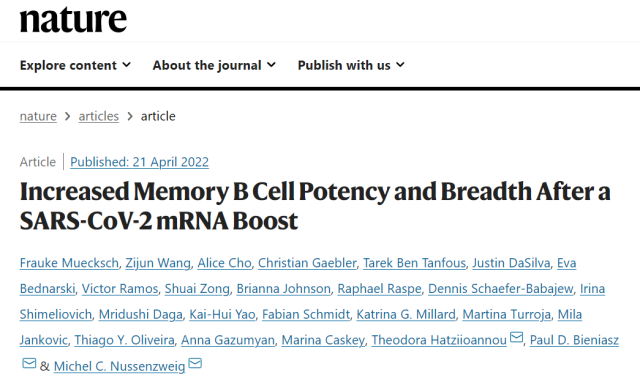 The research team analyzed blood samples from 42 people who had received three doses of the mRNA vaccine (8 with Moderna and 34 with Pfizer and BioNTech) after the first, second and third doses, respectively. collect. None of the study participants had ever been infected with the new coronavirus.

Memory B cells can quickly respond to the new coronavirus and produce antibodies. The antibodies produced by these cells showed better breadth and greater potency in neutralizing SARS-CoV-2 than those produced by cells after the second dose. More than 50% of these antibodies can neutralize the Omicron variant.

The research team pointed out that the increase in antibody efficacy after the third injection is because the antibodies produced by the newly emerged memory B cells can target more receptor binding domains (the receptor binding domain of the new coronavirus spike protein, which is conducive to the entry of the virus into the human body). cells) .

They added that while the third dose boosted antibody responses against multiple SARS-CoV-2 variants, it did not completely prevent breakthrough infections.

Why is the mRNA vaccine effective against Omicron when used as a booster?