Whole brain radiation therapy (WBRT) has been one of the main treatments for brain metastases, especially for those patients who do not have the opportunity for surgery [1]. Unfortunately, current clinical evidence shows that whole brain radiotherapy does not significantly improve the prognosis of patients with brain metastases [2].

Recently, the team of Professor Manuel Valiente from the Spanish National Cancer Research Center discovered a new mechanism of resistance of brain metastases to whole-brain radiotherapy.

They found that brain metastases cancer cells can highly express and secrete S100A9 protein, which mediates radioresistance by binding to the receptor RAGE on the surface of tumor cells and activating the intracellular NF-κB/JunB signaling pathway. reversed by the RAGE inhibitor FPS-ZM1 .

In addition, they also found that S100A9 can be used as a biomarker (both blood test or tumor tissue test) to predict the sensitivity of patients with brain metastases to whole-brain radiotherapy, so as to personalize radiation therapy for patients .

The results of this study provide a theoretical basis for individualized radiation therapy for patients with brain metastases. At the same time, a radiosensitizer with potential clinical application value was discovered, which has important clinical translation significance. The relevant research results were published in the famous journal Nature · Medicine” on [3]. 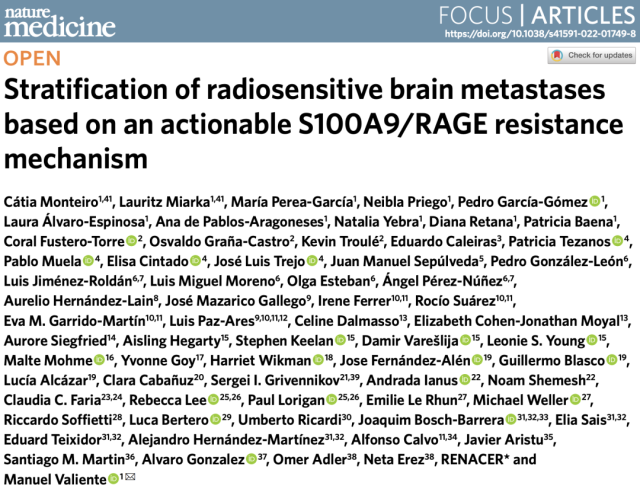 They found that three different regimens of whole-brain radiation did not prolong survival in mice compared with controls , and that both cell lines were surprisingly sensitive to radiation when cultured in vitro .

An animal model of brain metastases is resistant to whole-brain radiotherapy, but cell lines are sensitive to radiotherapy when cultured in vitro

This intriguing phenomenon has led researchers to wonder if it is because tumor cells come into contact with brain tissue that they become resistant to radiotherapy?

So they placed H2030-BRM or E0771-BRM cells on thin slices of brain tissue grown in vitro and treated them with the same radiation as before, and found that the cancer cells did become resistant to radiation, suggesting that the brain where the tumors grew Substances that alter the sensitivity of cells to radiotherapy exist in the external microenvironment . 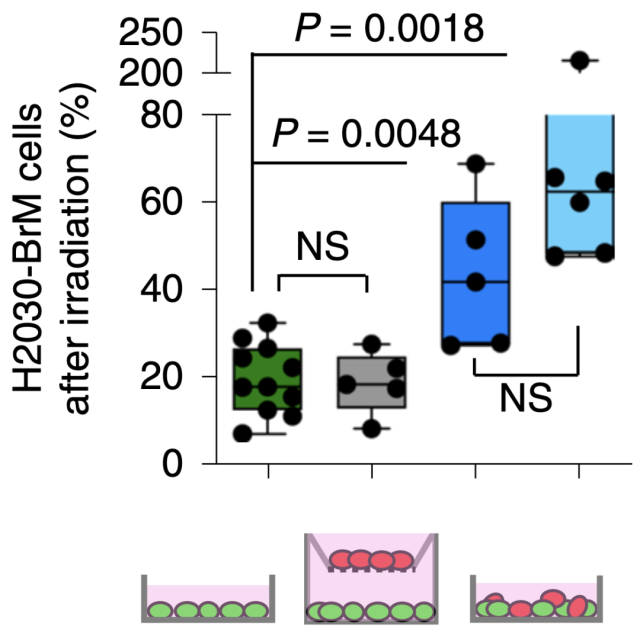 The above studies suggest that S100A9 may be involved in the mechanism of radiation resistance of brain metastatic cancer cells .

So how does S100A9 cause radiosensitized brain metastases to become radioresistant?

Through transcriptomic analysis, the researchers found that the receptor RAGE of S100A9 was highly expressed after radiation stimulation in radiotherapy-resistant brain metastases, and also in animal models and human brain metastases, with enriched pathways. Analysis showed that the NF-κB signaling pathway downstream of RAGE was significantly activated.

These data suggest that brain metastases cancer cells express and secrete S100A9, which binds to the radiation-induced high expression of the RAGE receptor and activates NF-κB to mediate radiation resistance .

Next, the researchers studied the effect of S100A9 on radiosensitivity in vivo, and constructed a lung cancer brain metastasis model in which H2030-BrM cells were silenced by S100A9.

The researchers then confirmed in vivo that S100A9 indeed mediates tumor radioresistance by activating the NF-κB/JunB signaling pathway .

Since S100A9 can be expressed not only by tumor cells, but also secreted by neutrophils and monocytes. To verify whether radioresistance is mediated by tumor-specifically secreted S100A9, the researchers constructed a S100A9 knockout mouse model, and then implanted wild-type E0771-BRM cells into the brain to construct a brain metastasis model. Radiotherapy remained resistant. Thus , it was confirmed that radioresistance was indeed mediated by S100A secreted by brain metastatic cancer cells . 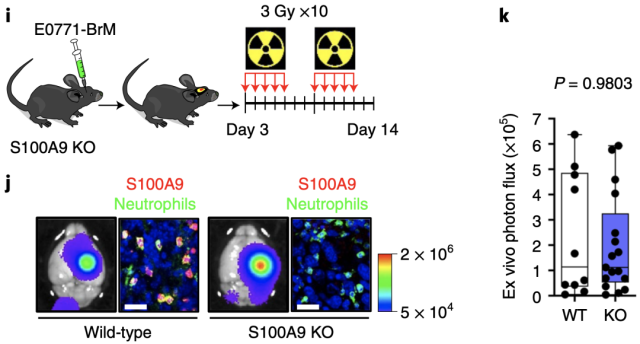 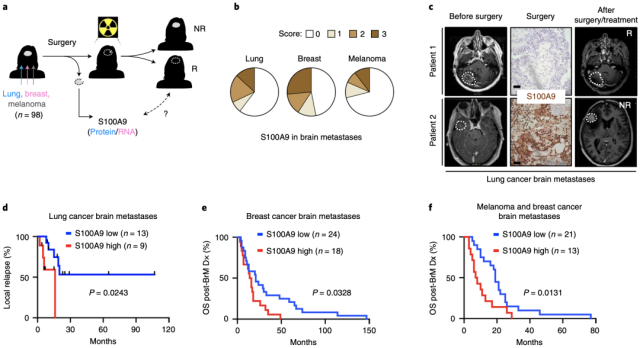 Considering that some patients with brain metastases have lost the opportunity for surgery and cannot obtain intracranial tumor specimens to evaluate the expression level of S100A9, the researchers also studied the relationship between the level of S100A9 in blood and the radiosensitivity of patients.

By analyzing blood samples and clinical data from 71 patients with brain metastases, they found that S100A9 levels in blood can also be used to predict the prognosis of patients receiving standard treatment (including radiotherapy) , although larger clinical studies are needed to determine this. verify.

In order to allow those patients with high S100A9 levels to enjoy the same benefits of radiation therapy, the researchers could not help but wonder, can this radiation resistance be reversed?

Fortunately, the existing RAGE inhibitor FPS-ZM1 penetrates the blood-brain barrier very well [5]. After using FPS-ZM1 in mice with lung cancer brain metastases and breast cancer brain metastases, the researchers found that tumors that were originally resistant to radiotherapy became sensitive to the treatment.

Overall, Valiente’s team found that S100A9 mediates radiotherapy resistance in brain metastases and can be used as a potential biomarker to predict the sensitivity of patients to radiotherapy, so as to achieve the purpose of personalized treatment .

It is understood that researchers have initiated a prospective multicenter study to evaluate the predictive value of S100A9 for radiosensitivity.

More importantly, this radiotherapy resistance can be reversed by RAGE inhibitors, and RAGE inhibitors have entered clinical trials for the treatment of Alzheimer’s disease [6].

In the near future, the drug may actually be used as a radiosensitizer in clinical use to improve the prognosis of patients with brain metastases.