Different from chemotherapy that “kills a thousand enemies and destroys eight hundred”, oncogene-targeted therapy is called a “biological missile” because of its precise effect on cancer-causing targets.

In recent years, a variety of targeted therapy drugs have been successfully used in clinical practice, however, the actual benefits of patients with advanced tumors are not ideal, and one of the important reasons is drug resistance. However, little is known about the mechanisms of acquired resistance to targeted therapy.

Some studies have found that residual cancer cells that survive targeted therapy and subsequent DNA damage repair are important reasons for tumor cells to develop drug resistance [1]. Therefore, exploring DNA damage repair-related molecules induced by targeted therapy and clarifying the mechanism of tumor drug resistance play a crucial role in the development of targeted drugs and the selection of clinical programs.

They also found that targeted therapy in combination with an ATM inhibitor eradicated surviving residual tumor cells in cell lines in vitro and in animal models, resulting in a more durable therapeutic response [2].

This research result has laid a theoretical foundation for the integration of clinical development of ATM inhibitors and existing targeted therapy programs . The related research results were recently published in the famous journal Science Translational Medicine .

Next, let’s see how this research was carried out.

They found that the expression of phosphorylated ATM (p-ATM) and γH2AX at the S1981 site was significantly increased after treating the above cell lines with different doses of cognate targeted therapeutics for 24 hours .

It should be pointed out that ATM S1981 phosphorylation is a necessary site for activation of downstream DNA damage response signaling pathways, and γH2AX produced by phosphorylation of H2AX (histone H2A family member X) is a biomarker of DNA double-strand breaks .

Subsequent cell clone formation experiments showed that a significant increase in γH2AX expression was still observed at drug doses that did not affect cell viability, a conclusion that was observed in three gefitinib-resistant EGFR-mutant NSCLC cell lines (PC9R , GR4, WZR12) were further validated; meanwhile, negative Annexin V staining (for detection of apoptosis) was observed in PC9 and A549 cells treated with targeted drugs.

Finally, the neutral comet assay (a technique that detects DNA damage at the single-cell level) found that the presence of DNA double-strand breaks was detected in PC9 and A549 cells after 24 hours of targeted drug treatment, suggesting that the observed activation of ATM is due to DNA damage. 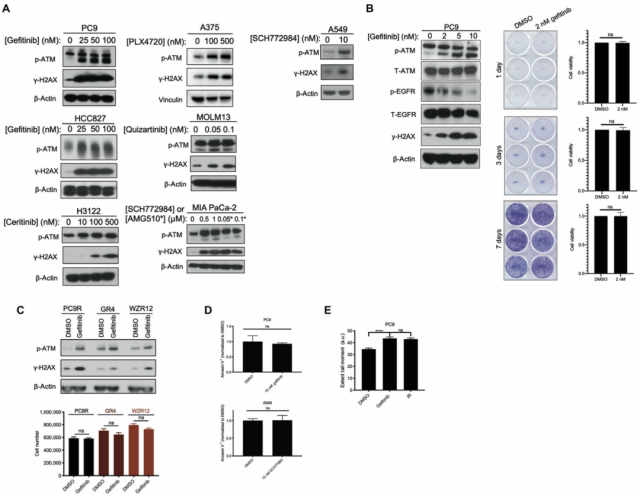 So, how is ATM activated? Let’s look down.

First, PC9 and HCC827 cells were treated with gefitinib (EGFR blocker) for 24 hours, and an increase in the phosphorylation expression of ATM and its substrate checkpoint kinase 2 (Chk2) at T68 was observed; subsequently, the researchers used Treating PC9 cells with an ATM kinase inhibitor (AZD0156) alone or in combination with gefitinib, AZD0156 and gefitinib were found to abrogate γH2AX expression and activation of the DNA double-strand break repair pathway .

In the following experiments, the researchers found that with the increase of gefitinib dose and treatment time, the expression of p-ATM and γH2AX also gradually increased, while the initiator caspase 9 (initiator caspase 9) and Both executor caspase 3 were cleaved.

A recent study showed that activation of endogenous pathway caspases can lead to the formation of DNA double-strand breaks and subsequent activation of ATM [3].

To further test this hypothesis, the researchers treated PC9 cells with a pan-caspase inhibitor (Q-VD-OPh) alone or in combination with gefitinib and found that the combination of the two eliminated gefitinib alone ATM activation observed upon Ni treatment. 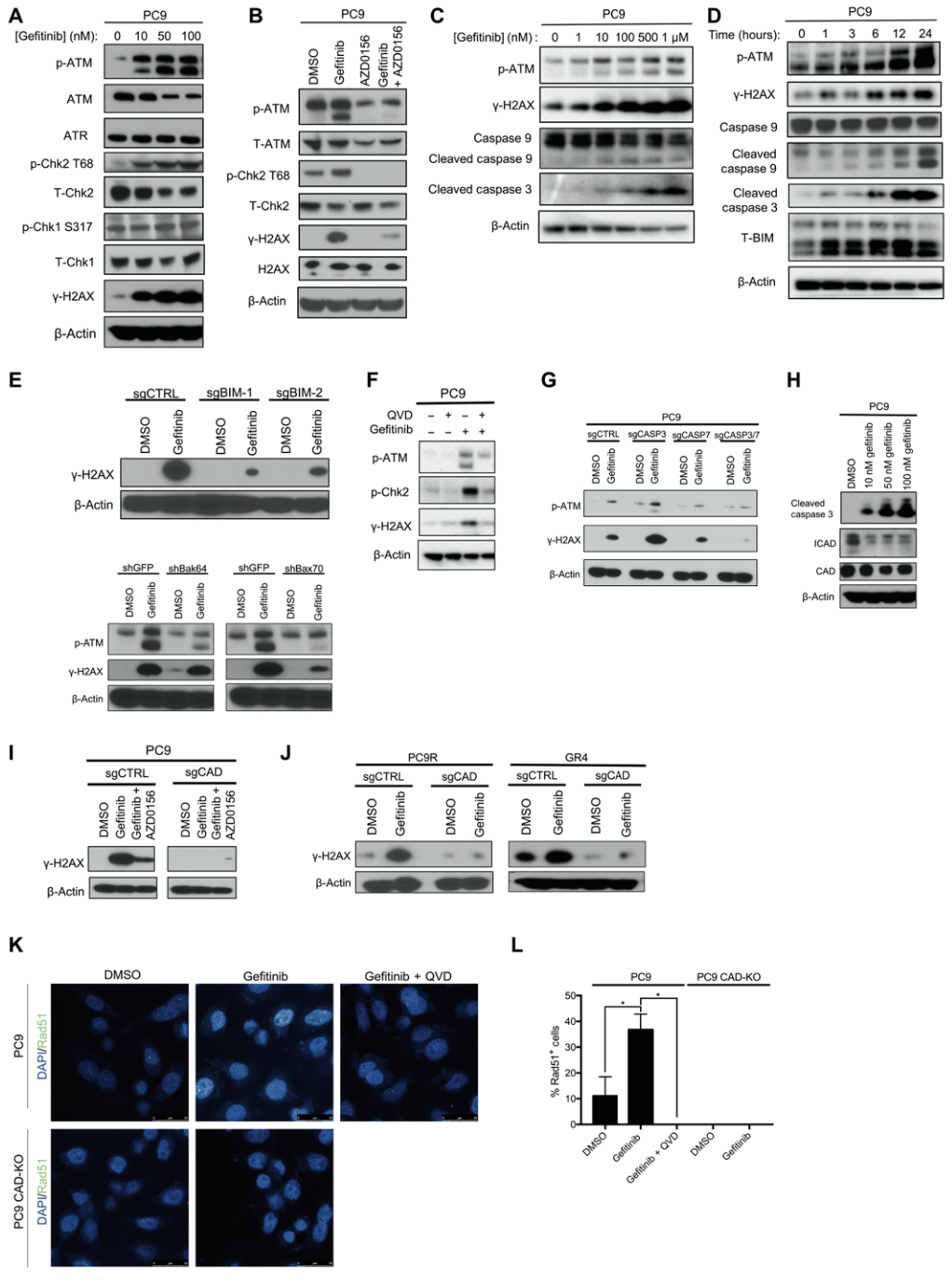 First, previous experiments have confirmed that AZD0156 can block gefitinib-induced ATM activation, and then researchers treated PC9, PC9R, and GR4 cells with AZD0156 alone or in combination with gefitinib and found that AZD0156 could simultaneously increase resistance to targeted drugs .

Finally, the research team assessed the effect of DNase on cellular responses when combined with EGFR inhibitors and ATM inhibitors. The study found that knockdown of DNase expression in PC9 and GR4 cells reversed the inhibitory effect of combination therapy on tumor cell growth.

Next, after inhibiting the expression of ATM, it was found that depletion of ATM abolished gefitinib-induced activation of γH2AX, suggesting that AZD0156 acts by targeting ATM inhibition.

Taken together, these results demonstrate that DNase-mediated DNA double-strand break formation in tumor cells that survive EGFR inhibitor treatment is synthetically dependent on ATM, a key kinase that resolves this DNA damage . 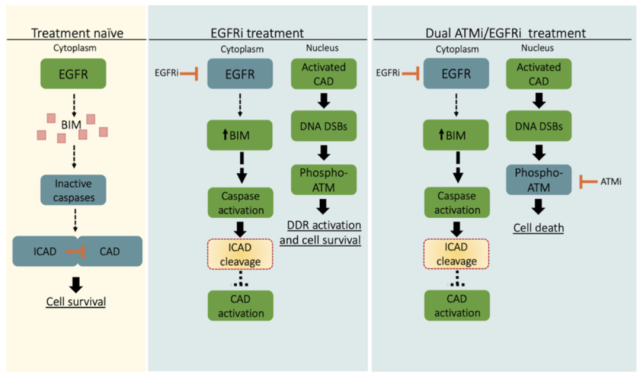 Schematic diagram of the mechanism

In vitro cell experiments have confirmed that the combination of EGFR inhibitors and ATM inhibitors can inhibit the growth of drug-resistant tumor cells. So, will this treatment combination prevent tumor growth in vivo? Next, the research team conducted in vivo xenotransplantation experiments, and let’s see what the results are.

The results showed that ATM inhibitors could suppress the growth of tumors resistant to targeted therapy ; consistent with this finding, in MGH134 xenograft mice, osimertinib treatment produced an initial growth inhibition followed by tumor progression, whereas Combination therapy with osimertinib and AZD0156 produced sustained tumor regression .

Finally, in order to explore the possible clinical relevance of these experimental results, the research team analyzed ATM activation in tumor tissue from patients treated with EGFR inhibitors.

First, the researchers performed immunohistochemical (IHC) staining on tumor tissue from five EGFR-mutant NSCLC patients, and the results showed that p-ATM expression was significantly higher in tumor tissue during treatment than before treatment with the EGFR inhibitor erlotinib Increased ; a further comprehensive analysis of tumor samples from all patients found that p-ATM expression was significantly increased in tumor tissue from progressive patients treated with erlotinib.

The time to disease progression (TTP) was 17.8 ± 10.9 months with erlotinib in patients with tumors with ATM loss -of-function mutations, compared with 9.0 ± 1.9 months in those with tumors that may have non-functional ATM mutations months; this result is consistent with the time to clinical progression of 8 to 12 months observed in multiple studies of unselected patients with EGFR-mutant NSCLC receiving first-line erlotinib [4].

These data above suggest that ATM activation occurs in tumor cells that survive EGFR inhibitor treatment and may play a tumor-protective role. 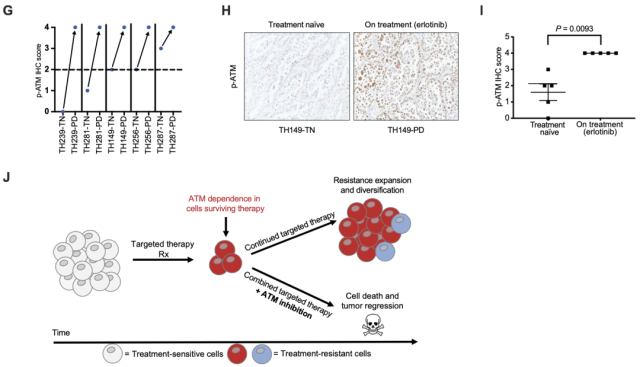 In general, this study explored the molecular mechanism of drug resistance to targeted therapy, and further verified the clearance effect of ATM inhibitor and targeted drug combination therapy on drug-resistant tumors through in vitro and in vivo experiments, and finally returned to the clinic.

The expression of NSCLC patients in tumor tissues before and after targeting, and the effect of ATM loss-of-function mutations on the efficacy of targeted drugs were detected.

This study lays a theoretical foundation for the integration of clinical development of ATM inhibitors with existing targeted therapy programs, as well as the design of clinical trials, and also provides new clinical ideas for diagnosis and treatment.