WHO says global death toll from COVID-19 is approaching 15 million.

On May 5 ,  the latest WHO estimates show that the number of deaths due to the COVID-19 epidemic in 2020 and 2021 is close to 15 million, almost three times the number of officially reported figures during that period .

The WHO calls this ” excess mortality ” and refers to the difference between the number of deaths that actually occurred globally and the normal number of deaths estimated based on years in which the pandemic did not occur.

It includes deaths directly caused by the COVID-19 epidemic, and indirect related deaths due to the impact of the pandemic on the health system and society.

“Measuring ‘excess deaths’ is an important part of understanding the impact of the pandemic.” Samira Asma, WHO Assistant Director-General for Data, Analysis and Delivery, said the new estimates are based on the best available data, Generated using sophisticated methods and complete transparency.

However, the Indian government was the first to express dissatisfaction with this latest WHO estimate.

WHO said in a statement released on May 5 that the latest estimates show that between January 1, 2020 and December 31 , 2021 , the global death toll directly or indirectly related to the COVID-19 epidemic was approximately 14.91 million ( The actual range is between 13.3 million and 16.6 million). During the same period, the WHO reported more than 5.4 million deaths from COVID-19. 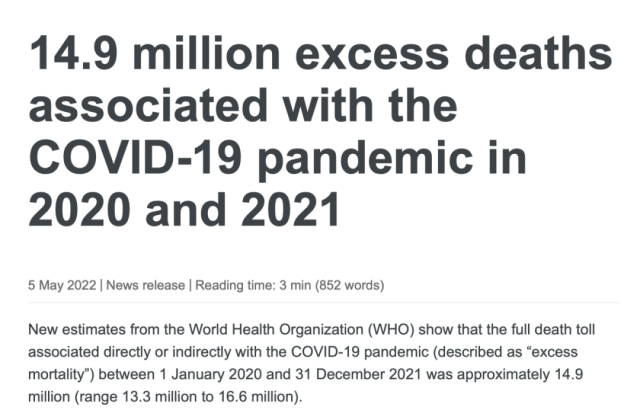 In addition, it also takes into account the lack of statistical tools in some countries and regions, and the lack of testing at the beginning of the outbreak.

However, the WHO noted that of the additional 9.5 million deaths, the vast majority were directly related to contracting Covid-19.

Statistics show that there are gender and age differences in COVID-19 deaths. Among them, the number of deaths among men is higher than that of women, with 57% of men and 43% of women . In addition, the death toll is higher among the elderly.

Calling the figures a “tragedy”, Asma said, “If we don’t count those deaths, we’ll miss an opportunity to prepare for the next pandemic”.

Steven Wolf, a professor at the Virginia Commonwealth University School of Medicine, told The Washington Post that the “excess death” count is a direct indication of how many people are dying because of the pandemic. With this data, public health experts and governments will have a better understanding of the death toll from the pandemic.

WHO Director-General Tedros Adhanom Ghebreyesus said, “This alarming data not only shows the impact of the pandemic, but also shows that countries need to invest more to build more resilient health systems in order to maintain essential health services during the crisis”.

At present, the global epidemic is still ongoing. WHO statistics show that although the number of new deaths globally has continued to decline in the past two months, more than 15,000 people still die every week due to infection with the COVID-19.

Why did India object?

Of the 14.91 million “excess deaths” estimated by the WHO , about two-thirds are concentrated in 10 countries, including India, Russia, Indonesia, the United States, Brazil, Mexico, Peru, and others.

Among them, nearly half of the deaths that have not been included in the statistics so far are from India.

The WHO said in the report that India’s “excess deaths” were about 4.7 million, which is almost 10 times the number of deaths officially reported in India .

According to the Washington Post, India’s “excess deaths” will mainly occur during the outbreak’s surge in May and June 2021 .

At the time, a raid by the delta variant paralyzed India’s health system, and many people died from lack of medical oxygen.

However, the Indian government strongly objected to this WHO data. The Indian Ministry of Health issued a statement on the 5th saying that it strongly opposes the WHO’s use of mathematical models to predict “excess deaths” and questioned the prediction models and data collection methods used by the WHO.

It emphasized that India’s registration of births and deaths is very sound, and the WHO should not ignore the real data released by India and use mathematical models to estimate India’s excess mortality.

The New York Times revealed in April that the WHO report had been delayed due to opposition from India.

It is worth noting that the Indian government released the country ‘s statistical death toll from 2018 to 2020 two days before the WHO released its latest estimate of “excess deaths” .

The Civil Registration System ( CRS ) death data released by the Indian government on May 3 showed that in 2020 , a total of 8.11 million deaths were registered in India, an increase of about 6% over the previous year , and the registered mortality rate reached 99.9% .

The Indian Ministry of Health said in a statement on the 5th that they shared this data with the WHO, but the WHO ignored these “real and available data” and made a “complete disengagement” based on various modeling. A discourse on reality”.

On April 25, 2021, local time, in Ahmedabad, India, a COVID-19 patient wearing an oxygen mask waits in an ambulance to enter the hospital for treatment. Figure/IC photo

According to Reuters, the WHO said that it has not yet fully analyzed the latest data provided by the Indian government, but in view of the continuous communication with India, the WHO may add a disclaimer to the report.

In fact, multiple independent studies have previously pointed out that the number of deaths from the COVID-19 in India is much higher than the officially reported number. According to the BBC , three peer-reviewed studies have found that as of September 2021 , India’s Covid-19 death toll was about six to seven times higher than officially reported.

The BBC pointed out that it is quite difficult to count the number of deaths in India, reporting that nearly half of India’s deaths occur at home, especially in rural areas. The United Nations estimates that about 70% of deaths in India have no medical cause of death certificate, and about 30% are not included in the statistics.

In India, Rahul Gandhi, chairman of the main opposition Congress Party, quoted the WHO report on social media on the 6th as saying, “Science never lies. Modi will. Please respect those families who have lost loved ones.” He Ask the Modi government to increase compensation for families who have died from the COVID-19.