Musk: use brain-computer interface to cure tinnitus within 5 years and solve brain and spinal cord injuries within 10 years

Musk: use brain-computer interface to cure tinnitus within 5 years and solve brain and spinal cord injuries within 10 years.

The human brain is arguably the most complex life structure ever built. Although there is still a long way to go to fully understand the brain, this does not prevent scientists in the field of neuroscience from making new progress.

There are about 86 billion neurons in the human brain, and there are 100 trillion connections between them. This is undoubtedly an unusually huge astronomical number

. You must know that the entire Milky Way has only 400 billion stars. But neuroscientists have made some major strides in mapping the complex roles of these brain neurons and their interconnections.

Recently, when interacting with netizens on Twitter , Musk said that the brain chip developed by Neuralink will definitely cure tinnitus within 5 years. 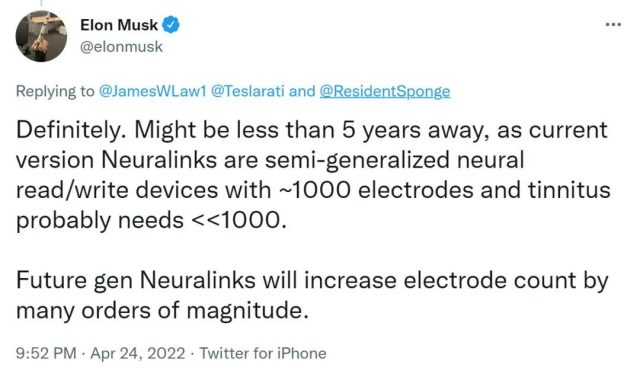 Specifically, the Teslarati website posted an interview with Musk on Twitter. In the interview, Musk said that Neuralink is expected to solve the problem of brain and spinal cord injuries within 10 years. In addition, this technology can also be solved by controlling appetite. health problems such as obesity.

At this time, a netizen commented on whether there was hope to solve the problem of tinnitus , and Musk replied that it is absolutely possible, and this problem will be solved within 5 years.

According to Neuralink, the Link Brain Chip is a new type of brain-computer interface that will in the future increase our connections to the visual , auditory , tactile and motor cortex of the brain, thereby helping treat various nervous systems including paralysis, Parkinson’s disease, epilepsy and more disease. It also expands the way we interact with others, with the world, and with ourselves.

The Link brain chip developed by Neuralink is implanted into the skull through a surgical robot, and thousands of tiny electrodes at one end of the chip are connected to neurons in the brain.

The chip is charged wirelessly and connected to devices such as mobile phones or computers via Bluetooth to record or participate in the regulation of neuronal activity. 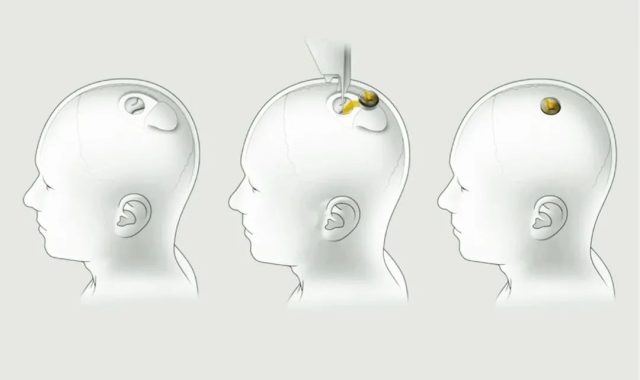 Neuralink has also released a ” wish list ” in 2020 that includes restoring mobility to the paralyzed, restoring light to the blind, enabling telepathy, uploading memories, and downloading memories and replacing them with new bodies , among others.

Let the monkey play the game through the mind

In April 2021, Neuralink released a world-beating video on Youtube of a monkey playing a ping pong video game called Pong .

The special thing is that the monkey named Pager has a brain chip developed by Neuralink implanted in the brain, and the whole game is controlled by the monkey’s mind .

The wirelessly rechargeable brain chip developed by Neuralink was implanted on both sides of the monkey’s brain to sense neuron activity .

The monkey then used a joystick to play a game of ping pong for a few minutes, letting the software find the Brain signals related to body movements.

After disconnecting the joystick, the monkey was able to play the game with only thought and win the game.

Neuralink said it will start human clinical trials by the end of 2022 , but the exact timing is subject to FDA approval.

Is what Musk said true?

Tinnitus refers to the abnormal sound hallucinations such as buzzing and neighing in the ear or in the brain in the absence of an external sound source.

Tinnitus is actually a common problem that occurs when the nerves connecting the inner ear and the brain are damaged due to prolonged noise, injury, or a lack of blood supply.

And there is currently no effective treatment, usually just covering it up or learning to ignore its presence.

And Musk’s brain chip generated by Neuralink will cure tinnitus within 5 years. Is he reliable?

In the early 1960s, the first cochlear implants were implanted in humans, and since then, neural implants have begun to develop rapidly.

Scientists are also generally optimistic that neural implants have the potential to treat tinnitus , as well as treat obsessive-compulsive disorder , repair brain damage , and use deep brain stimulation to treat autism or neurodegenerative diseases , among others.

As Paul Nuyujukian , director of Stanford University’s Brain Interface Laboratory, said: We are on the cusp of a radical paradigm shift.

Brain-computer interface technology has the potential to transform our treatments, not just for stroke, paralysis, and motor-degenerative diseases, but for nearly every other type of brain disease.

Therefore, Musk’s rhetoric of “cure tinnitus within 5 years” is not controversial at the level of basic science.

However, on February 10, 2022, the Physicians Committee for Responsible Medicine (PCRM) , an anti-cruelty nonprofit organization in the United States, accused Neuralink and its partner, the University of California, Davis, of mistreatment of laboratory monkeys.

The PCRM said it had evidence that Neuralink and partner UC Davis abused animals when testing brain chips on 23 monkeys, failed to provide the animals with the physical and mental care they needed, and used “unapproved substances” “carry out testing.

And the brains of these lab monkeys were so painfully processed that at least 15 monkeys died or were killed during or after the experiment.

Neuralink subsequently issued a statement denying the allegations, saying the alleged monkeys died, partly by euthanasia and partly by complications from the trial.

The deaths of these monkeys will prompt the company to develop “new surgical protocols and the design of fully implantable devices for future surgeries,” Neuralink said .

It’s unclear whether the episodes will affect Neuralink’s plans for human clinical trials.

In an interview with TED, Musk said that although Neuralink has not yet received FDA approval for human clinical trials, there has been a long queue of people willing to be tested.

Neuralink has received a lot of heartbreaking emails describing their tragic experiences, many in their prime, but lost their ability to exercise or even become paralyzed due to various reasons such as car accidents. And what Neuralink has to do is solve these problems and save them.

In addition to the huge prospects, we also need to consider the repair and removal of these devices if they fail, and whether there is a risk of brain damage or infection.

Also, if all goes well, will it end up at a price that only the rich can afford?

Musk: use brain-computer interface to cure tinnitus within 5 years and solve brain and spinal cord injuries within 10 years