Triple-negative breast cancer (TNBC) is the most aggressive type of breast cancer. Because it does not express hormone receptors and HER2, targeted therapy cannot be used. For a long time, TNBC patients can only receive surgery and radiotherapy and chemotherapy.

The emergence of immune checkpoint inhibitor therapy has brought new hope for TNBC patients, however, clinical trials have found that PD-1 inhibitors combined with chemotherapy can only benefit a small proportion of TNBC patients [1,2]. Therefore, it is crucial to explore the mechanism of TNBC resistance to immune checkpoint inhibitor therapy, which will provide a reference for improving the effect of immunotherapy.

They found that there is a group of quiescent tumor cells (QCCs) in TNBC that resist T cell killing. These QCCs, together with immunosuppressive fibroblasts and dysfunctional DC cells, form a microenvironment that resists T cell infiltration and killing by activating HIF1a.    Thereby surviving immunotherapy and causing tumor recurrence.

Previous studies have found that some genes play a role in tumor cell resistance to immunotherapy [4,5], but these studies cannot explain how tumor cells create an immunosuppressive microenvironment; in addition, sequencing can be used to find However, there are a large number of heterogeneous cell populations in tumor tissues, which greatly increases the difficulty of finding tumor resistance mechanisms. For example, cancer cells that lose tumor antigens and tumor antigen-positive cancer cells take different approaches in escaping from the immune system.

Since the TCR of Jedi T cells can only specifically recognize GFP but not mCherry . Therefore, this experimental model can be used to explore how tumor cells that continuously express tumor-specific antigens (GFP+ tumor cells) escape the attack of tumor antigen-specific T cells (Jedi T cells).

Immunofluorescence staining revealed that these escaped GFP+ tumor cells formed a cell cluster within which the level of T cell infiltration was reduced by a factor of two.

This suggests that the surviving GFP+ tumor cell clusters can prevent T cell infiltration, which may be one of the reasons for their resistance to immunotherapy. 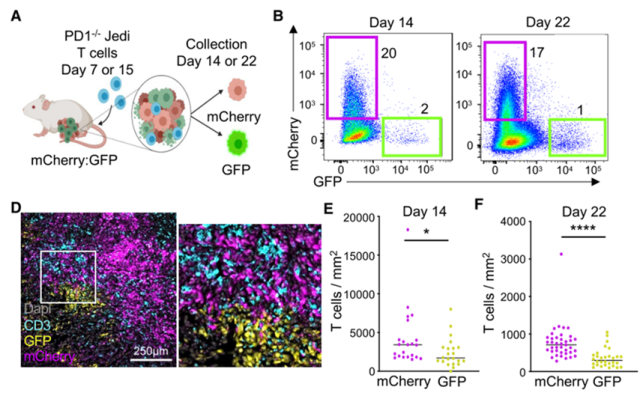 So are these QCCs more resistant to T cell killing? The research team transferred tdTomato-p27K into tumor cells, which enables QCCs to be labeled with tdTomato.

After transfusion of PD-1-/- Jedi T cells into tumor-bearing mice, it was found that most of the surviving GFP+ tumor cells were tdTomato+ compared with the control non-immunogenic miRFP670+ tumor cells, which indicated that QCCs had no effect on T cells. The killing has a stronger resistance.

The above results show that in mouse models, QCCs are the main force of immunotherapy resistance. Does this phenomenon also exist in human patients?

By analyzing the histopathological samples of breast cancer patients and transcriptome sequencing, the research team found that most of the tumor cells in contact with T cells in the tumor tissue were Ki67+ proliferating cells, and p27+ QCCs rarely contacted T cells ; Cluster analysis showed that tumor cells in immunotherapy-responsive patients were more enriched in DNA replication-related pathways than in treatment non-responders, suggesting that they were in a non-quiescent state.

This correlation suggests that QCCs may be associated with poor immunotherapy outcomes in breast cancer patients. 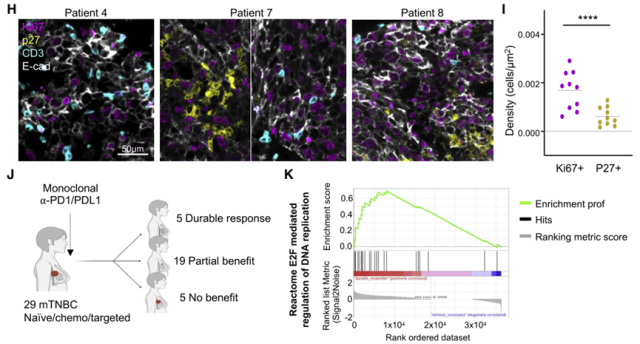 T cell infiltration around resting tumor cells is less in breast cancer patients’ tumor tissue, and tumor cells are in a cell cycle active state in patients who respond to immunotherapy

To explore the drug resistance mechanism of QCCs, the research team performed RNA sequencing on QCCs and non-quiescent tumor cells.

These data suggest that QCCs in breast cancer are predominantly located in hypoxic microenvironments with less T cell infiltration.

Next, to analyze the mechanism by which QCCs suppress T cell function at the single-cell level, Prof.

Through data analysis, it was found that there were a large number of immunosuppressive fibroblasts in the QCCs cell clusters , which explained why the number of infiltrating T cells in the QCCs area was low.

What groups of cells are contributing to T cell dysfunction? By scoring the hypoxia characteristics of each infiltrating cell subset in QCCs, the research team found that DC cells expressed abundant hypoxia-related genes, and down-regulated genes that promote T cell activation, such as MHC I and MHC II, IL-12, CD80/86, It is shown that the ability of these DC cells to promote T cell activation is greatly attenuated, which may be an important reason for the dysfunction of T cells infiltrating inside the QCCs cell clusters.

However, Professor Agudo’s team found through hypoxia induction experiments that hypoxia does not directly impair the ability of DC cells to activate T cells, so the research team turned their attention to QCCs themselves.

Tumor-bearing experiments showed that compared with WT tumors, HIF1a STBL -expressing tumors had fewer infiltrating T cells and deeper depletion; MHC II expression was significantly down-regulated on intratumoral DC cells, which was consistent with what was observed within the QCCs cell clusters. Basically the same. 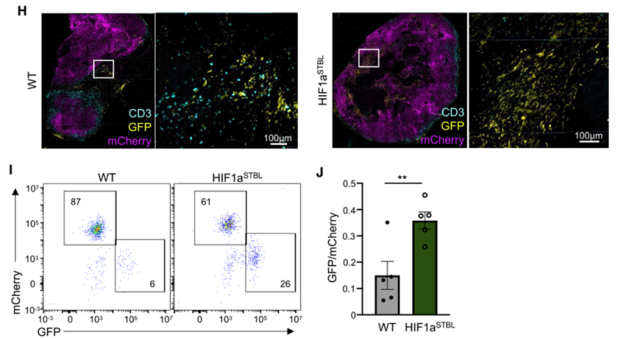 Based on the above data, it can be seen that QCCs create an immunosuppressive microenvironment through high expression of HIF1a and escape the pursuit of tumor antigen-specific CD8+ T cells. So can knocking out HIF1a in tumor cells promote T cell killing of tumors?

This suggests that targeting HIF1a in tumors can promote anti-tumor immune responses and inhibit tumor growth.

Collectively, this study sheds light on the mechanism by which tumor antigen-positive cancer cells escape immune: they aggregate into clusters and summon fibroblasts to build a barrier for them; together they enter a quiescent state and overexpress HIF1a, allowing the immune system to Sentinel-DC cells are dysfunctional, which in turn suppresses T-cell immune responses. These efforts allowed them to escape T cells and make a comeback after immunotherapy.

At the same time, the results of this study also suggest that eradication of QCCs is the key to improving the effect of TNBC immunotherapy and preventing tumor recurrence.