Monkeypox virus infection has occurred in many countries around the world. It is a close relative of smallpox and has a fatality rate of 10%.

On May 18, Bavarian Nordic announced that it had been awarded a vaccine manufacturing contract from the U.S. Biomedical Advanced Research and Development Authority (BARDA) , with the first vaccines expected to be produced in 2023.

Monkeypox virus infection has occurred in many countries around the world. It is a close relative of smallpox and has a fatality rate of 10%.

A dramatic increase in the number of reported cases followed.

That night, that number increased to 107 cases.

In addition to the rapidly increasing number of cases, another cause for concern is that the monkeypox virus is spreading from person to person .

The UK’s first case recently travelled to Nigeria, where a previous monkeypox outbreak has occurred, but many of the newly confirmed cases have not travelled there, suggesting that community transmission of the monkeypox virus has begun .

Monkeypox virus belongs to the genus Orthopoxvirus, the same genus of viruses as the variola virus that causes smallpox.

The last cases of smallpox in the world occurred in the late 1970s. On May 8, 1980, at the 33rd World Health Assembly, smallpox was declared eradicated.

Only laboratories in the United States and Russia currently hold smallpox virus. Smallpox virus has been completely eliminated by humans in nature.

Smallpox is one of the most terrifying infectious diseases in human history, with a fatality rate as high as 30%.

The monkeypox virus is very similar to smallpox, with a fatality rate of about 10%. Because of the similarity of the two viruses, the smallpox vaccine should have cross-protected against monkeypox .

Studies have shown that the smallpox vaccine is at least 85% effective in preventing monkeypox.

The smallpox vaccine Jynneos , developed by Denmark-based vaccine company Bavarian Nordic , was approved by the U.S. FDA in 2018 for the prevention of smallpox and monkeypox infections in high-risk adults over the age of 18 .

On May 18, Bavarian Nordic announced that it had been awarded a vaccine manufacturing contract from the U.S. Biomedical Advanced Research and Development Authority (BARDA) , with the first vaccines expected to be produced in 2023.

Within a few days of developing a fever, patients develop a rash that usually starts on the face and spreads to other parts of the body.

The incubation period (the time from infection to onset of symptoms) for monkeypox is usually 7-14 days, but it can be 5-21 days.

In Africa, monkeypox has been reported to kill as many as 10% of those infected.

The natural host of monkeypox virus is still unknown.

Bavarian Nordic currently has a total of 4 vaccine development pipelines. Its smallpox vaccine , Jynneos , was approved by the US FDA in 2018 for the prevention of smallpox (smallpox) and monkeypox (monkeypox) infection in high-risk adults over 18 years old .

At present, the company is developing the lyophilized powder form of this vaccine, and the clinical phase 3 has been completed.

In addition, the company has a respiratory syncytial virus (RSV) vaccine in clinical phase 3, and a new coronavirus (SARS-CoV-2) vaccine, which uses capsid virus-like particles (cVLPs) technology, and is about to start a Phase 3 clinical trial.

The company also has a tumor vaccine in Phase 1/2 clinical trials for the treatment of patients with HER2 and brachyury gene-positive cancers. It enhances the killing and clearance of tumors by the immune system by enhancing T cell activity and changing the tumor microenvironment. 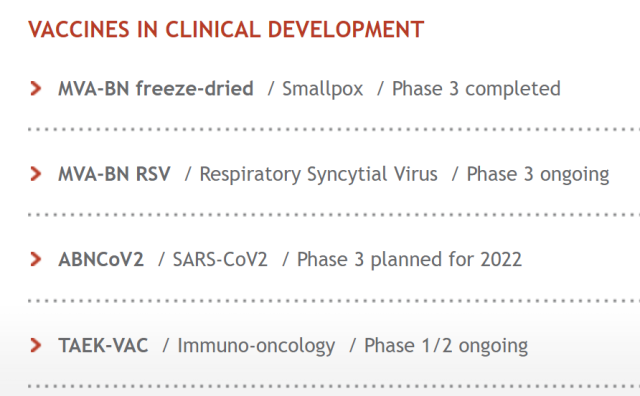