FDA may revise approval path to avoid some procedures abused by pharmaceutical companies.

On June 7, 2021, despite the almost unanimous opposition of the Peripheral and Central Nervous System Drugs Advisory Committee, the FDA still accelerated the approval (AA) of Biogen’s new Alzheimer’s drug, Aducanumab, as soon as the news came out caused great controversy.

Three members of the advisory committee resigned in protest of the decision, and the approval has since become the subject of multiple investigations by U.S. federal regulators, with multiple hospitals rejecting aducanumab, dimming its post-market sales.

At the same time, the AA of the FDA has also been questioned in the field. Some experts believe that the FDA puts supervision above science, which allows companies to exploit loopholes and may cause a series of adverse chain reactions.

Nearly a year has passed since the Aducanumab incident. On May 13, “Nature” commented again, after this controversial incident, will the FDA modify the “Accelerated Approval” (AA) path? 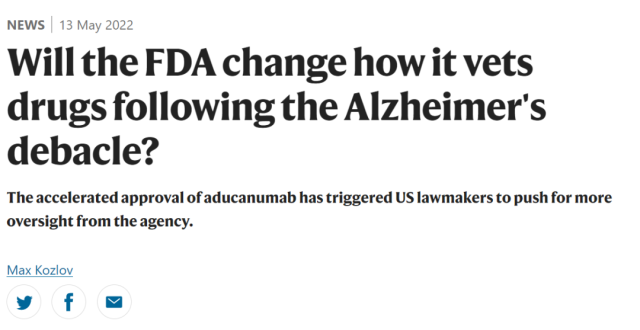 In May, The House Committee on Energy and Commerce, which oversees drug safety and biomedical research, announced that if a drug company failed to complete follow-up studies in a reasonable time, it wanted to grant the FDA a larger The power to withdraw drugs marketed through the AA.

The proposed provision, which is part of the FDA’s funding reauthorization bill, is expected to pass by September of this year.

Diana Zuckerman, president of the National Center for Health Research, a nonprofit organization in Washington, D.C., said: “The more common the pathway becomes, the more it’s intended to be changed. AA started as a special pathway for a few drugs, but now Most antitumor drugs go through AA or other accelerated approval pathways.” 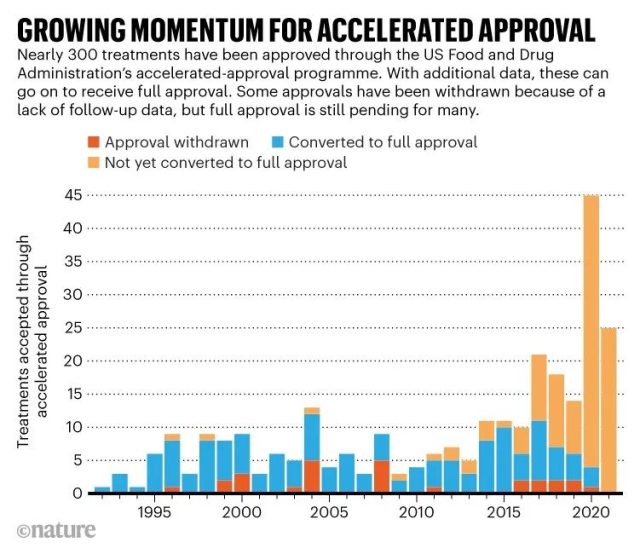 Additionally, requiring follow-up studies is part of the AA pathway, but pharmaceutical companies have been slow to do so.

However, the FDA has limited power to mandate their data. The proposed legislation could give the FDA greater powers, although significant changes could still occur when passed by the House and Senate.

In February, FDA Commissioner Robert Califf pledged days before his appointment to make AA reform a priority for the agency.

Researchers interviewed by Nature also said that reforms are urgently needed to protect the integrity of the process, and the legislative proposal is a good start.

They also recommend stronger institutional oversight and other reforms to further prevent drug companies from abusing this route to market.

Drug companies are not using the path as intended, and too many are trying to find loopholes and then fix them, said David Mitchell, president of Patients for Affordable Drugs, a nonprofit in Washington, D.C. use. David Mitchell is the consumer representative for the FDA’s independent committee to review antineoplastic drugs.

The FDA created the AA Pathway in 1992, primarily in response to the HIV-AIDS crisis, to bring much-needed drugs to market quickly.

Gregg Gonsalves, an epidemiologist and global health expert at Yale University in Connecticut, USA, was part of a team that convinced the FDA to go this route. “We’re pushing this accelerated pathway because people are dying, I’m HIV positive myself, and I’m desperate and need hope,” he said.

The creation of the AA pathway has resulted in a significant increase in the number of immunotherapies and novel anti-tumor therapies on the market.

Some of these drugs have limited data on the clinical benefits, but cost patients hundreds of thousands of dollars a year.

Gonsalves believes that this route has been used by pharmaceutical companies to speed up approvals. Compared with the time required to go to market through the standard route, the time required for antitumor drugs approved for marketing through the AA route can be shortened by an average of 3 years, and may be marketed with a single-arm study with a surrogate endpoint.

One of the big problems with AA is that companies don’t follow through on their commitments to respond to drugs in a timely manner, says Caleb Alexander, an internal medicine and epidemiologist at the Johns Hopkins Bloomberg School of Public Health in Maryland. Post-marketing studies are conducted to determine the clinical benefit of the drug.

Some experts questioned whether the time reserved for pharmaceutical companies to do confirmatory research was too loose.

A 2021 analysis found that 13% of AA-approved drugs between 1992 and 2016 did not convert to full approval within 5 years – without the data needed to convert them, they are still on the market. The average time is 9.5 years.

A spokesman for the Rare Disease Company Coalition said post-market clinical trials can take a long time, especially for diseases that progress slowly, such as neurodegenerative diseases.

In addition, it is difficult for drug companies to recruit subjects, because people want to use fully approved drugs, and do not want to risk taking placebos.

Diana Zuckerman said the FDA can’t ask a company to stop selling a drug that hasn’t been converted to a fully approved drug, usually a voluntary withdrawal by a company. Caleb Alexander said: Once the drug is approved, the FDA loses his huge influence.

For example, in 2011 the FDA withdrew its accelerated approval of bevacizumab for lack of clinical benefit in breast cancer, which was met with public backlash because breast cancer patients wanted to maintain the approval.

For many, AA offers “precious hope,” the National Organization For Rare Disorders, a nonprofit in Danbury, Connecticut, noted in a 2021 report. But Mitchell, who suffers from multiple myeloma, said: “It’s not the FDA that gives me hope, it’s not hope that keeps me alive, it’s safe and effective drugs.

FDA spokeswoman Jeremy Kahn said in an email that the FDA is committed to ensuring the integrity of the AA pathway and that for people with severe disease who lack treatment options, they are willing to “accept new and uncertain clinical benefits that exist. therapy”. The vast majority of AA drugs have proven clinical benefit, he added.

Will changing regulations solve the problem?

The FDA’s AA path has been followed by regulators in other countries, but the European Union and Japan have given their drug regulators more power to require companies to submit data from confirmatory trials within a set time frame or withdraw their approval.

It’s unclear exactly how much of an effect the proposed regulatory changes will have on FDA’s oversight.

These provisions would make it easier for the FDA to revoke approvals, but could also prolong the bureaucratic process of revoking approvals.

Diana Zuckerman said she prefers to stick to an earlier proposal to automatically withdraw approval once a confirmatory trial is overdue for a year.

Caleb Alexander suggests using health insurance as leverage. For example, the Centers for Medicare and Medicaid Services (CMS) in Baltimore can decide which drugs to fund.

Earlier this year, CMS said it would pay only $28,800 a year for the drug only for people enrolled in clinical trials, amid concerns about the efficacy of aducanumab.

The decision is almost unprecedented, and Caleb Alexander believes that CMS should consider reducing reimbursement rates for other AA drugs that have not yet been fully approved. Such a move, he said, could “ignite a fire for drug companies” and push them to complete the trial. “Why should the taxpayer pay for the full price of a drug when we don’t know the full safety and efficacy of a drug?” he asked.

But Mitchell worries that cutting the reimbursement ratio will deprive pharmaceutical companies of the incentive to develop drugs that are urgently needed in the clinic.

After being diagnosed with myeloma, he believes that three accelerated approval drugs have kept him alive. He also said the Aducanumab incident was just a “fluctuation” in the great process of AA, which has drawn more attention to the need for confirmatory trials of some drugs.

Reform is not so simple. Once a drug enters the market, pharmaceutical companies are not eager to find a reason to stop production.

Still, many researchers and drug safety advocates are eager to see change. Diana Zuckerman said: “We started trying to correct a pendulum that was going in one direction, and look at how far we’ve gone in that direction.”