The “windfalls” of COVID-19 vaccines and treatments have changed the rankings of global biopharmaceutical companies in unprecedented ways , but these changes are likely to trend toward the most painful patent cliffs ahead and a challenging global environment.

We should shift some of our focus to the expected non-COVID uptick and act with more clarity.

Let’s focus on the following aspects. 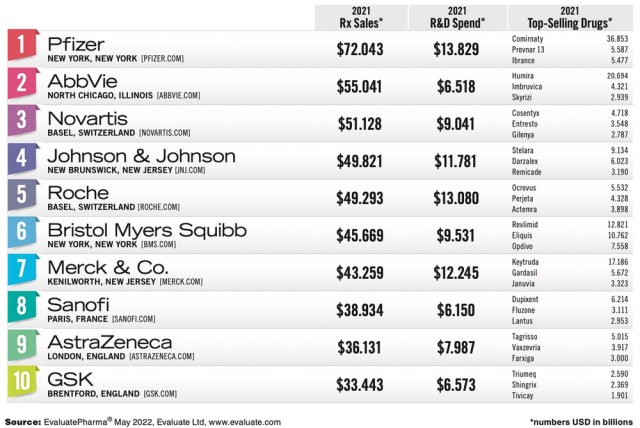 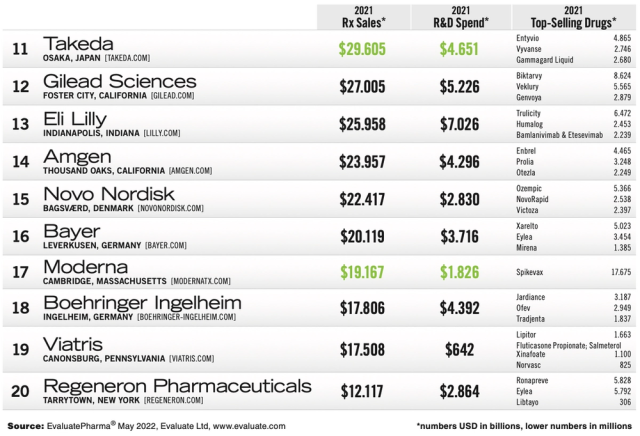 The Pharmaceutical Executive annually ranks the world’s top 50 biopharmaceutical companies based on prescription drug sales, reflecting drug sales performance over the past year, as well as the company’s R&D spending.

And this year’s latest ranking is destined to be recorded in history. Even if we look back decades later, last year’s outbreak was only a flash in the pan, but its impact was amazing enough.

To illustrate the historic impact of the Covid-19 pandemic on the annual list, let’s take a look at a few of the top companies that made a big impact.

The first focus is on mRNA vaccine makers Pfizer and Moderna.

Pfizer’s total prescription drug sales were $72 billion last year, with $37 billion coming from the COVID vaccine Comirnaty, the best-selling drug ever in a single year.

Pfizer’s oral COVID-19 treatment Paxlovid, which received emergency use authorization from the FDA in December 2021, had $1.5 billion in sales in the first quarter of this year and could become the best-selling drug of all time if it hits Pfizer’s projected $22 billion in sales this year of non-vaccine drugs .

Pfizer said Paxlovid will produce 120 million courses of doses this year, and according to published reports, sales of those doses do not need to be all sold to exceed $22 billion.

If the ramp-up and total sales do well, Paxlovid could surpass the record $20.7 billion in 2021 sales set by Abel Humira, the highest-grossing non-vaccine drug to date.

However, these rosy prospects have recently encountered headwinds, including a warning from the US CDC that “COVID recurrence may occur after taking Paxlovid.”

Is the profiteering sustainable?

Of all the COVID-related developments, Pfizer and Moderna are among the few biopharma companies that have reaped windfall returns after successful development.

Judging from the numbers mentioned above , it is reasonable for Pfizer to jump from the previous ranking of No. 8 to No. 1 this year. Its sales of prescription drugs increased by 102% year-on-year.

In fact, Comirnaty sales alone put Pfizer in No. 9 this year.

In May, the pharma giant just reported its best quarterly sales in company history, with total revenue of $25.6 billion; full-year 2022 revenue is expected to be between $98 billion and $102 billion.

Leveraging the mRNA platform in COVID-related development is Moderna’s vaccine Spikevax, which has 2021 sales of $17.7 billion, propelling the U.S. biotech company into the Top 50 for the first time. Moderna ranked 17th with $19.2 billion in prescription drug revenue.

Moderna sold $5.9 billion of its COVID vaccine in the first quarter of this year and expects Spikevax to reach $21 billion in sales for the full year.

With the help of REGEN-COV (Ronapreve), an antibody cocktail used to prevent COVID-19 symptoms, Regeneron jumped eight spots to No. 20 in this year’s Top 50 , and its prescription drug sales rose 118% to 121 One hundred million U.S. dollars.

REGEN-COV is effective against the original COVID variant, with 2021 sales of $5.8 billion.

Others whose rankings have changed significantly due to the impact of the COVID-19 epidemic are AstraZeneca, whose vaccine Vaxzevria sales reached $4 billion last year, helping its prescription drug sales increase by 41.5%, AZ ranking rose 2 places to 9th ; Geely Germany rose one spot to 12th with its antiviral drug Veklury (remdesivir) (13.4% sales growth), which recorded $5.6 billion in revenue; Johnson & Johnson’s 2021 prescription drugs generated $49.8 billion in sales, topping the list Fourth on the list, up 15.5% from the previous year, its COVID vaccine 2021 revenue of $2.39 billion.

Perhaps a factor that will affect next year’s rankings will be the approval of a COVID-19 therapy or vaccine for emergency use or expanded use in the U.S. and/or Europe in late 2021 or early 2022, with major beneficiaries including Eli Lilly, Merck, GSK and Sanofi .

The question is, how long will these billions or even tens of billions of dollars continue?

Analysts agree that products approved for the first time during the pandemic may have peaked, or peaked this year, and sales are likely to decline from their highs.

However, large contextual factors should also be properly weighed, after all, the COVID-19 pandemic is an extremely special and unforeseen situation for the life sciences and medical industries, triggering unprecedented levels of R&D and final product sales and delivery. reaction.

It may not be fair to compare sales of COVID products to other drugs in the traditional sense.

The impact of the epidemic is unprecedented, and after this year, it is unlikely that a potential new record will appear in the short term.

But now, demand for COVID vaccines and drugs is on the decline.

Lisa Urquhart, editor of Evaluate Vantage in London, said: “I think most developed western countries that can pay higher prices have already bought enough vaccine stocks . Vaccines, there is debate. If the new strains continue on a mild trend and the US follows the UK, then I think some of the drug companies’ sales targets may not be achieved. This also means that they will now have to start moving beyond the western world of emerging markets, where the margins would be much lower.”

According to reports, Pfizer Comirnaty’s sales in 2023 are estimated to be about $17 billion. Both Comirnaty and Paxlovid are expected to generate between $2 billion and $4 billion in revenue by 2025.

Analysts’ forecast for Moderna’s Spikevax vaccine is for annual sales of about $2 billion by 2026. Moderna’s post-COVID strategy will be closely watched.

Regeneron did not report U.S. sales of REGEN-COV in the first quarter after the FDA revoked its authorization of REGEN-COV in January due to its poor performance against Omicron.

Roche entered into a profit-sharing agreement with Regeneron to sell the drug outside the United States, and its revenue for the reporting period was $636 million.

In addition, analysts believe that biopharmaceuticals are approaching the most painful patent cliff period in at least 30 years . (Click for details) This will be the most painful period for the decline in sales of original research drugs.

As this decade progresses, Top 50 pharmaceutical companies’ The overall situation may become a little unstable.

The rise of AbbVie

Drug spending in the U.S. rose 12% last year, spurred by COVID vaccines and treatments , while the rate of new prescriptions for chronic and acute care has largely recovered from the pandemic-induced slowdown, according to a report from IQVIA.

The U.S. pharma giant’s prescription drug revenue jumped nearly $11 billion to $55 billion last year, and AbbVie moved up one spot to No. 2 behind Pfizer.

AbbVie’s flagship product, Humira, delivered record sales last year , but its U.S. patents will expire in 2023, when biosimilars are bound to be available in the U.S.

It was eclipsed this year (most of Humira’s sales come from the U.S. market, and it has lost its patent in Europe).

While Humira is unlikely to contribute more than $20 billion in annual sales to AbbVie after 2023, Urquhart doesn’t think U.S. sales will decline as sharply as in Europe because of a different reimbursement structure in the U.S. doctors in the U.S. Reluctance to replace the original drug with biosimilars, the demand for this anti-TNF rheumatoid arthritis drug is expected to continue for quite a long time.

According to Evaluate, AbbVie will become the largest pharmaceutical company by sales of prescription drugs by 2028 . 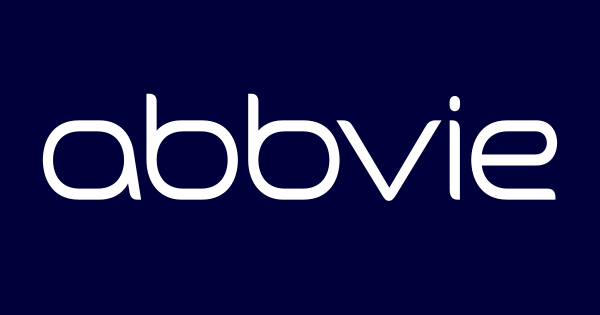 Driven by COVID- 19 investment, the combined R&D investment of the 11 largest pharmaceutical giants will grow by 11% in 2021, surpassing $100 billion for the first time, according to Evaluate.

Wet AMD and DME are the two leading causes of vision loss in American adults.

Novartis made company news in April with plans to restructure its global operations.

The first will be to consolidate the pharmaceutical and oncology business units into a single unit, a move that could lead to thousands of layoffs .

It was also aimed at boosting Novartis’ presence in the U.S., where quarterly sales of its blockbuster heart-failure drug Nucinto (sacubitril-valsartan) rose 42% to $1.1 billion.

With the new organizational structure in place, Novartis expects to save nearly $1 billion annually by 2024, while ensuring a compound annual growth rate of at least 4% from 2020 to 2026.

At present, Novartis is still considering the fate of Sandoz, its generic drug unit. In October last year, Novartis said it was considering spinning off or selling Sandoz to focus on the development of innovative drugs.

In February this year, Novartis further stated that it will make a final decision on the fate of Sandoz in 2022. 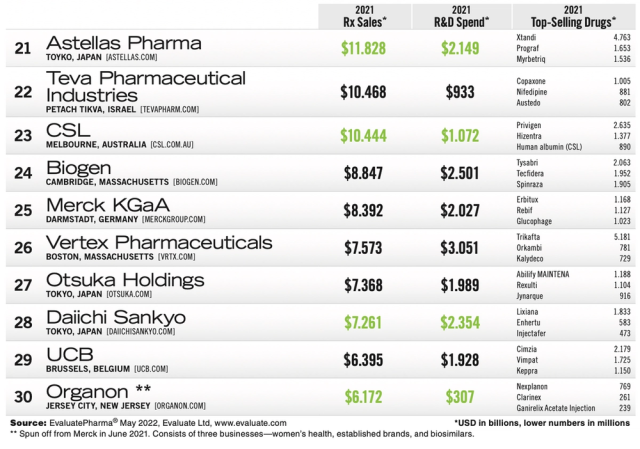 Among them, BMS faces the greatest maintenance pressure, and its pipeline is also the “oldest” .

72% of its revenue in 2021 will come from old products that have been on the market for more than 10 years.

With the expiration of patents, the situation is not optimistic.

Among BMS’ existing pipelines that could potentially offset the looming patent loss is Camzyos , which was just approved in the U.S. in April as the first drug to treat an inherited form of heart failure known as obstructive hypertrophic cardiomyopathy.

Merck’s PD-1 masterpiece K, which made $17.2 billion in sales in 2021 and amassed a number of indications, will also lose market exclusivity in 2028, with patents for its diabetes drug Januvia (sitagliptin) set to close Expires next month.

Like Novartis, Sanofi and GSK are reorganizing, with Sanofi focused on streamlining its generic drug pipeline.

GSK spun off its consumer health business into a separate company called Haleon, which will be officially launched next month.

Haleon is the result of GSK and Pfizer’s merger of consumer health units in 2019, and Pfizer now intends to exit its 32% stake in Haleon, which will recoup $16 billion in cash flow for Pfizer.

In late May, GSK decided to buy clinical-stage biopharmaceutical company Affinivax for up to $3.3 billion, bringing a new pneumococcal vaccine to GSK’s pipeline.

In May, the FDA approved Lilly’s dual GIP and GLP-1 receptor agonist Mounjaro (tirzepatide) to improve glycemic control in adults with type 2 diabetes. Mounjaro represents the first new type of diabetes drug in nearly 10 years, with impressive results in both fighting diabetes and weight loss. If the drug lives up to expectations, Eli Lilly’s ranking may jump up in the future.

Although Takeda fell to No. 11, prescription drug sales rose 6.1%. Two of its top-selling drugs, Vyvanse and Gammagard Liquid, both came from acquisitions, reflecting Takeda’s M&A propensity. 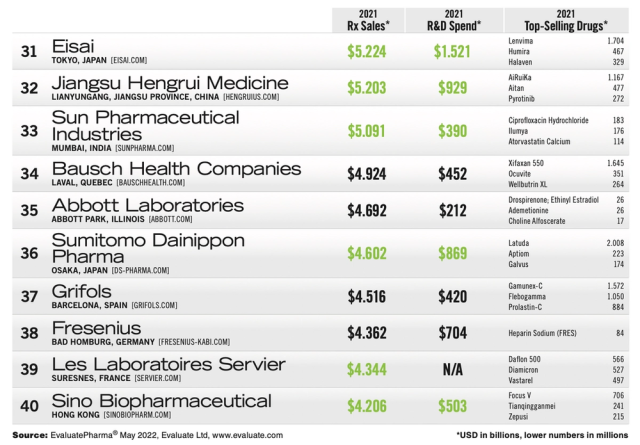 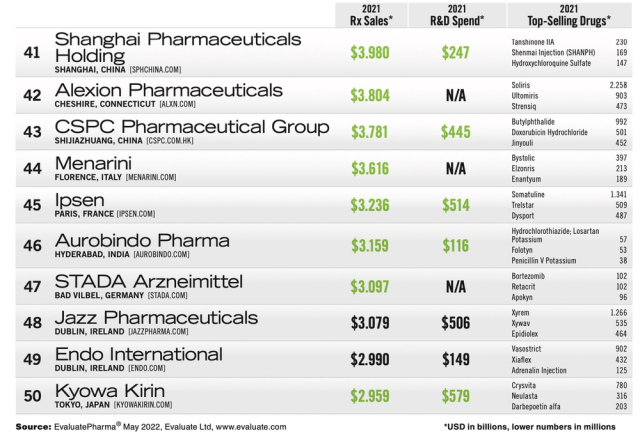 Aside from Pfizer’s $11.6 billion acquisition of Biohaven’s semi-scale last month, the slowdown in biopharma M&A continued into the first half of 2022. The prospects for a restructuring of the top 50 big pharma through may be slim.

2022 is expected to remain a tough year overall , although the top 15 pharma giants have enough cash on hand to acquire the entire U.S. small and mid-sized biotech sector (including at least 640 companies with market caps of $0-$5 billion).

At present, both buyers and sellers seem to be adopting a wait-and-see attitude, perhaps sticking to the principle of “cash is king”.