Is there any special significance to September 1st ? Yes, this day is “World Alzheimer’s Day” .

Everyone is familiar with Alzheimer’s disease (AD), which is also commonly known as “senile dementia”. 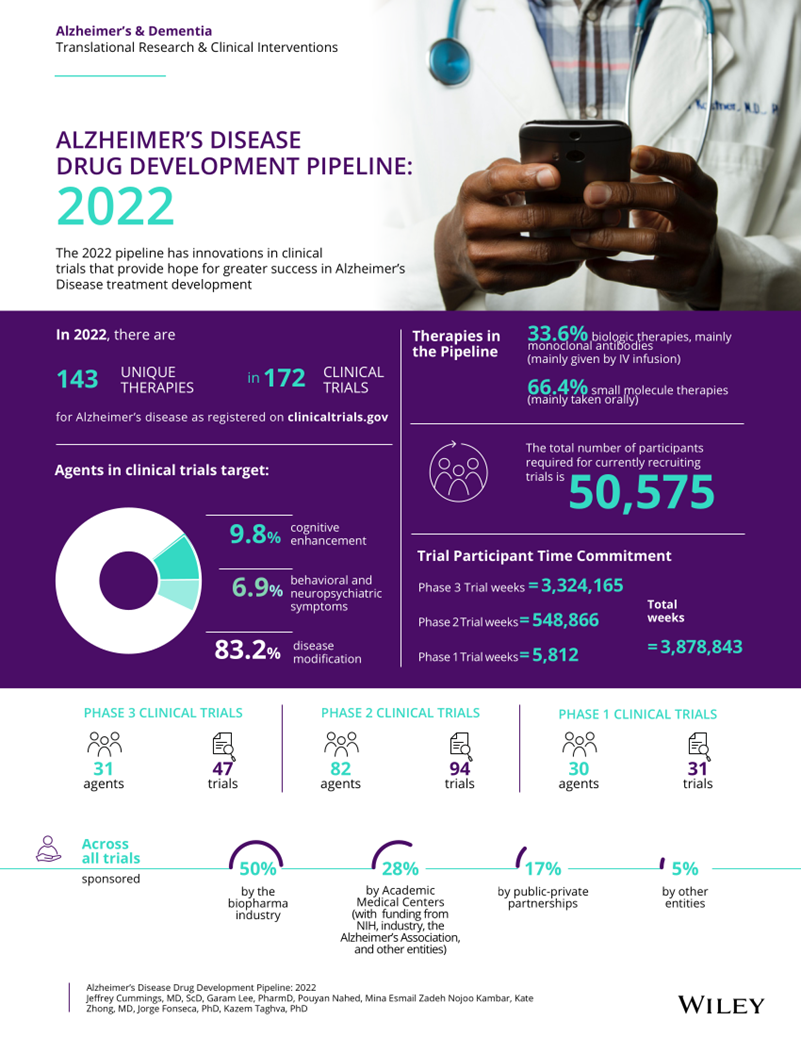 This is a primary degenerative disease of the nervous system , showing a persistent high-level neurological dysfunction, that is, in the absence of disturbance of consciousness, memory, thinking, analysis and judgment, visuospatial recognition, emotion, etc. obstacle.

As the size of the elderly population grows, so does the number of Alzheimer’s disease (AD). There are 9.83 million people with silent disease. There are currently 6.2 million AD patients in the United States, and by 2050 this number will reach 12.7 million.

In addition to AD patients in the dementia stage, there are approximately 10 million people in the United States with mild cognitive impairment (MCI), of which half (5 million) have MCI due to AD.

The global prevalence of AD dementia will increase from the current 50 million to 150 million by 2050, with the majority of those affected living in low- and middle-income countries. The cost of caring for someone with Alzheimer’s disease and related dementia (ADRD) is estimated to be $355 billion in 2021.

Due to the increase in the number of AD patients and the growing public health crisis posed by the disease, the heavy care burden urgently requires treatments to prevent, delay the onset, slow progression, and improve symptoms of AD.

This review , published in March 2022 in Alzheimer’s and Dementia by Jeffrey Cummings et al., reviews current clinical trials and drugs in development for the treatment of AD .

In this review, they used a combination of artificial intelligence (AI) and machine learning (ML) to analyze data from the U.S. National Library of Medicine and clinicaltrials.gov. Contains 172 trials with 143 drugs .

Most of the drugs evaluated are disease-modifying drugs (DMTs) targeting various biological processes involved in AD.

The mechanism of action (MoA) and main trial characteristics of these drugs are summarized.

The update deadline for all data was January 25, 2022, and the analysis included all trials of Phase 1, 2 and 3 drugs.

Figure 1 shows all AD drugs (both biologics and small molecules) currently in clinical trials. The most common drug under investigation was DMT (119 drugs, or 83.2% of all drugs in trials), disease-modifying therapy; 24 (16.8%) were symptomatic drugs, of which 14 (16.8% of all drugs in trials) 9.8%) were drugs targeting cognitive enhancement, and 10 (6.9% of all trial drugs) were drugs used to treat neuropsychiatric and behavioral symptoms. 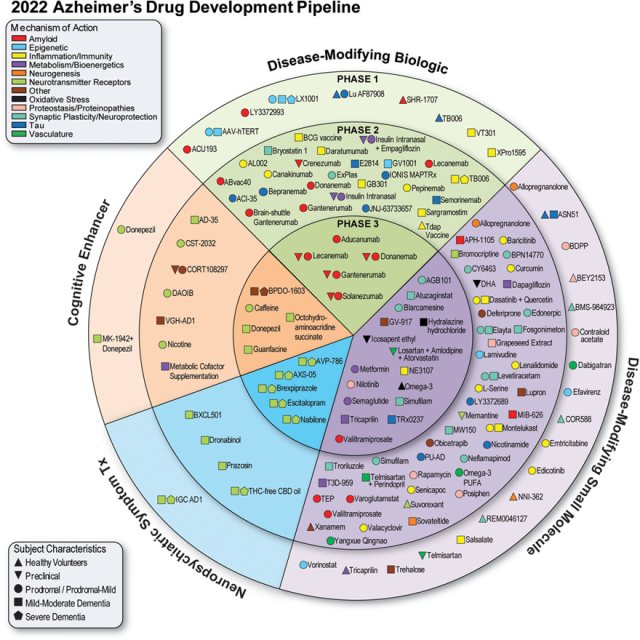 Five (16.1% of stage 3 drugs) were cognitive-enhancing drugs and five (16.1%) were for behavioral symptoms.

Thirteen of the Phase 3 drugs (42%) were repurposing treatments approved for another indication . In the past year (2021), four Phase 3 drug trials have been completed or terminated.

Figure 2 The mechanism of action of the third-stage drug 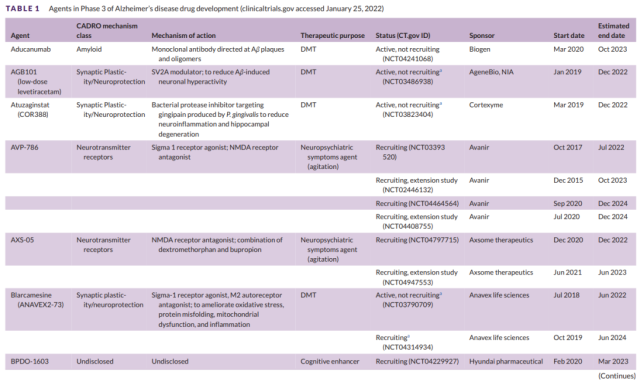 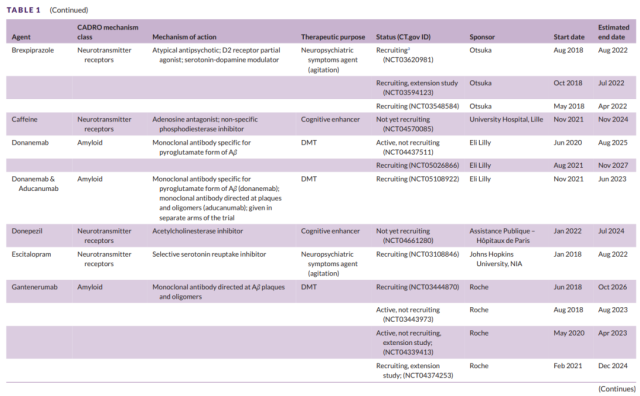 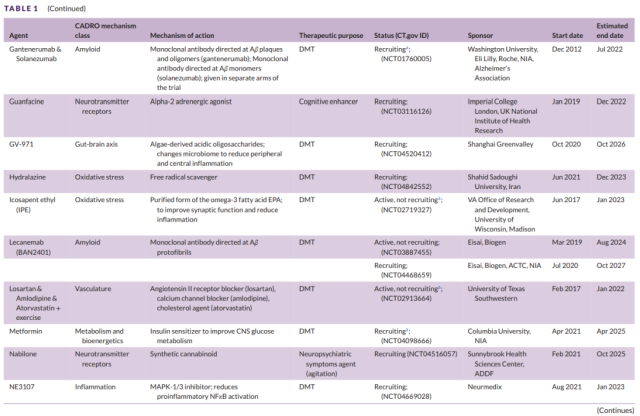 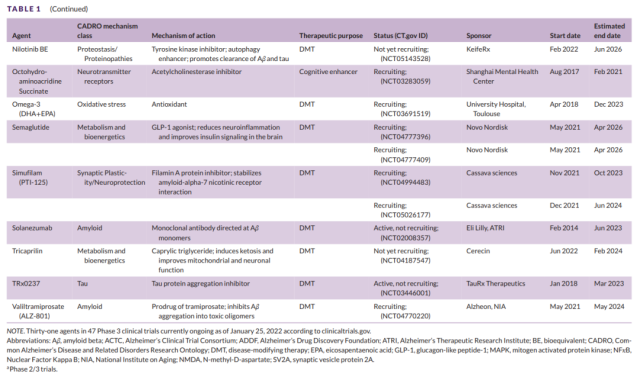 Figure 3 shows the mechanism of action of the second stage drug. In the past year (2021), 23 Phase II drug trials have been completed or terminated. There are five trials involving cell therapy in Phase 2 (see Table 4 for details).

Figure 3 The mechanism of action of the second-stage drug 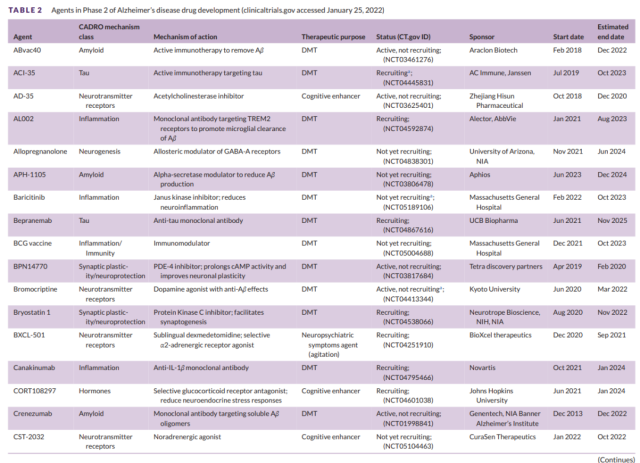 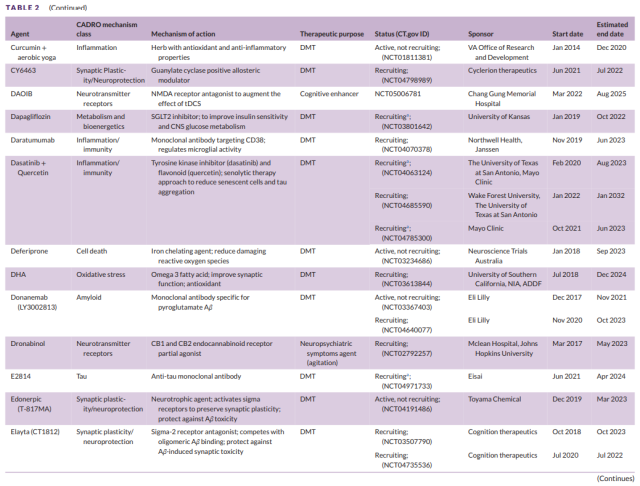 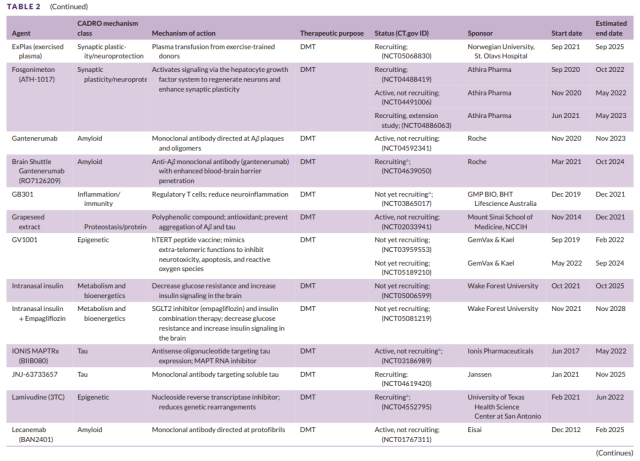 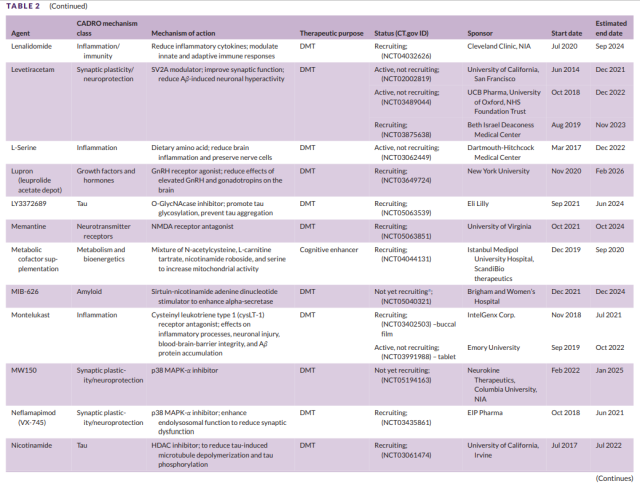 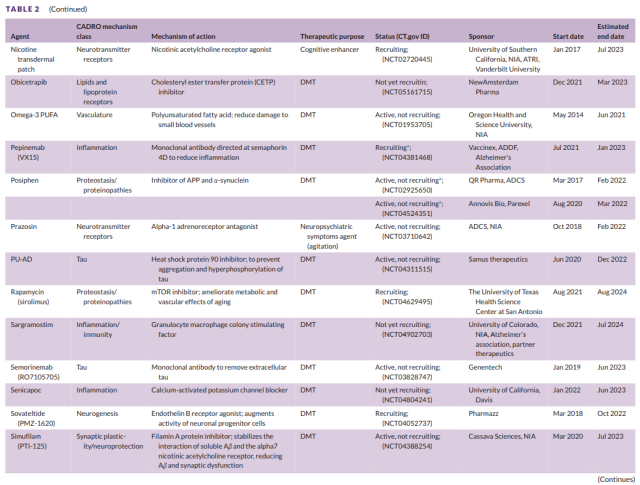 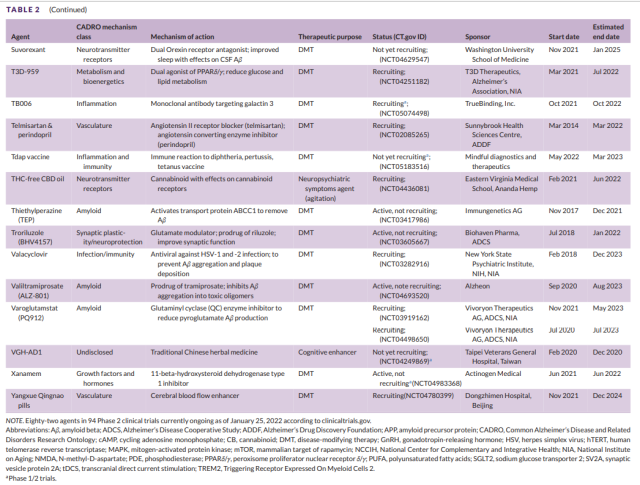 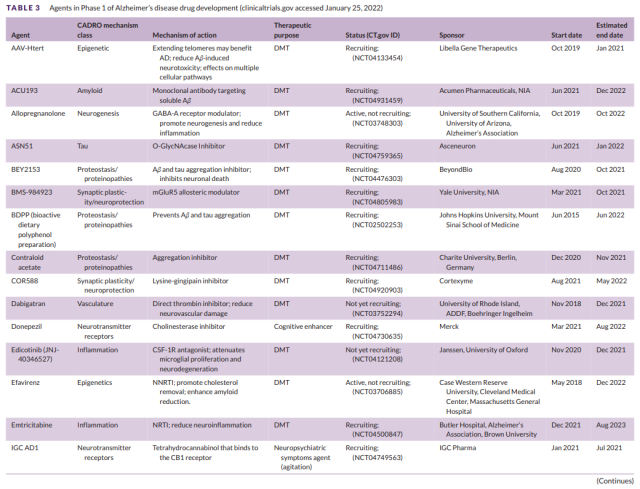 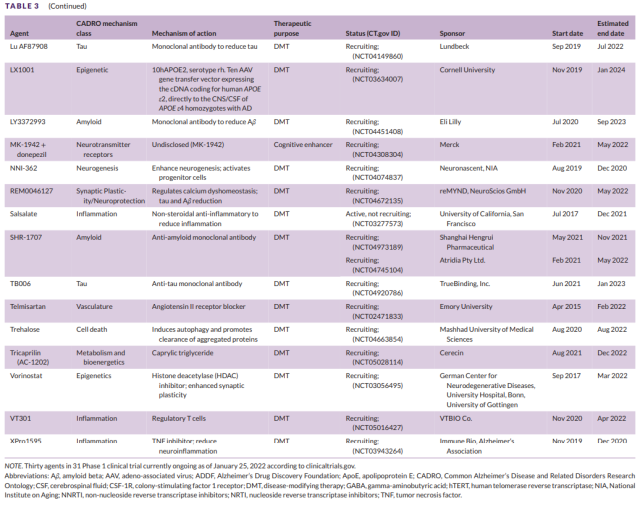 Table 5 shows the biomarkers used as judgment criteria or outcome measures in DMT’s current Phase 3 and 2 AD clinical trials on clinicaltrials.gov, but may not be complete here, as some trials do not state whether biomarkers are included . 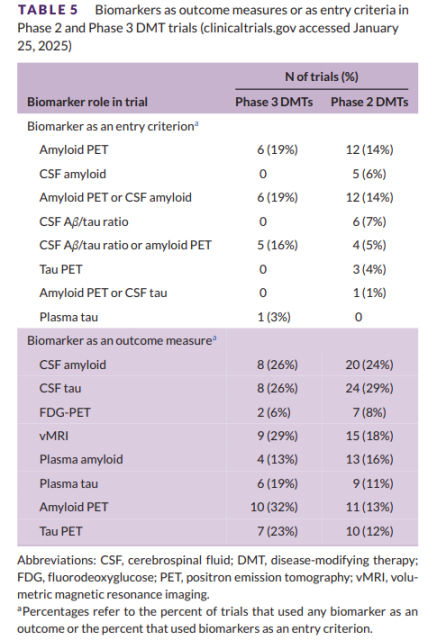 Including all currently ongoing trials, the total number of participants required is 50,575.

Table 6 shows the main trial types, the average duration of treatment exposure (in weeks) for each trial, and the number of participants required for each trial.

This indicates that of all ongoing trials, 3,878,843 people will be involved in clinical trials.

In Phase 3, 68% of trials were sponsored by the biopharmaceutical industry, 15% by academic medical centers/NIH, 11% by public-private partnerships, and 6% by others.

In Phase 2, 41% of trials were sponsored by the biopharmaceutical industry, 36% were sponsored by academic medical centers/NIH, 19% were public-private partnerships, and 3% were funded by others. Table 7 shows the sponsors for each development stage.

Figure 4 summarizes the mechanism of action of disease modifiers in all phases of clinical trials classified by CADRO target.

These include drugs targeting amyloid (20), tau (13), inflammation (23) and synaptic plasticity (19). Of the 17 categories (excluding unknown and other categories), a total of 15 categories are drugs in development. 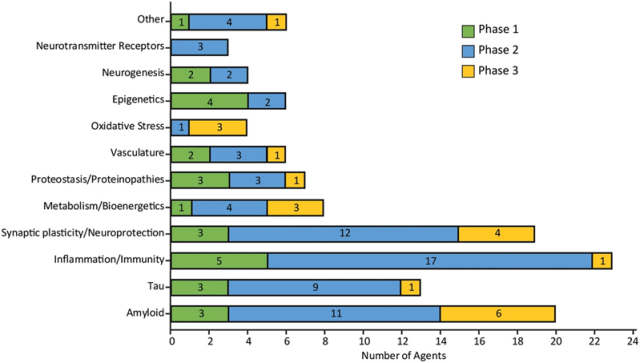 Clinical trials in AD target a robust range of biological processes, including most of those identified in the CADRO classification.

Amyloid therapy has come a long way with the approval of the monoclonal antibody aducanumab. Other approaches targeting amyloid and treatments for tau abnormalities, inflammation, and synaptic dysfunction are well represented in the AD drug development pipeline.

Despite the challenges posed by the current coronavirus pandemic, clinical trials of AD drugs are still ongoing. Biomarkers are increasingly being used to inform clinical trials, including their use in diagnosis and outcomes. New clinical outcome measures, especially composite scales and scores, provide increased sensitivity to treatment response.

Drug development for AD depends on strong alliances with participants and their families as they make huge time sacrifices in trial participation.

Advances in target identification, drug discovery, and clinical trial approaches have increased confidence that more and better treatments will emerge in the AD drug development pipeline.