On March 28, 2022, the Patompon Wongtrakoongate group of Mahidol University in Thailand uploaded a preprinted article on BioRxiv: Broad neutralization of SARS-CoV-2 variants by circular mRNA producing VFLIP-X spike in mice.

Compared with the widely used S-2P Spike antigen, the VFLIP Spike antigen has a glycosylation site closer to the natural Spike and has better stability.

On the basis of antigens based on structural rational design, the construction of chimeric mutant Spike, combined with the circular RNA platform, provides a very good idea for the development of iterative mRNA vaccines.

For antigen design, researchers used Erica Ollmann Saphire ‘s Spike antigen-VFLIP based on structure design . Compared with S-2P/S-6P, VFLIP not only has significantly improved expression and stability, but also has the same glycosylation site as native Spike. VFLIP antigen, modified mutations in the following three aspects on the Spike protein sequence:

(1) Five proline mutations ( V ) were introduced. Compared to SP-6, the lysine of the native Spike protein at position 986 is restored, thereby preserving the salt bridge mediated by K986.

(3) Mutation Y707C and T883C introduced a disulfide bond between the S2 subunit of Spike monomer and the S2′ of another Spike monomer adjacent to it, so as to maintain the native trimer of Spike protein. 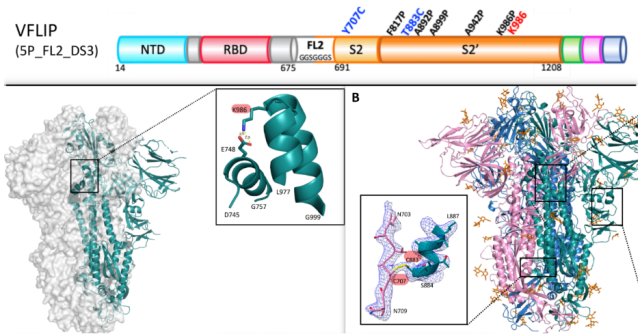 Going back to this article, they used the VFLIP Spike antigen as the backbone, and on the basis of the original Spike sequence of D614G, they simultaneously introduced five mutations from the Beta and Delta RBD regions , namely K417N, L452R, T478K, E484K and N501Y , to form a mosaic . Synthesized mutant Spike antigen , called VFLIP-X .

At the same time, the researchers also constructed the H ex aPro-X Spike antigen , which consists of 6 proline mutations + 5 identical mutations from the Beta and Delta RBD regions, to compare the Spike caused by two different antigen designs. differences in protein expression. 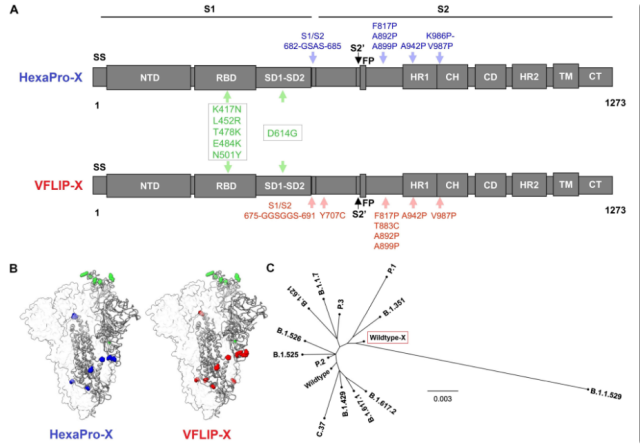 WB and immunofluorescence confirmed that the circRNAs encoding the two Spike antigens could be expressed normally in HEK293T cells.

Differences in serum antibody responses triggered by the two vaccines 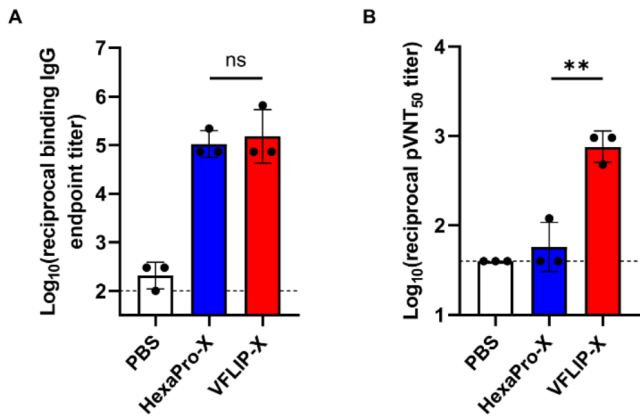 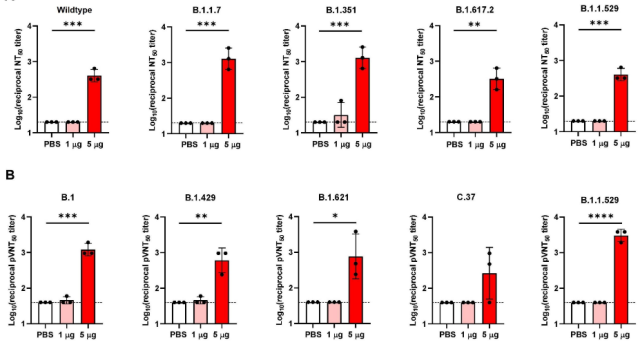 Two doses of CircRNA-VFLIP-X vaccine immunized mice with an interval of 3 weeks, and the titers of anti-Spike-IgG targeting B.1.1.529 and serum neutralizing antibody titers increased with time.

Seventh week after the second dose of CircRNA-VFLIP-X vaccine, spleen cells were isolated, and the spleen cells were stimulated with Omicron – B.1.1.529 – Spike polypeptide library, and the cellular immune response was analyzed by ELISpot. Spleen cells of vaccinated mice secreted high levels of IFN-γ , but very low levels of IL-4 .

ELSIA data showed that 5ug immunization of mice in the high-dose group triggered high levels of IgG2a and IgG1 .

The above data suggest that the CircRNA -VFLIP-X vaccine triggers a TH1-biased cellular immune response . 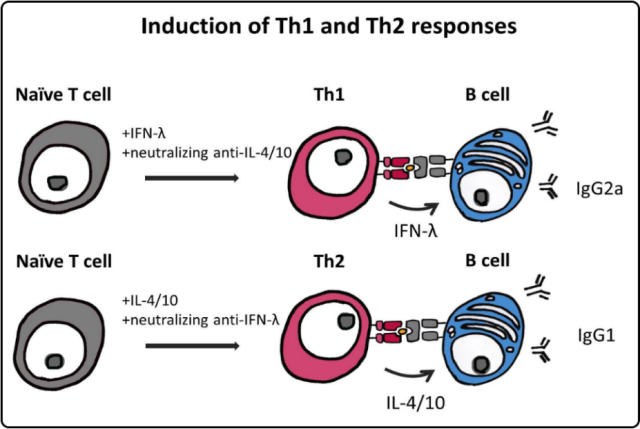 TH1 and TH2 cellular immune responses stimulate B cells to secrete different IgG subtypes, and the ratio of the two types of IgG antibodies characterizes the bias of T cell immune responses.

(1) The VFLIP-X Spike sequence designed in this study, based on the original Spike sequence of D614G, introduced five new coronavirus VOCs mutations in the RBD region, namely K417N, L452R, T478K, E484K and N501Y.

The presence of these mutations in Alpha/Beta/Delta increases the binding affinity of Spike and ACE2, escaping the serum neutralization response triggered by the original strain.

The introduction of these five mutation sites enables the CircRNA -VFLIP-X vaccine to have a very broad-spectrum neutralizing ability in the face of VOCs. 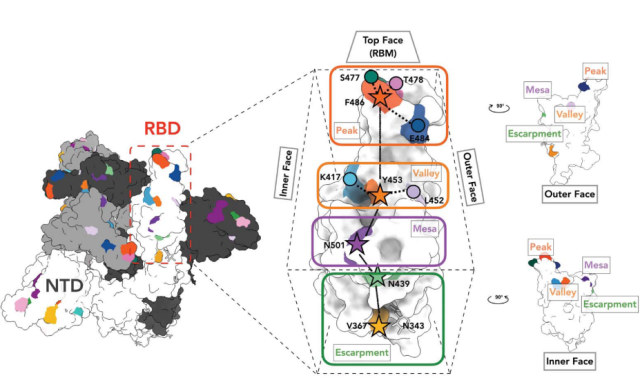 Important mutations in the RBD region in a trimer Spike with the RBD in the ascending conformation.

In 2021, Danilo Casimiro published the article: Immunogenicity and efficacy of mRNA COVID-19 vaccine MRT5500 in preclinical animal models , and found that the mRNA vaccine encoding the Spike antigen of the original HexaPro strain could not trigger serum neutralizing antibodies in the rhesus monkey model .

However, the HexaPro Omicron Spike mRNA vaccine developed by the Wang Yucai team of the University of Science and Technology of China ( the S1/S2 furin cleavage site is not mutated ) and the HexaPro Omicron Spike antigen + GSAS furin cleavage site mutation mRNA vaccine used by Sidi Chen of Yale School of Medicine can trigger the target Antibodies were neutralized to the serum of Omicron-B.1.1.529 . Therefore, the effect of this HexaPro-Spike antigen design on the triggered serum neutralizing antibodies needs to be explored in more future articles.

(3) The prefusion conformation can trigger potent neutralizing antibodies, which has been confirmed. Notably, in the S-2P/Hexa antigen design, the RBD is more open .

However, other articles have shown that Spike antigens with the RBD fully closed , such as VFLIP, elicit stronger neutralizing antibody responses than S-2P/Hexa antigens .

Furthermore, VFLIP is more similar to native Spike in the distribution of glycosylation sites than Hexa antigen .

Therefore, in the design of Spike antigen, how to balance the open conformation and closed conformation of RBD, and the relationship between the stable state and unstable state before fusion is a difficult problem that needs to be overcome.