The mice in the high-dose groups of the three vaccines had very good preventive and protective effects against the tested VOCs in the lungs. However, in the low-dose group immunized mice, serum neutralizing antibody titers decreased by orders of magnitude, and breakthrough infections occurred in the lungs.

This suggests that individuals vaccinated with the three vaccines may develop breakthrough infections when faced with certain VOCs variants, such as Delta.

Next, let’s take a detailed look at the immunogenicity and preventive effect of these three vaccines in mouse models.

In 129S2 mice, 2 doses of the three vaccines and the control group ( invariant coding antigen ) were respectively inoculated, and serum was collected 3 weeks after the second injection. 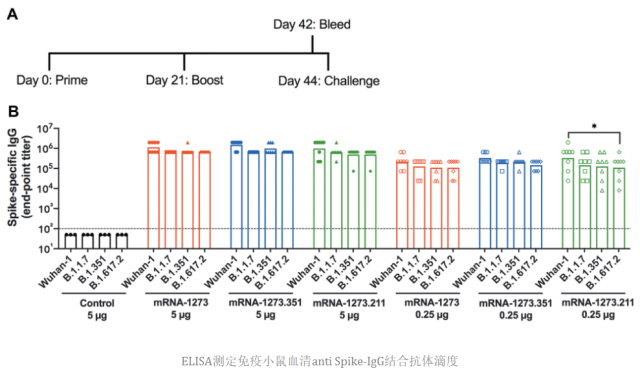 Neutralizing antibody titers in sera of 129S2 mice vaccinated with the three vaccines were determined by FRNT (live virus):

(1) Compared with the unvaccinated mouse group , the high-dose vaccination group can strongly trigger serum neutralizing antibody responses targeting test VOCs. and antibody titers are basically similar ( except that between individual vaccines, there is a 4-2-fold difference in serum antibody titers targeting the same VOC ).

It is worth noting that the Delta-targeted serum neutralizing antibody titers triggered by the three vaccines were significantly lower than those targeting other VOCs ( 4-5 times ).

(2) For the low-dose vaccination group, compared with the high-dose group, the serum neutralizing antibody titers of the three vaccine-triggered targeted test VOCs were reduced by almost an order of magnitude . At the same time, the three vaccines targeted the same VOC.

There are obvious differences in the serum neutralizing antibody titers of the VOCs , and it can also be seen that the antigen mixed bivalent vaccine ( mRNA-1273.211 ) targets VOCs The serum neutralizing antibody titer is always the same as that of one of its components, the monovalent antigen vaccine ( mRNA -1273.211). -1273/mRNA-1273.351 ) close.

(2) B.1.617.2 has the most distant epitope , which is consistent with the lower neutralizing antibody titers targeting this VOC variant triggered by the three vaccines .

After immunizing 129S2 mice for 3 weeks, the researchers conducted a challenge to determine the immune protection effect of the vaccine:

(1) Compared with the unvaccinated group, the body weight of mice in both high-dose and low-dose groups did not decrease within 4 days after challenge.

(2) After 4 days of challenge, the viral loads in the nasal cavity, lung and spleen of the mice were detected . The virus replication in the nasal cavity of the high-dose group was significantly inhibited, while the virus was basically undetectable in the lungs.

(3) For the low-dose group, compared with the unvaccinated group, the virus replication in the nasal cavity was also significantly inhibited, but a higher viral load of the Beta strain was detected in the lungs of the mice inoculated with mRNA-1273 and mRNA-1273.211. amount, even exceeding the viral load in the nasal cavity. 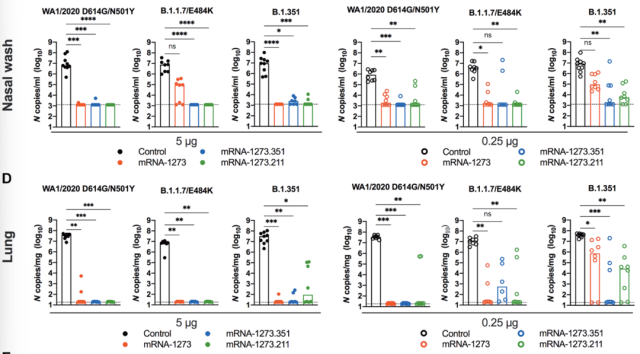 The researchers also performed challenge experiments in K18-hACE2 mice, which are more susceptible to VOCs because they express the ACE2 receptor. In K18-hACE2 mice, the challenge VOCs in the nasal cavity of the high-dose group were significantly inhibited, and the replication of challenge VOCs was basically undetectable in the lungs. In general It is worth noting that a higher load of the Delta variant was detected in the lungs of mice vaccinated with low doses of the two vaccines , while the lungs of mice vaccinated with a low dose of mRNA-1273 also lost the immune protection effect against the Beta strain . , a higher beta strain load was detected.

K18-hACE2 mice were challenged, and nasal and lung viral loads were measured

Through this article, we can see that the lungs of mice inoculated with high doses of mRNA1273 and mRNA-1273.351 have very good immune protection effects against wild strains, Alpha, Beta, and Delta. After the challenge test, the lungs were basically detected. No viral replication.

Since the recent epidemic strain of COVID-19 infection is Omicron, coupled with the unique properties of its Spike antigen , when designing a multivalent mRNA vaccine, Spike + , which can trigger relatively broad-spectrum serum neutralizing antibodies, obviously triggers strain-specific serum antibodies. Spike , may be a better choice .