On April 21, 2022 , CureVac/GSK announced the preclinical data of the co-developed bivalent mRNA COVID-19 vaccine , and uploaded the preprint on BioRxiv : Low-dose bivalent mRNA vaccine is highly effective against different SARS-CoV-2 variants in a transgenic mouse model , this low-dose ( 5ug ), bivalent mRNA COVID-19 vaccine without modified nucleotides has a good protective effect in preclinical mouse and rat models, this vaccine contains half of Spike-Beta mRNA and half the Spike-Delta mRNA.

A few days ago, Moderna announced the clinical phase 2/3 data of the bivalent vaccine mRNA-1273.211. The doses are 50ug and 100ug, containing half of Spike-WT mRNA and half of Spike-Beta mRNA. mRNA-1273.211 triggers the targeting of Omicron mutants.

Neutralizing antibody titers were only 2-fold higher than mRNA-1273 and did not seem to see a very significant advantage of the bivalent vaccine. Today, let’s take a look at the specific mouse model data of the CureVac bivalent COVID-19 mRNA vaccine.

The biggest feature of CureVac-mRNA vaccine is that it does not use chemically modified nucleotides, and the full-length Spike encoded by the CDS sequence comes from CV2CoV.351 ( Beta ), CV2CoV.617 ( Delta ), and CV2CoV ( original strain ).

The 0.5 ug bivalent vaccine includes 0.25 ug Spike-Beta and 0.25 ug Spike-Delta . LNP was licensed from Acuitas Therapeutics . The specific cap structure, UTR sequence, has not been published in the article.

Serum was collected on day 0 ( Prime ) and day 28 ( Boost ), day 56, respectively . On day 56, for groups of vaccinated mice, 4 mice per group were sacrificed prior to challenge for analysis of cellular immune responses in lung and spleen. The remaining mice were used for B.1.351 or B.1.617.2 challenge . 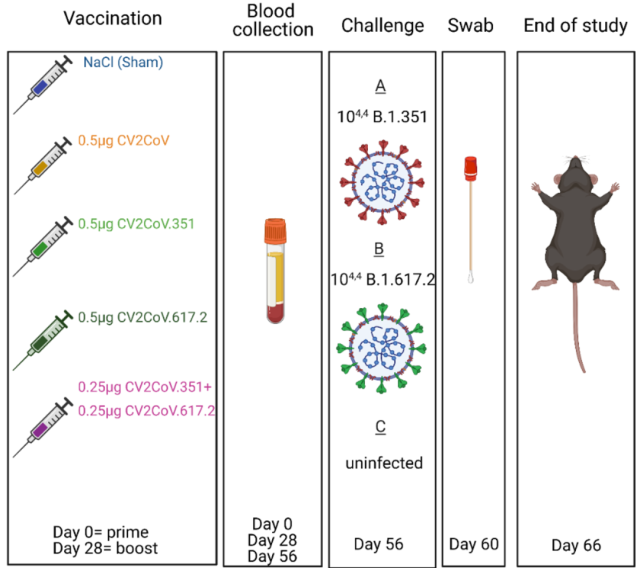 All vaccinated mice did not experience death caused by the new coronavirus after challenge, nor did they experience significant weight loss . 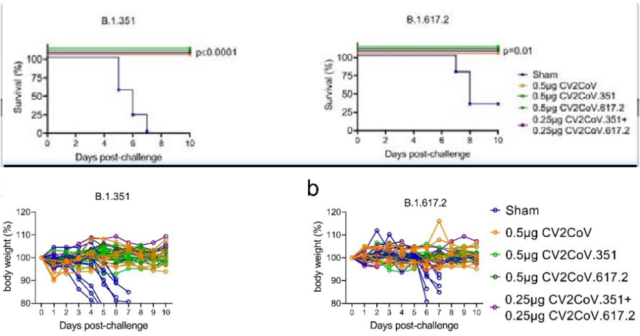 In the group of mice vaccinated with monovalent vaccine, the degree of inhibition in the inferior turbinate ( conchae ) of SARS-CoV-2 varied by strain, but all showed inhibition of viral replication compared to the unvaccinated group.

Replication of the Delta strain was completely inhibited in the inferior turbinate of all vaccinated groups of mice , with no detectable viral subgenomic RNA .

From the above data, it can be found that the replication ability of new coronavirus variants in the inferior turbinate is different, but it is generally more difficult to suppress and clear than the lungs.

Even in the case of specific vaccines, it is still impossible to completely clear some new coronaviruses in the inferior turbinate. Replication of mutant strains.

Serum RBD-binding antibody titers were generally high in all vaccinated mouse groups and did not differ significantly from each other , nor did they decay before and after challenge.

Before and after the challenge, the serum neutralizing antibody titers triggered by the bivalent vaccine group were significantly higher than those triggered by the original strain vaccine , and were not related to the type of infection variant .

The above data show that the bivalent vaccine has a more efficient broad-spectrum neutralization ability in response to different mutant strains than the serum neutralizing antibodies triggered by the original strain vaccine or the monovalent vaccine .

To further characterize the T cell response, a higher proportion of TRM cells ( resident memory T cells ) were identified in the lung by surface markers of lung resident T cells .

It was also found that mRNA vaccination can also induce the production of CD8 + T cells in the lungs that secrete large amounts of IFNγ and granzymes. 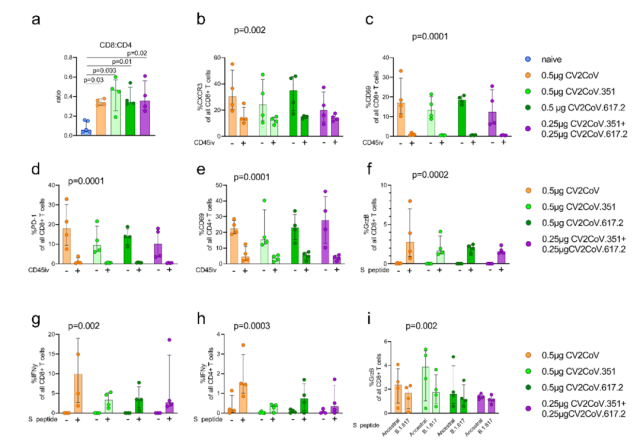 Both the vaccinated mice triggered strong CD4 + and CD8 + responses, and a large number of TRM cells were present in the lungs

To summarize the clinical data obtained in the mouse model of the CureVac-mRNA vaccine:

2. The replication ability of the new coronavirus variant in the upper respiratory tract is different, and the new coronavirus is generally more difficult to clear in the inferior turbinate than in the lungs . Beta/Delta variant replication was undetectable in the oral cavity, lung, brain and cerebellum of all vaccinated mice after challenge.

4. The serum neutralizing antibody titers of the Omicron-targeting strain triggered by the inoculation of Spike-Delta mRNA vaccine were 3 times lower than that of the Delta-targeting isotype .

From the above data, it can be seen that the CureVac COVID-19 bivalent vaccine has an advantage over the monovalent vaccine when dealing with different variants.

This shows that in the optimization and upgrading of vaccines, the use of bivalent or multivalent vaccines can trigger heterologous protection effects and improve the broad-spectrum neutralization ability of serum neutralizing antibodies against different mutant strains .

Considering the flexibility of encapsulating mRNA during the preparation of mRNA vaccines, this makes mRNA vaccines have significant advantages in R&D and production when dealing with current different new coronavirus variants.