On May 21, AbbVie announced that it has submitted a New Drug Application (NDA) to the U.S. FDA for its investigational therapy ABBV-951 (foslevodopa/foscarbidopa) for the treatment of motor symptoms in patients with advanced Parkinson’s disease.

If approved, ABBV-951 will provide patients with the first treatment modality for sustained subcutaneous delivery of a levodopa/carbidopa prodrug, the press release states.

Parkinson’s disease is a progressive neurodegenerative disease caused by the gradual loss of brain cells that produce the neurotransmitter dopamine.

A drop in dopamine in the brain results in a wide range of motor and non-motor symptoms.

Since the 1970s, the main treatment for patients has been levodopa. Over time, however, levodopa can cause involuntary, uncontrolled movements called dyskinesia.

In advanced patients, oral levodopa faces multiple challenges, such as the decline of the patient’s gastrointestinal tract, which prevents the drug from entering the body in a timely manner, and the inability of the oral drug to maintain the drug concentration in the patient’s body at a stable level, which also causes the patient to exercise. increased obstacles.

ABBV-951 is a prodrug of levodopa and carbidopa. They are highly water-soluble and can be administered by continuous subcutaneous infusion via a pump attached to the skin, thereby stably maintaining drug concentrations in the body. 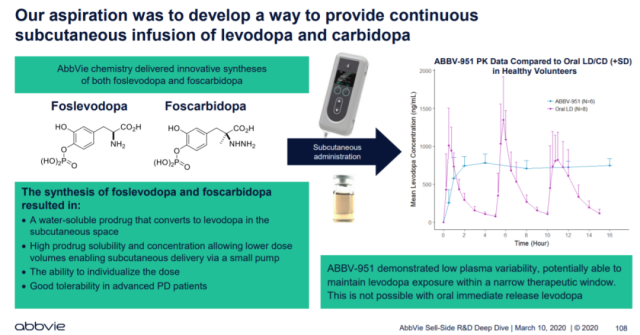 This NDA is primarily based on the results of the randomized, double-blind, active-controlled Phase 3 clinical trial M15-736. Trial results showed that ABBV-951 was more effective than oral immediate-release levodopa/carbidopa in controlling motor fluctuations in patients with advanced Parkinson’s disease.

[1] AbbVie Submits New Drug Application to US FDA for Investigational ABBV-951 (Foscarbidopa/Foslevodopa) for the Treatment of Advanced Parkinson’s Disease. Retrieved May 20, 2022, from https://news.abbvie.com/news/press- releases/abbvie-submits-new-drug-application-to-us-fda-for-investigational-abbv-951-foscarbidopafoslevodopa-for-treatment-advanced-parkinsons-disease.htm