On May 25, the British government introduced a bill to parliament  that would pave the way for gene-edited plants and animals to be grown and raised for food in England.

The proposed new legislation would ease rules on gene editing rather than genetically modified products, although it would initially only apply to plants.

The technology is currently not being used due to EU rules. But Brexit gives Britain the ability to make its own rules.

Gene editing involves turning genes on and off in an organism by snipping out small stretches of DNA. It can produce varieties that can also be produced by traditional crossing methods, but much faster.

And critics such as Liz O’Neill – who is the director of GM Freeze – say the new regulations remove much-needed scrutiny. “What’s been removed is the need for independent risk assessments and the need for transparency.”

Many biotech and agricultural researchers have lobbied the government to go further and thereby legislate for the commercial use of GM crops, but ministers have decided to take a more cautious approach.

Scientific studies have shown that both techniques are safe, and GM crops have been grown outside the EU for 25 years. 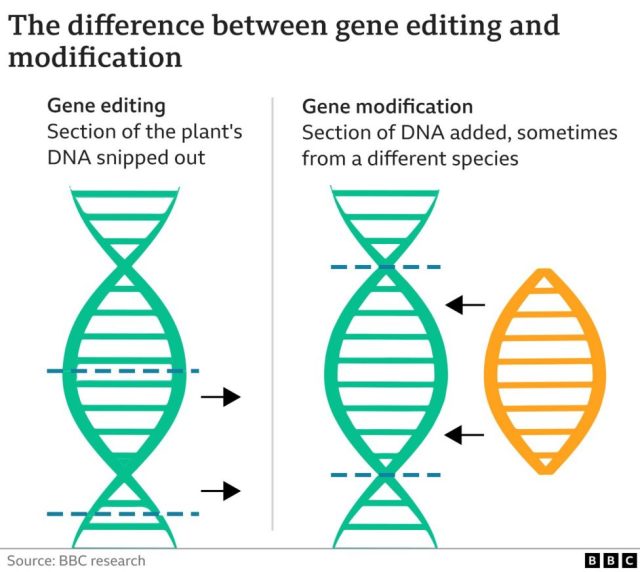 The UK government believes that gene editing will make crops more resistant to pests and diseases and more resilient to the effects of climate change.

Its purpose is to increase productivity and increase food security.

The UK has some of the best genetic technology researchers, and the government hopes the loosening of the law will lead to new food and new businesses.

The Department for Environment, Food and Rural Affairs (Defra) conducted a public consultation on the issue shortly after the UK leaves the EU in 2020.

But Defra’s own polling on the issue shows that public support for the technology isn’t overwhelming: 57 percent say the use of GM crops is acceptable, while 32 percent say it’s unacceptable.

Support for some environmentally friendly applications such as reducing the use of pesticides and herbicides rose to 70 percent.

Support for the use of gene editing in animals is lower because of the pain the technology can cause.

Gene editing can be used to produce disease-resistant livestock, which benefits both animals and farmers.

But there are also concerns that the technology could be used to increase farm productivity at the expense of animal welfare.

It is for this reason that the bill will not immediately allow gene editing of animals, though it will give ministers the power to introduce the technology when they are satisfied that regulation is sufficient to ensure that livestock do not suffer.

The rules governing gene-edited plant research were relaxed last month as they did not require parliament to pass new laws.

Professor Johnathan Napier planted the first batch of gene-edited seeds approved by the new procedure last week on the Rothamsted Research Company’s experimental field. “Ultimately, society will benefit from new discoveries of better crops and more nutritious food,” he said. “All of these things have been promised, but making it easier to get into the fields will mean we’ll see those promises. more fulfillment.”

“The bill eschews head-on with the transformation our food and farming systems need to achieve true security and resilience. We see the government prioritising We are deeply disappointed by unpopular technologies, rather than focusing on the real problems – unhealthy diets, lack of crop diversity, overcrowding of farm animals and a dramatic decline in beneficial insects that can eat pests.”

Lewis points out that history has shown that genetic modification, the predecessor of gene editing, has only benefited a few large corporations, with the proliferation of controlled crop patents and undesired, lucrative traits.

David Exwood, vice-chairman of the National Farmers’ Union, welcomed the change. “This science-based legislative change has the potential to provide some benefits for food production and the environment in the UK, and will provide farmers and growers with another tool in their toolbox as we look to overcome the challenges of feeding a growing population and address the climate crisis at the same time.”