With the successful development of the mRNA COVID-19 vaccine and the approval of a variety of new RNA-based drugs, RNA has jumped to the forefront of drug research.

In addition to the role of mRNA in the production of antigens or therapeutic proteins, different types of RNA have multiple functions and play important regulatory roles in cells and tissues.

These RNAs have potential as new therapeutics, and the RNAs themselves can be used as both drugs and targets .

Recently, a review article published in the Journal of Medicinal Chemistry assessed the advantages and challenges of different types of RNA in medical applications based on the analysis of the CAS Content Collection .

It also provides an overview of the development pipeline of RNA therapeutics and vaccines, RNA chemical modifications and delivery mechanisms.

Types of RNAs and their Medical Applications

RNA is a multifunctional biological macromolecule, which can be broadly defined as coding RNA and non-coding RNA (ncRNA) .

mRNA can be used as a therapy, diagnostic biomarker or therapeutic target. mRNA in cells can be translated to produce therapeutic proteins to replace defective or missing proteins. 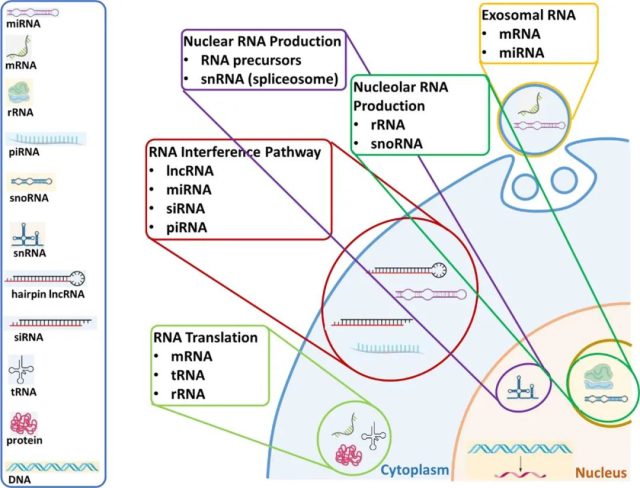 Many different types of RNA

siRNA leads to the degradation of mRNA by binding to specific sequences in the coding region of mRNA.

This targeting specificity increases its potential as a drug. ASOs recognize and bind complementary DNA or RNA sequences, which can promote normal mRNA splicing, prevent the expression of dysfunctional proteins, or target RNA for degradation.

Furthermore, aptamers are oligonucleotide sequences that constitute a specific three-dimensional structure. Aptamers can bind a wide range of targets, including proteins, cells, microorganisms, compounds and other nucleic acids.

Its binding to proteins can inhibit the interaction between proteins, resulting in a therapeutic effect.

Advantages and Challenges of RNA Therapies

RNA therapeutics have several important advantages, including high target specificity, modular development by substituting RNA sequences, predictability in terms of pharmacokinetics and pharmacodynamics , and relative safety (among them). most do not alter the genome) .

However, the therapy also presents some challenges: although RNA therapeutics can be designed using a “plug and play” modular design concept, they still need to be tested to determine their efficacy and safety; since RNA is easily degraded, how can Achieving cell delivery faces significant challenges.

Looking back at previous research on RNA, many key clinical discoveries have driven the continuous innovation and development of RNA therapeutics.

Since the early research on nucleic acid and the discovery of mRNA in 1960, it has taken about 60 years for humans to finally apply it to the clinic through the transformation of mRNA – the development of a COVID-19 mRNA vaccine.

At present, 2 COVID-19 mRNA vaccines have been approved by the US FDA for marketing.

As far as siRNA is concerned, in 2006, Dr. Andrew Fire and Dr. Craig Mello won the Nobel Prize in Medicine or Physiology for discovering the mechanism of RNA interference .

A pivotal human clinical trial in 2010 demonstrated that siRNA could target specific human genes, and subsequent preclinical research and development led to the approval of the first siRNA therapy, Onpattro (patisiran), in 2018 for the treatment of patients with genetic Adult patients with peripheral nerve disease due to transthyretin amyloidosis (hATTR) .

The concept of using antisense oligonucleotides (ASO) as a therapy was proposed in 1978, and the first ASO drug Vitravene (fomivirsen) was approved by the US FDA 20 years later.

Today, a number of ASO drugs have been approved by the US FDA.

Currently, a number of RNA therapeutics under investigation are in various stages of preclinical and clinical development, treating a variety of diseases including cancer, liver and kidney disease, heart disease, metabolic disease, blood disease, respiratory disease and autoimmune disease. 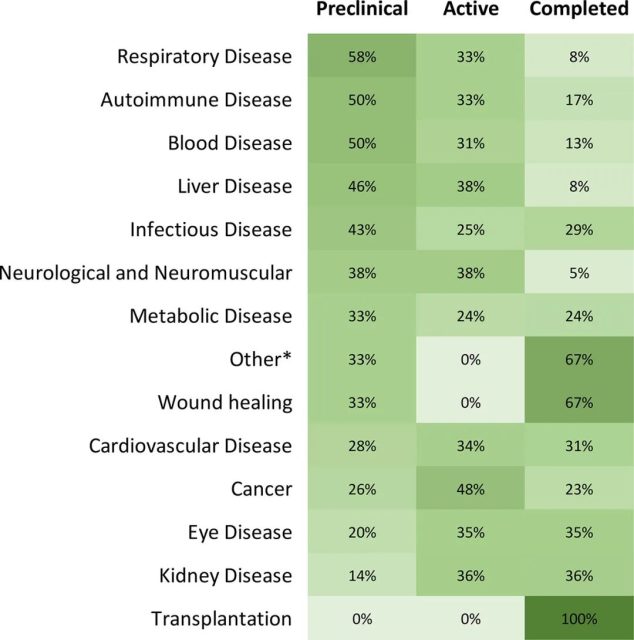 Distribution of pipelines under development for different diseases

Compared to other biomolecules, RNA molecules are unstable. After exogenous RNA molecules are introduced into the human body, the protein expression level in cells is limited, which often triggers an immune response in the body.

These problems can be alleviated by various optimizations of RNA molecules, including chemical modifications, etc.

The choice of backbone determines whether the ASO blocks cellular processes such as translation, transcription, or splicing, or targets RNA for nuclease digestion.

Modification of the ribose sugar in siRNA can alleviate off-target effects by reducing the thermal stability of the siRNA, thereby enhancing specific binding to the target. 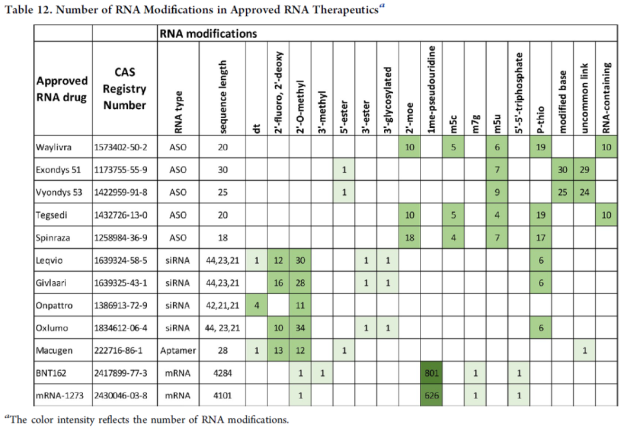 While biological barriers such as immunogenicity and nucleases can often be addressed by chemical modification of RNA, encapsulation of RNA into nanocarriers can both protect RNA and deliver it into cells. Nanomaterials with biodegradability, biocompatibility, and low toxicity can also be used as RNA carriers. 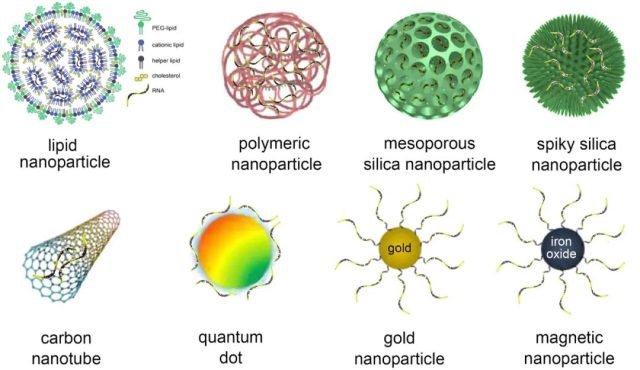 Lipid nanoparticles (LNPs) are currently one of the most widely used non-viral delivery systems for nucleic acid drugs and vaccines .

Recently, lipid nanoparticles have attracted global attention as an important component of mRNA Covid-19 vaccines and play a key role in the effective protection and transport of mRNA into cells.

Polymers are the second largest class of nucleic acid delivery vehicles after lipids .

Linear cationic polymers are also one of the most widely studied carriers. In addition, polypeptides are structurally and functionally diverse, biocompatible, and can be used to target cells. 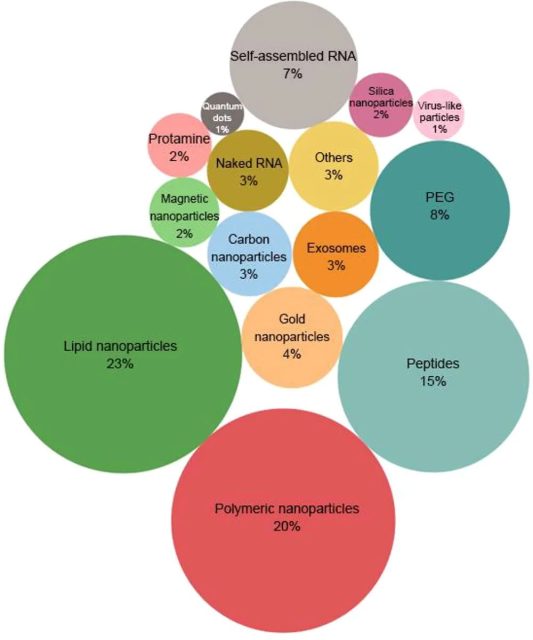 In summary, RNA drugs have been approved for the treatment of cardiovascular, metabolic, liver, infectious, neurological, neuromuscular, renal and ocular diseases, with many more in the research stage. RNA carriers are of great interest in overcoming the challenges faced by targeted RNA drug delivery.

According to the authors, as our understanding of the many types and functions of RNAs improves, the ability to generate modified RNAs with greater stability and drug activity improves, and nanotechnology-based carriers enable targeted delivery of these RNAs into cells , the explosive growth of targeted RNA therapeutic options with multiple specificities has the potential to revolutionize the treatment of human disease.