3DBio Therapeutics, a regenerative medicine implant technology company, announced in a press that doctors have successfully transplanted a 3D-printed ear made from human cells into a woman born with a rare ear deformity.

The transplant is part of the technology’s first clinical trial, and its success marks a major step forward in tissue engineering.

“If all goes according to plan, this will revolutionize the way organs are transplanted,” Arturo Bonilla, an ear reconstructive surgeon who led the team performing the operation, told The New York Times.

About 1,500 babies are born in the United States each year with microtia, a condition in which one or both ears are underdeveloped or completely absent.

3DBio Therapeutics is conducting a clinical trial with 11 participants testing its AuriNovo ear, a personalized tissue implant to replace the missing ear in these patients.

Typically, people with microtia have ears made of rib grafts or synthetic materials.

Instead, the experimental procedure involved taking living tissue from a patient’s existing ear to remove cartilage cells. These cells were then grown and 3D printed in the shape of a patient’s ear.

Ears continually regenerate cartilage throughout a patient’s lifetime, and because it’s made from their own cells, rejection is unlikely, the company told The New York Times.

2022 is an important year for the advancement of organ transplantation technology. In January, doctors performed a pig heart transplant on a patient who died a few months later.

3DBio Therapeutics executives said that in the future, the technology they developed could potentially print other body parts, such as the nose and rotator cuff, and eventually complex organs such as livers and kidneys. 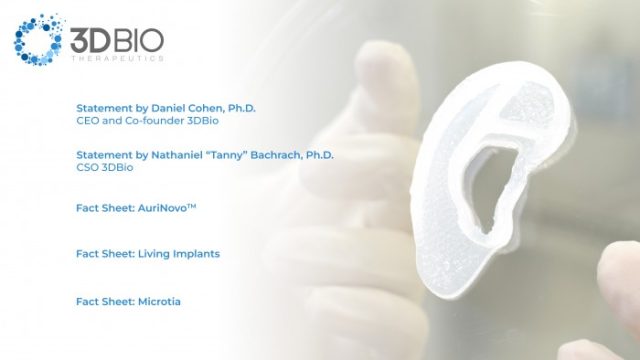 “The ear is significantly simpler than an internal organ and, unlike the liver, is not necessary to sustain a person’s life, so it will be a long road toward this potential future.” Carnegie Mellon University Biomedical Engineering and Adam Feinberg, a professor of materials science and engineering, told The New York Times: “But if you have ears, it’s more realistic.”