For the first time in the history of cancer treatment! No radiotherapy and chemotherapy, no surgery, only drugs to achieve clinical cure of solid tumors

Without chemoradiation, without surgery, these patients are completely tumor free and do not need any further treatment.

All patients achieved clinical complete remission after dostarlimab treatment with no recurrence during a median follow-up period of 1 year.

To be precise, these patients all achieved clinical complete remission (cCR), that is, the amazing effect of cCR rate reaching 100%, allowing patients to avoid subsequent traditional concurrent chemoradiotherapy and surgery.

Not only was there no evidence of tumor on magnetic resonance imaging, 18F-fluorodeoxyglucose-positron emission tomography, endoscopy, digital rectal examination, or biopsy; and no progression or recurrence was reported during follow-up (range, 6 to 25 months) case.

The results of the study were simultaneously published online in the New England Journal of Medicine (12 patients were enrolled at the time of submission of the paper).

NEJM’s accompanying commentary pointed out that although clinical complete remission does not perfectly represent long-term control of the cancer, researchers may have “the beginnings of therapeutic changes” in rectal cancer. 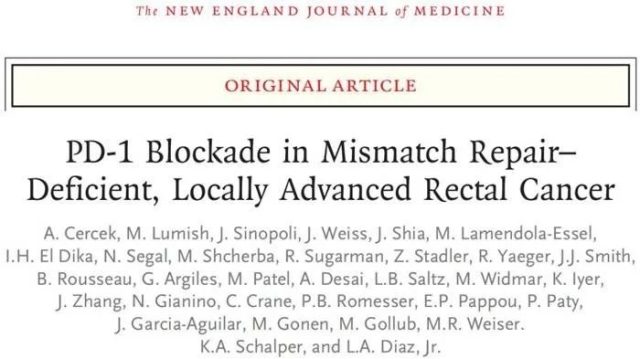 Surgical resection of the rectum after neoadjuvant chemotherapy and radiotherapy is the standard treatment for locally advanced rectal cancer.

Mismatch repair deficiency (dMMR) is a subgroup of rectal cancer, estimated to account for approximately 5%-10% of all rectal cancer patients. Since there is no specific treatment in the past, this special screening is not routinely performed before surgery.

In humans, germline mutations in MMR genes, most commonly MSH2, MLH1, MSH6 and PMS2, have been identified as genetic factors in Lynch syndrome.

Microsatellite instability (MSI-H) is its hallmark phenotype characterized by alterations in tandem nucleotide repeat length throughout the genome. 】

The local recurrence rate of LARC patients and the 3-year disease-free survival rate can reach 77%.

But this treatment is torturous and can lead to numerous long-term sequelae, including neuropathy, infertility, and bowel and sexual dysfunction.

Among them, patients with dMMR rectal cancer cannot be repaired because of microsatellite instability, and the chemotherapy effect is not ideal.

The goal of treatment for long-term patient survival.

The results of this study are likely to change the current clinical diagnosis and treatment mode of rectal cancer patients.

For example, dMMR may be added before treatment in the future.

dMMR rectal cancer patients can directly use immunotherapy without radiotherapy, chemotherapy, or even surgery, and the quality of life will be greatly improved.

Although the proportion of dMMR in all rectal cancers is not high, a large number of patients are also involved in the total population base.

Of course, although the number of cases in this study is relatively small, the follow-up time is not long enough, and its real efficacy needs further follow-up and research, but the results of this study still bring new hope and vision to the majority of oncology practitioners. For example, are the findings of this study also applicable to other cancers such as colon, gastric, and prostate cancers in dMMR?

The results are undoubtedly worth looking forward to.

The first discovery of dostarlimab (dotalimab) was an American biopharmaceutical company called AnaptysBio; in 2014, oncology drug research and development company TESARO obtained the global development and commercialization rights of the drug; in 2018, it returned to oncology drugs The multinational pharmaceutical giant GlaxoSmithKline (GSK) announced that it has acquired TESARO for $5.1 billion, and also has this drug in its pocket. 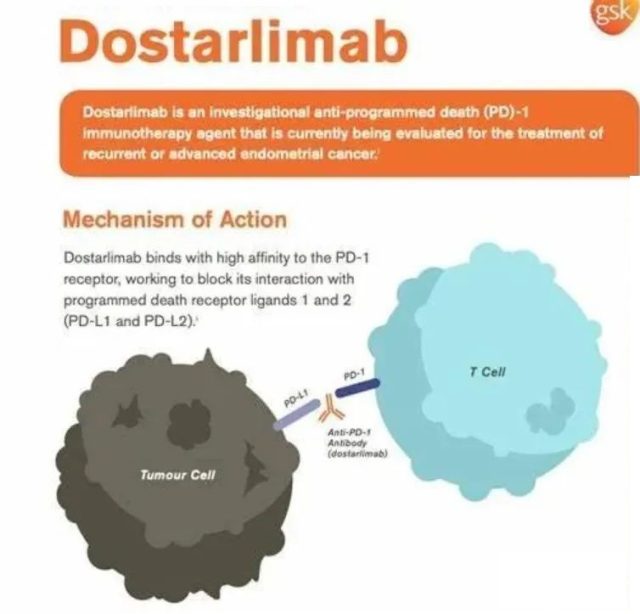 On August 17, 2021, GSK announced that its PD-1 monoclonal antibody dostarlimab has been approved by the FDA for the last-line treatment of adult patients with advanced solid tumors with recurrent mismatch repair deficiency (dMMR).

According to the British “Times” reported , the cost of the drug is about 11,000 US dollars  per dose. It is given to patients every 3 weeks for 6 month.