On June 26, 2021,  “New England Journal of Medicine” (NEJM) published an article titled “CRISPR-Cas9 In Vivo Gene Editing for Transthyretin Amyloidosis” , which is the first in vivo CRISPR gene editing therapy.

The results of clinical trials have greatly expanded the application scope of CRISPR gene editing therapy.

Direct injection of CRISPR components can perform efficient gene editing in the body, opening up new avenues for the treatment of many genetic diseases, and is known as “opening a new era of medicine”.

The research was carried out by teams including the National Amyloidosis Centre, University of London, St George’s University London, the Royal Free College, the University of Auckland and New Zealand Clinical Research, and was co-sponsored by Intellia Therapeutics and Regeneron. 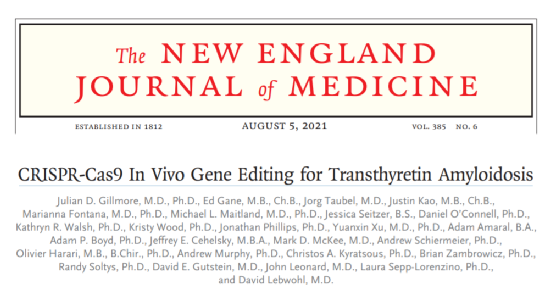 CRISPR-Cas9 was first discovered in bacteria and archaea.

It is an adaptive immune defense mechanism formed during the long-term evolution of bacteria to fight against invading viruses and foreign DNA.

Through the Cas9 enzyme to discover, cut and replace specific sequences of DNA, CRISPR-Cas9 gene editing can make permanent and precise changes to the patient’s chromosomes, and repair potential genetic mutations, cure any disease with genetic origin, so it is also known as A “game changer” in biology.

Main results of this study

Hereditary transthyretin amyloidosis (hATTR) is a rare autosomal dominant disorder caused by mutations in the transthyretin (TTR) gene that misfold the protein product to form amyloid fibrils that accumulate in tissues.

Serious complications in various tissues such as the heart and nervous system.

This study selected hATTR patients as subjects for the following three reasons. First, hATTR is a single-gene genetic disease. Second, knocking out TTR had limited physiological effects on subjects.

Third, almost all of the circulating TTR in vivo comes from the liver (>99%), and lipid nanotargeting systems targeting the liver have been successfully developed.

The NTLA-2001 therapy used in this study is based on CRISPR-Cas9 technology and consists of a hepatocyte-targeted lipid nanoparticle (LNP) delivery system.

NTLA-2001 can specifically silence the TTR gene in hepatocytes, reduce the expression of wild-type and mutant TTR proteins after a single administration, and has the potential to cure ATTR. 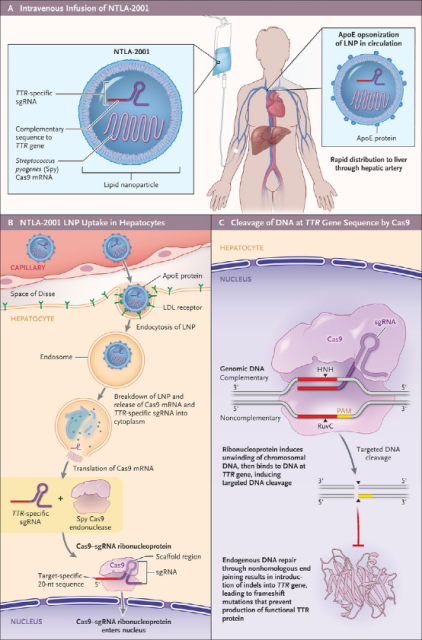 Mechanism of action of NTLA-2001

The researchers first conducted in vitro experiments in human primary stem cells and confirmed that NTLA-2001 could reduce TTR mRNA expression by ≥91% and TTR protein production by ≥95% . 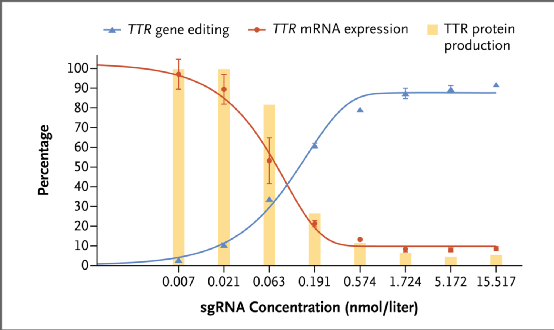 In vitro evaluation of NTLA-2001 potency

Preclinical studies in mice and cynomolgus monkeys showed that a single administration of NTLA-2001 or its alternative Cyn-LNP resulted in durable TTR editing and near-complete elimination of serum TTR protein expression with no adverse effects.

Based on these safety data, the level of no observed adverse effects in humans was extrapolated to be 0.1 mg/kg. 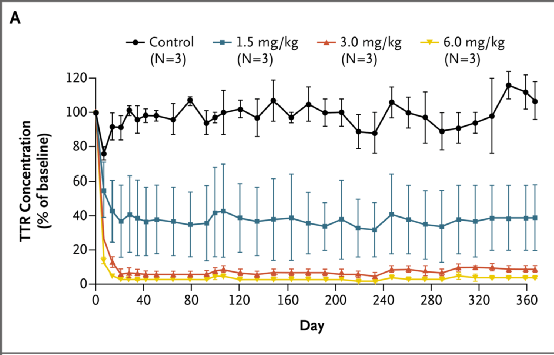 The researchers used the serum TTR concentration level as an indicator to judge the efficacy of NTLA-2001.

The results showed that in general, NTLA-2001 could reduce the serum TTR of patients in a dose-dependent manner, and the TTR concentration in the high-dose group decreased more significantly.

In contrast, standard therapy for patients with ATTR polyneuropathy typically reduces TTR by about 80%, but patients require long-term treatment. In addition, the effects of NTLA-2001 observed in patients in each dose group were reproducible.

This is a two-part, global, phase 1, open-label, multicenter study, and the results presented here are data from the first two dose groups in part 1 of the trial, which is still ongoing.

Excitingly, the CRISPR-Cas9 approach for NTLA-2001 has been modularized and can be used to treat other diseases by simply replacing the sgRNA.

At present, product development using CRISPR gene editing technology as a gene therapy method covers the fields of blood diseases, solid tumors, rare diseases and regenerative medicine, which is worth looking forward to.

The in vitro gene editing process takes place outside the body.

After gene editing is performed on cells taken from a patient, it is reinfused into the patient.

The basic idea is similar to CAR-T therapy for tumor immunotherapy.

At present, this kind of research has made important progress in hematological diseases, and tried to be applied to the treatment of solid tumors.

In August 2016, the team of Professor Lu You from West China Hospital of Sichuan University conducted the world’s first trial of using CRISPR to treat lung cancer in humans.

In April 2019, researchers from the Dana-Farber/Boston Children’s Hospital Joint Center for Cancer and Blood Disorders and the University of Massachusetts Medical School published a paper in Nature Medicine applying CRISPR-Cas9 gene editing to sickle cell anemia and beta- The blood stem cells of thalassemia patients can be edited more efficiently.

The gene editing company CRISPR Therapeutics also released the results of a clinical trial for patients with transfusion-dependent β-thalassemia in December of the following year.

The treatment effect of the enrolled patients was safe and effective within three years, and the success rate was close to 100%.

In vivo gene editing is to use a vector to directly deliver CRISPR/Cas to the target site, and directly modify the diseased gene in the human body.

This study is the world’s first clinical data supporting the safety and efficacy of CRISPR gene editing in vivo. The results show that a single intravenous injection of CRISPR can precisely edit target cells in the body and treat genetic diseases, which is a milestone.

For in vitro gene editing, researchers can identify off-target cells and normal cells to avoid invalid or erroneous editing, and the safety is higher, so the in vitro clinical trials are progressing faster accordingly.

However, in vivo gene editing directly targets tissues and organs, and when used to treat human diseases, the problem of “off-target effects” must be addressed, that is, if the CRISPR system edits DNA sequences other than the target gene in vivo, it may introduce genetic variation , bringing potential unknown risks.

Although the experimental results published this time show that the researchers used primary human hepatocytes to evaluate the therapeutic dose of NTLA-2001 did not produce “off-target effects”, our understanding of the safety risks and related mechanisms of this technology is still very limited.