However, in some cases it can develop into an opportunistic pathogen causing food poisoning or skin and blood infections.

Scientists have been searching for an effective vaccine for more than a century, including at least 15 successful preclinical studies using animal models over the past 30 years.

However, all of these vaccine candidates failed subsequent human trials.

“This is a long-standing problem and one of the most mysterious in the field of Staphylococcus aureus,” said Dr. George Liu, professor of pediatrics at the UCSD School of Medicine and chief of the Division of Infectious Diseases at Reddy Children’s Hospital in San Diego. Without success, scientists have been trying to find a reason.”

MRSA has spread and is a major source of infections acquired within hospitals and other health care settings, such as nursing homes.

In fact, a study published in 2022 estimated that bacterial antimicrobial resistance caused tens of millions of infections and 1.2 million deaths worldwide in 2019, with MRSA being the main driver.

“Vaccines are the most effective way to reduce this health burden and reduce antibiotic resistance,” George said, noting the success of childhood vaccinations and the recent COVID-19 vaccine.

In a new paper published July 7, 2022 in the journal Cell-Host & Microbe , senior author George and his colleagues say they may have found the answer to the Staphylococcus aureusylococcus aureus conundrum, including explaining why vaccines Experiments have so far failed mechanisms and ways to overcome this problem.

Fundamentally, the difference lies in prior exposure to the pathogen, the authors wrote.

The laboratory mice used in the study were designed (bred/raised/maintained) without a specific target pathogen; they had little or no exposure to S. aureus prior to vaccination.

In contrast, humans are exposed to Staphylococcus aureusylococcus aureus soon after birth. Within two months of life, half of babies have active colonies and abundant antibodies to fight off most infections. 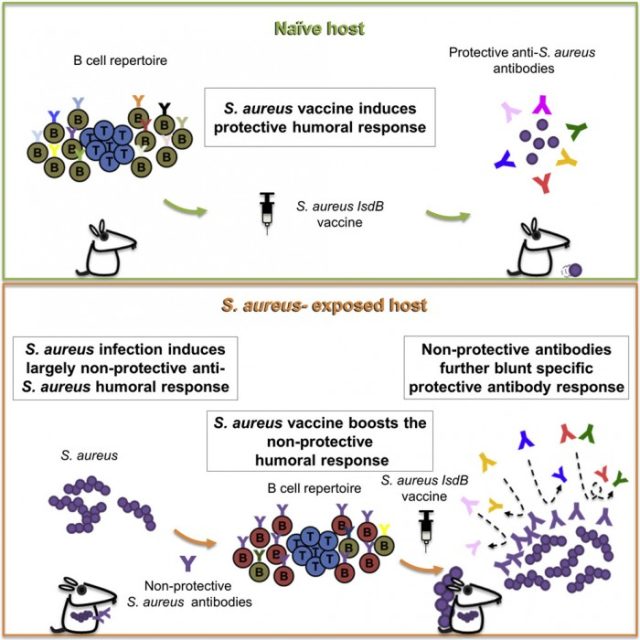 Along with first author Chih-Ming Tsai, Ph.D., a project scientist in his lab, and others, George hypothesized that while laboratory mice that had not been previously exposed to S. aureus would respond well to potential vaccines because they is brand new, but the human version doesn’t work because S. aureus has evolved defenses to ward off therapeutic attacks.

“If the mice had a Staphylococcus aureus infection before vaccination, we don’t think the candidate vaccine might work.”

To test their hypothesis, George, Tsai and co-authors conducted a series of experiments that mimicked the largest failed Staphylococcus aureusylococcal vaccine trial in humans, targeting the IsdB protein that S. aureus uses to obtain the iron it needs to function.

In mice that had not been exposed to normal Staphylococcus aureus, the IsdB vaccine worked, producing antibodies against the entire protein, disrupting the bacteria’s function.

But in mice that had been previously exposed to Staphylococcus aureus, the vaccine produced only antibodies against the unprotected portion of the IsdB protein, leaving bacterial function unaffected.

When the researchers tried to mix human IsdB antibodies with protective antibodies made from the vaccine, the latter stopped working. “We speculate that if we could vaccinate against only the protective component of IsdB, we might be able to prevent the suppression of memory of adverse immune responses,” Tsai said.

And in fact, that’s exactly what the scientists found: When they vaccinated mice against only the protective component of the IsdB protein, the animals were effectively protected, even after previous exposure to S. aureus.

Combined with other experiments, these findings suggest that false memories of pathogens and their corresponding immune responses are likely to be the explanation for failed Staphylococcus aureus vaccine trials in humans, George said.

“It’s even possible that the same principles could explain why many other difficult-to-manufacture vaccines fail,” he said. “If our findings prove correct, an effective Staphylococcus aureus vaccine may not be too far away.”