Of all cancers, ovarian cancer has one of the highest mortality rates.

This is partly due to the cancer’s ability to engage the body’s defense system against it.

However, research recently published by Nagoya University in the journal Matrix Biology suggests that vitamin D may be able to successfully block one of the main ways this cancer uses.

Ovarian cancer often undergoes a process called peritoneal metastasis. Its cells, after detaching from the primary part of the ovary, travel to secondary implantation sites, such as the peritoneal wall or diaphragm, throughout the process.

The peritoneum protects itself from this process by forming a barrier composed of mesothelial cells, preventing cancer cells from adhering and spreading.

By fostering an environment that promotes metastasis, the ability of cancer to metastasize and spread throughout the body is enhanced.

A team led by Dr. Masato Yoshihara from the Department of Obstetrics and Gynecology at Nagoya University’s Graduate School of Obstetrics and Gynecology, in conjunction with researchers at Bell Research Center and the Department of Pathology, found that vitamin D not only hinders this process, but also restores cancer-related mesothelial cells to initial state.

This process increases the ability of mesothelial cells to act as a barrier, limiting the spread of cancer. Their research means that adding vitamin D therapy to the treatment of ovarian cancer may help. 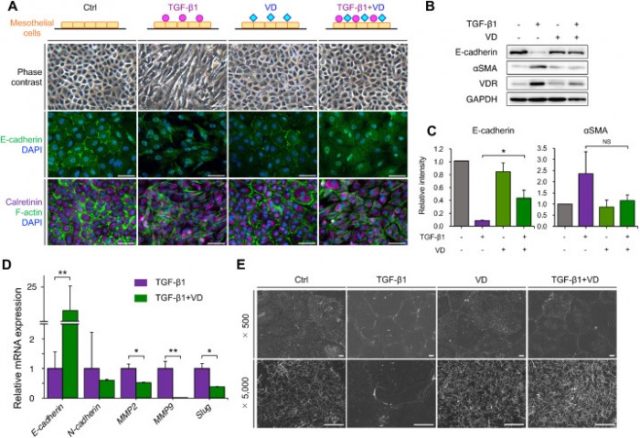 Dr. Kazuhisa Kitami, first author of the study, said: “We have shown the potential of vitamin D to normalize cancer-associated mesothelial cells, the first of its kind. The most interesting aspect of this study is that early detection of While ovarian cancer is still extremely difficult, we show that the peritoneal environment can be restored to a normal state, which prevents cancer cells from adhering and growing.”

Vitamin D can do this because of the complex ways in which cancer spreads.

Previous studies have found that cancer cells secrete a protein called TGF-β1, which is involved in cell growth. This also increases the amount of another protein, thrombospondin-1, through the TGF-beta/Smad pathway.

Thrombospondin-1 has long been of interest to ovarian cancer researchers because it is found in greater numbers in later, more deadly stages of cancer.

In ovarian cancer, thrombospondin-1 is a key protein that enhances the adhesion and proliferation of ovarian cancer cells to the peritoneum.

Since vitamin D disrupts the TGF-beta/Smad pathway, it may protect against cancer.

Dr Kitami explained: “Taking vitamin D helps to normalize the peritoneal environment. This suggests that the combination of vitamin D and conventional therapy can enhance its therapeutic effect on ovarian cancer. We think this helps prevent cancer cells from adhering to the peritoneally, which may make it possible to prevent the recurrence of ovarian cancer.”

The potential of a vitamin to fight cancers affecting women remains an exciting prospect, especially since it does so by restoring the body’s natural defense system.