Special metabolic enzyme may be the key to ovarian cancer metastasis

Special metabolic enzyme may be the key to ovarian cancer metastasis.

Scientists from Duke University and other institutions have revealed the molecular mechanism by which a special enzyme, glucose-6-phosphate dehydrogenase, promotes the growth and metastasis of ovarian cancer in the omentum, the body’s abdominal cavity. Found adipose tissue tentacles.

Ovarian cancer is one of the most lethal gynecological malignancies, and aggressive metastatic disease is responsible for the majority of ovarian cancer-related deaths.

In particular, ovarian cancer tumors preferentially metastasize into the omentum where they rapidly proliferate.

Scientists from Duke University and other institutions have revealed a special Molecular mechanism of the enzyme-glucose-6-phosphate dehydrogenase (G6PD) in promoting ovarian cancer growth and metastasis in the omentum, a tentacle of adipose tissue found in the body’s abdominal cavity thing. 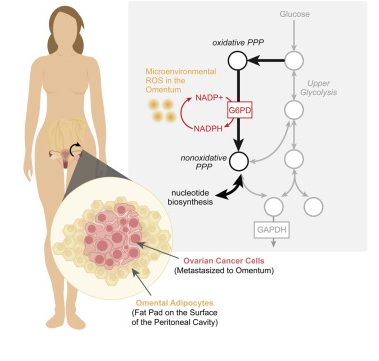 Special metabolic enzymes may be the key to ovarian cancer metastasis.

The 5-year survival rate for 80% of patients diagnosed with stage III or higher ovarian cancer is approximately 30%.

Ovarian cancer typically prefers to migrate and proliferate aggressively in the omentum, which is the source of ovarian cancer cells. Provide fatty acids as a fuel source.

As part of your cells’ increased fatty acid metabolism in ovarian cancer, specific pyrotechnic compounds may be produced that exert a degree of oxidative stress on the omental microenvironment.

Although G6PD is known to be a rate-controlling enzyme in the PPP, its effect on the metastasis of ovarian cancer cells in the omentum has not been analyzed before. to reveal the molecular mechanism behind it.

These preliminary experimental results confirm that the PPP of ovarian cancer cells in the omentum may respond to oxidative stress generated by the metabolism of omental adipose tissue, and that the increased levels of G6PD observed by the researchers in these samples may Providing a link, subsequent inhibition experiments clearly elucidate the effect of G6PD on ovarian cancer cells in the omentum, genetic silencing or pharmacological inhibition of G6PD may induce significant cell death and increase in omentum conditions Levels of key oxidative compounds in cells grown in culture.

The results of these experiments suggest that the presence of G6PD may be required to activate the PPP to counteract the production of oxidative compounds in the omentum.

The researchers further confirmed these results by studying mice injected with genetically altered G6PD-inhibiting OMC cells or mice treated with G6PD-inhibiting drugs, which may lead to smaller metastatic tumors in the omentum.

Our findings suggest that G6PD may be an essential component to counteract oxidative stress from fatty acid metabolism in ovarian cancer cells in the omentum, without which PPP cannot function and metastases Sexual cells succumb to the resulting accumulation of oxidative compounds.

In conclusion, the researchers say that elucidating the mechanisms of metabolic interactions that affect tumor cell survival and metastasis may help to develop novel cancer-targeted therapeutic strategies. The clinical treatment of such invasive and metastatic diseases is of great significance.