14 hospitals in Japan issued a “blood warning”: the medical system collapsed and the epidemic reached a disaster level.

Financial Associated Press, August 17 (Editor Niu Zhanlin) Comprehensive media reports that the directors of 14 hospitals in Kyoto, Japan recently issued a joint statement with a bright red background, warning that the seventh wave of the COVID-19 epidemic that Japan is currently experiencing has reached a “catastrophic level”.

After a lapse of nearly three years, Japan ostensibly has returned to daily life, but in fact, the COVID-19 epidemic is still spreading on such a large scale that it has expanded to the level of a disaster.

The statement emphasized that the beds reserved for COVID-19 patients in Kyoto Prefecture are full, and there are no hospitals that can immediately accept patients.

The deans emphasized that the medical system in the region was already in a state of collapse, and the hospital could no longer save the patients that could have been saved.

“Even patients injured in accidents, strokes and even heart attacks are difficult to be admitted to hospital these days, and we cannot save the lives we could have saved.” 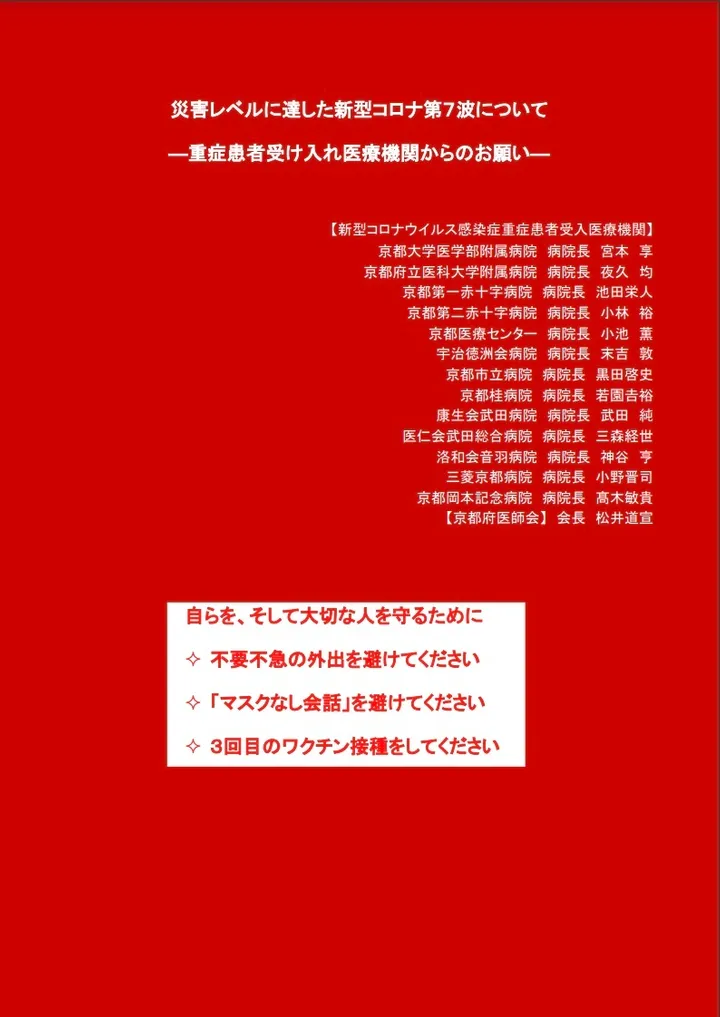 Japan’s Obon holiday in 2022 has just passed. This is the first summer without travel restrictions in three years since the outbreak of the COVID-19 epidemic.

At present, tourism and various activities have resumed as usual, and the city is crowded and overcrowded. It is foreseeable that the epidemic situation in Japan will continue to deteriorate.

The directors of 14 hospitals are also worried about this. They claim that there is a risk of infection in places where people gather, and they call on not to go out unless it is necessary.

They also emphasized that the COVID-19 epidemic is by no means a mild disease such as a simple “cold”.

Including the recent BA.5, many young people will have various sequelae after infection, so it must not be regarded as a simple cold.

The news quickly sparked heated discussions online. Many netizens forwarded the news and said that the epidemic in Japan is indeed in an emergency.

“The medical system has completely collapsed, it is a nightmare”,

“Forcing the hospital to say so, the government is so irresponsible! This is not abandoning the people. policy?”

“After the infection, the fatigue of the body has not been eliminated, and there is also a taste disorder. It is obviously not a common cold after 3 vaccinations.”

According to data disclosed by the Japan Fire Department, under the impact of the COVID-19 epidemic, there were 6,747 cases where ambulances could not immediately decide which hospital to go to after receiving patients last week, of which 2,836 patients were suspected of being infected with the COVID-19 virus.

This number is more than 600 more than the 6,064 cases during the “sixth round of the epidemic” in February, and it is also a record high for the country for the third consecutive week.

14 hospitals in Japan issued a “blood warning”: the medical system collapsed and the epidemic reached a disaster level