Since ancient times, beauty has faded, and aging is a life course that everyone cannot escape.

In the face of aging, we all hope to age gracefully and calmly. However, there is one disease that casts a haze on this unbeautiful aging, and it is Alzheimer’s disease (AD), the most predominant type of dementia.

Several studies have found higher levels of AD pathological biomarkers in the brain and cerebrospinal fluid of women compared with men, and stronger associations with cognitive decline and neurodegeneration. Whether this correlation also exists for AD biomarkers in blood remains unknown .

Recently, a team led by Sarah J. Banks of the Department of Neuroscience at the University of California, San Diego, published a new study in the journal Molecular Psychiatry [1].

The results of this study suggest that gender may influence the clinical interpretation of plasma p-tau181 concentrations .

If this result is reproducible in a larger population sample, this finding will have important implications for plasma p-tau181 as an AD biomarker and screening tool for preventive and therapeutic clinical trials.

AD was first discovered in 1906 by German psychiatrist and pathologist Alois Alzheimer, a neurodegenerative disease with a slow onset and progressive deterioration over time.

Currently, AD has become a global healthcare challenge, affecting more than one in nine adults over the age of 65 in the United States alone [2].

A dominant etiological explanation is the Aβ hypothesis, proposed in 1991, that Aβ deposition in the brain may be the root cause of AD [3].

In addition, the Tau protein hypothesis believes that abnormal Tau protein is the main cause of AD disease development [4].

Although Aβ positron emission tomography and cerebrospinal fluid detection have greatly improved the accuracy of AD diagnosis and prognosis [5-7], these methods are not only expensive but also invasive, making them largely difficult to use in clinical practice on the application.

Therefore, biomarkers in the blood of AD patients may be potential surrogates [8].

Recent studies have shown that plasma p-tau181 can identify individuals with AD, discriminating between Aβ-positive and Aβ-negative individuals with an accuracy comparable to established AD biomarker prediction methods [9]. 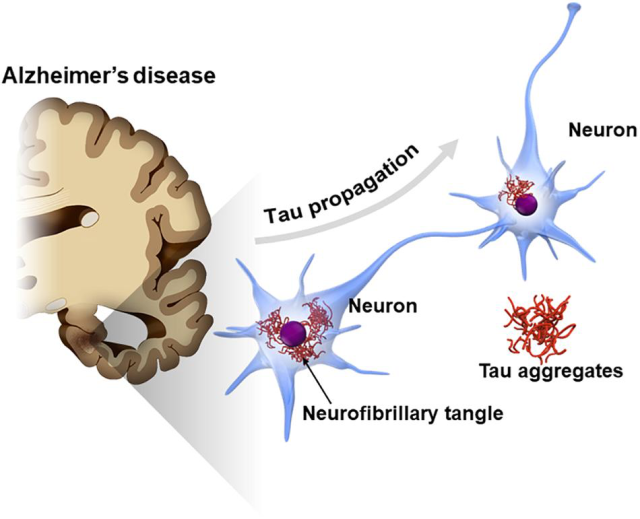 Not only that, there is growing evidence that women with AD gradients have higher levels of CSF and tau in the brain compared to men [12].

However, it is unclear whether similar sex differences exist in plasma p-tau181 and its association with cognitive decline, AD risk, and other AD biomarkers .

In view of this, the Banks team attempted to answer the following three questions:

① whether the cross-sectional and longitudinal levels of plasma p-tau181 differ by gender in individuals with cognitive and clinical gradient profiles;

② whether gender alters the relationship between plasma p-tau181 and CSF p-tau181 tau181, Aβ deposition, glucose metabolism and tau deposition in the brain;

③ Whether gender changes the effect of baseline plasma p-tau181 on cognitive decline and progression to AD dementia. 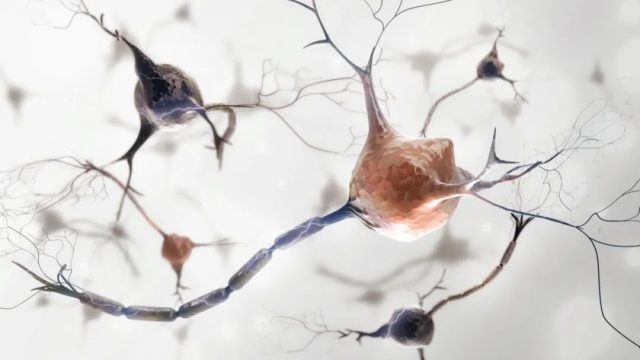 Data for this analysis were obtained from the Laboratory of Neuroimaging (LONI) database (ida.loni.usc.edu) in June 2021.

Compared with men, women in the sample were younger, had fewer years of education, had higher levels of CSF p-tau181 and brain glucose metabolism, were more likely to be cognitively normal, and were less likely to have mild cognitive impairment or dementia (Table 1 ).

To account for gender differences in diagnostic status, we additionally adjusted for the effect of diagnosis in subsequent analyses.

So what is the difference between the sexes in the process of AD?

The Banks team found that while plasma p-tau181 concentrations were similar between the sexes, the phenotypic biomarker profile was worse in women .

The phenotypic biomarker profile was associated with elevated plasma p-tau181 concentrations in women compared with men.

In addition, compared with men, women experienced faster cognitive decline and a greater risk of transitioning to dementia, which was associated with higher baseline plasma p-tau181 levels .

Notably, these gender differences were seen in Aβ-positive participants and individuals with mild cognitive impairment, but not in dementia patients . 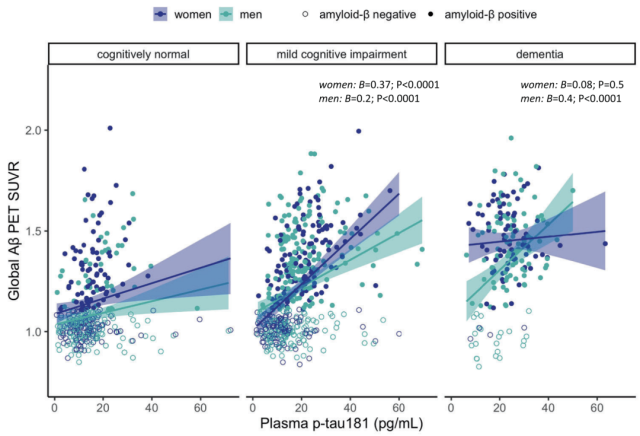 This finding is consistent with previous studies. For example, studies have shown that in the presence of elevated tau load in the brain and CSF, women exhibit faster trajectories of cognitive decline and higher rates of clinical AD diagnosis compared with men [13, 14]; and Studies have shown that although women exhibit greater cognitive resilience in early pathological stages of AD, they experience a faster clinical decline in more advanced stages of pathology [17].

Therefore, it is likely that some of the women in the Aβ-positive and mild cognitive impairment groups in this study broke through a critical point on their AD trajectory, and clinical symptoms began to accelerate .

Gender modulates the association of plasma p-tau181 with cognitive changes

It should be pointed out that this study has certain limitations.

The study sample consisted primarily of non-Hispanic white participants, which limits the generalizability of the findings.

Previous studies have shown that gender differences in clinical AD trajectories differ between racial and ethnic groups [18], and future studies should investigate whether gender affects the clinical interpretation of plasma p-tau181 concentrations in samples from different populations .

In addition, the present study of entorhinal cortex tau deposition was obtained by PET scan, but several years after the measurement of plasma p-tau181.

Although the researchers adjusted their models for this time lag, they were unable to draw conclusions about the temporal nature of the relationship between plasma p-tau181 levels and cortical tau deposition.

If the conclusions of this study are further confirmed, in the future, perhaps by detecting potential sex differences in plasma p-tau181, sex-specific guidelines could be developed, which could also be used as a screening tool in clinical trials, and as a biomarker for the prevention of AD.