According to the World Health Organization (WHO) , nearly 2 billion people are overweight or obese in the world.

From 1975 to 2016, the global obesity rate has nearly tripled, and the number of deaths caused by overweight or obesity is as high as 2.8 million each year .

To reduce the health effects of sugar and the effects of obesity, more and more people are consuming human co-sweeteners instead of normal sugars (sugar substitutes) .

These artificial sweeteners have the sweetness of sugar but are usually not Transformed by the human body so it does not produce calories, it is considered to be a healthy way of eating, so it has gained popularity in recent years.

However, do these artificial sweeteners have any effect on the human body? Are they really healthy?

The study confirms that artificial sweeteners (sugar substitutes) , long considered healthy and widely used, are not inert in the human body and can significantly affect the human gut microbiome, thereby altering the body’s blood sugar levels. 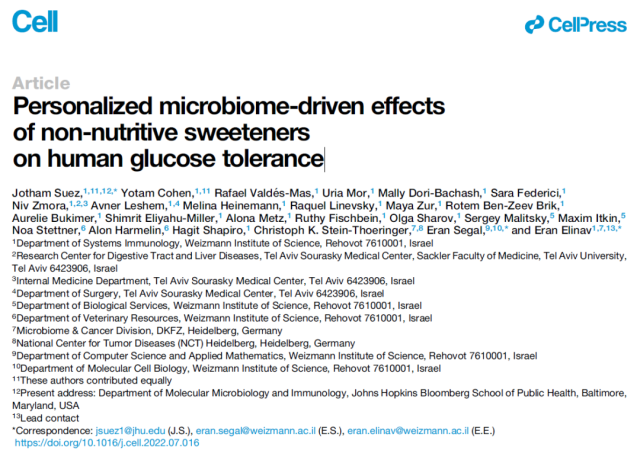 Back in 2014, Eran Elinav’s team at the Weizmann Institute of Science discovered that non-nutritive artificial sweeteners affect the gut microbiome of mice, thereby affecting their blood sugar responses. But it’s unclear whether this also happens in humans.

To address this important question, the research team carefully screened more than 1,300 people who strictly avoided the use of artificial sweeteners in their daily lives, and identified 120 people for follow-up experiments.

The participants were divided into six groups: two control groups and four experimental groups, which received saccharin , sucralose , stevia , and aspartame , respectively . , these intakes are below the FDA’s allowable daily intake standards.

The two control groups received the same amount of glucose or no additional intake, respectively.

Eran Elinav , co-corresponding author of the paper, said that in the participants who consumed artificial sweeteners, it was easy to observe very clear changes in their gut microbial composition and function, as well as molecules secreted into the peripheral blood.

This seems to indicate that the human gut microbes are quite sensitive to each of these sweeteners. Of these artificial sweeteners, saccharin and sucralose have the most significant effect on glucose tolerance in healthy adults .

Moreover, changes in the gut microbiome were highly correlated with changes in people’s blood sugar responses.

To determine causality between these changes, the research team transplanted the gut microbiomes of these human participants into germ-free mice, which had been previously raised in a completely germ-free environment and had no microbiomes of their own.

The results of the experiment were quite surprising.

All the participants who consumed the artificial sweetener showed very similar changes in blood sugar when their gut microbiomes were transplanted into germ-free mice.

The control group participants’ gut microbiome did not change after transplantation.

These results suggest that microbiome changes in response to human consumption of artificial sweeteners may induce changes in blood glucose in a highly individualized manner. 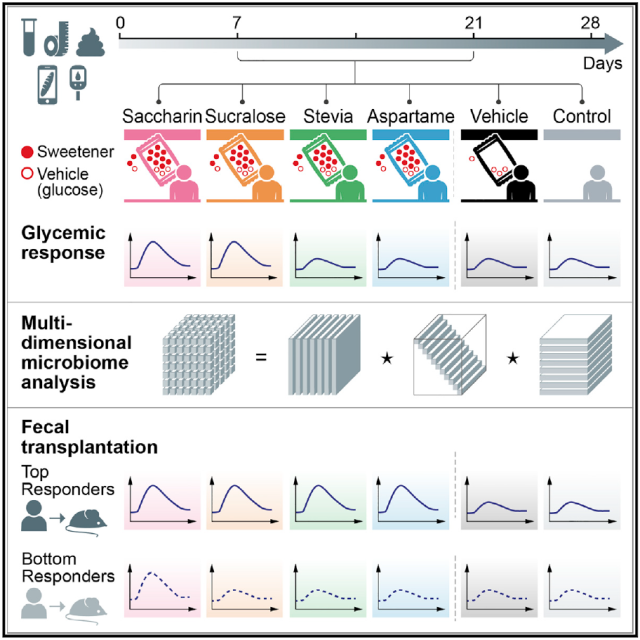 The research team said that the effects of these artificial sweeteners in humans may vary from person to person, after all, everyone’s gut microbiome is highly heterogeneous.

This research suggests that artificial sweeteners are not as inert as previously thought.

But long-term studies are needed to determine whether these changes caused by artificial sweeteners have clinical health effects.

While avoiding sugar, we need to continue to find ways to solve human cravings for sweets.

In my personal opinion, just drinking water seems to be the best solution .