New breakthrough: Short-term use of Rapamycin is sufficient for lifelong anti-aging effects.

Introduction: Rapamycin has the potential to be repurposed for antiaging and longevity. A new challenge, however, should be avoiding the undesired side effects of continuous dosing.

Studies have shown that the antiaging effects of chronic Rapamycin treatment can be achieved by brief pulses of the drug during early adulthood in female flies and mice. In Drosophila, brief early Rapamycin treatment of adults extended lifespan and attenuated age-related gut decline to the same extent as lifelong administration.

Researchers from the Max Planck Institute for Aging Biology in Germany have discovered a “simple version” of an anti-aging method.

The study, published in Nature Aging , shows that brief administration of Rapamycin in early adulthood in laboratory animals can extend lifespan and reduce age-related diseases. 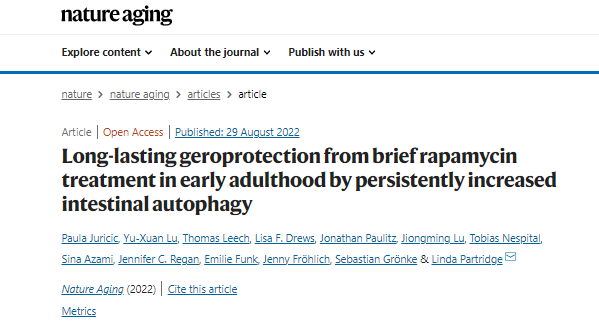 Rapamycin is mainly used in the anti-rejection therapy of kidney transplantation and cancer treatment. In 2009, research funded by the US National Institute on Aging showed that Rapamycin can extend the lifespan of mice, especially its maximum lifespan can be extended by up to 60%, so this molecule is recognized by biologists as the most promising molecule.

One of the promising anti-aging drug candidates.

In order to achieve the maximum effect of anti-aging, research experts generally recommend taking this drug for life.

However, long-term use of this drug will inevitably have some side effects, and it is difficult for most people to take the drug for a lifetime.

The researchers first used fruit flies to test short-term feeding of Rapamycin at different times, and then tracked the lifespan of fruit flies to find the optimal window of medication.

The study found that feeding Rapamycin from the beginning of adulthood in fruit flies only took two weeks to achieve the same lifespan extension effect as lifelong feeding (over two months).

The researchers also observed that this short-term regimen was equally effective at delaying the decline of intestinal function and reducing the incidence of intestinal tumors compared to long-term feeding of Rapamycin . 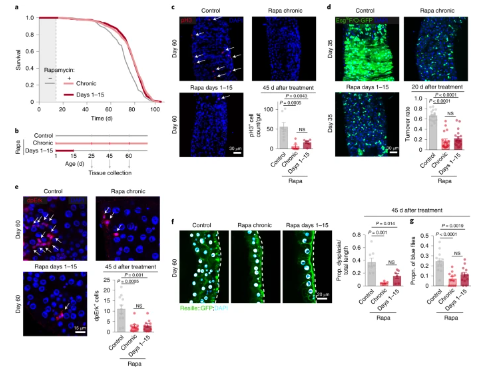 In simple terms, this can be understood as the process of cells using lysosomes to remove waste and recycle waste to become efficient so as to achieve cellular homeostasis and promote cell survival.

Further analysis showed that short-term Rapamycin treatment caused a “memory” effect at the signal level that ultimately must activate autophagy signaling in intestinal cells, not the histone/chromatin structure signaling pathway previously reported by the group. 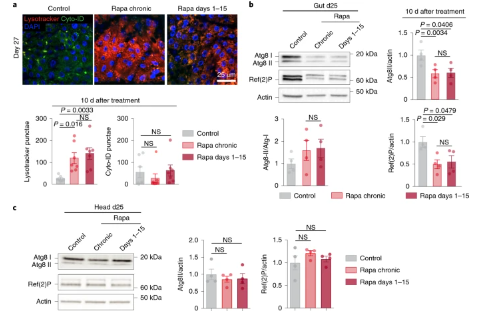 To continue the validation, the researchers tested a short-term regimen of Rapamycin in mice.

The results showed that Rapamycin could also induce a similar “memory” effect in early adult mice for as little as 3 months.

Middle-aged mice (12 months of age) tested for various measures of gut health and showed the same improvement as mice that had been fed the drug for a long time. 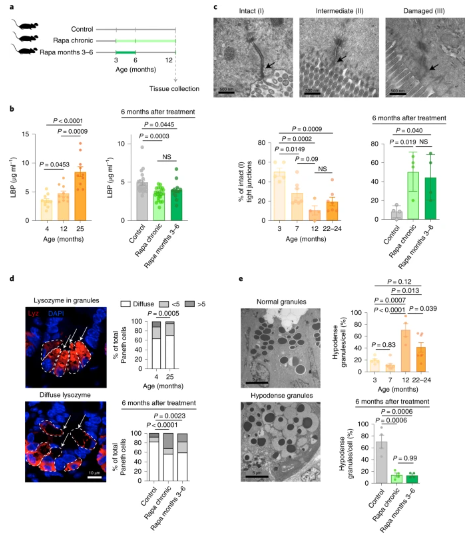 The study revealed the long-term effects of short-term Rapamycin administration, including prolonged activation of autophagy, reduction of age-related intestinal lesions and increased lifespan in Drosophila.

Brief Rapamycin administration in early adulthood induced the same benefits as lifelong treatment, with a key role for enterocytes in the gut.

Importantly, some benefit of early, brief Rapamycin treatment was also observed in the small intestine of mice, suggesting that ‘Rapamycin memory’ is at least partially conserved in this mammalian model.

Given the critical role of autophagy in a range of age-related diseases, including cancer.

The findings suggest that the geriatric protective effect of Rapamycin can be achieved with early, short-term treatment while avoiding the adverse effects of chronic long-term administration.

The data from this study reveal new avenues to achieve geriatric protection through pharmacological interventions.