Scientists have found that artificial sweeteners may significantly alter the body’s blood sugar response and microbiome, with saccharin and sucralose having the most significant effect.

In addition, the Zhiyan Consulting report shows that the market size of sugar-free beverages has increased from 1.66 billion yuan in 2014 to 11.78 billion yuan in 2020, with a compound annual growth rate of nearly 40% .

Many sugar-free foods use non-nutritive sweeteners (NNS) such as aspartame, sucralose, and acesulfame potassium as artificial sweeteners.

NNS is generally considered safe and metabolically “inert.” However, with the in-depth study of the human microbiota in recent years, little is known about whether NNS affects the microbiota to alter host physiological metabolism .

Recently, a research team led by Prof. Eran Elinav and Prof. Eran Segal from the Weizmann Institute of Science in Israel published important research results in the journal Cell [4].

They conducted a randomized controlled trial designed to assess the effects of NNS on human metabolic health and microbiome. The researchers tested four NNSs: aspartame, saccharin, stevia, and sucralose.

The researchers found that dietary supplementation with sucralose and saccharin impaired glycemic responses in healthy volunteers who were strictly not using NNS .

This study demonstrates that NNS is not metabolically “inert” as previously thought, and can profoundly alter human physiology through gut microbes.

Next, let’s take a look at how Eran Elinav’s team carried out this research.

Participants were divided into six groups, two as the control group, and four as the NNS intervention group, with 20 participants in each group (Figure 1).

Of the two control groups, one was supplemented with the same amount of glucose (5 g/day) and the other group received no supplement. The four NNS intervention groups were aspartame, saccharin, sucralose, and stevia .

The daily doses taken by the participants were:

④ 0.18 grams of stevia (steviol glycosides) + 5.82 g glucose, both below the acceptable daily intake for the corresponding NNS . (figure 1)

The study consisted of three phases: Baseline data on participants’ metabolism and microbiome were collected on days 0-7.

To assess the effect of NNS on blood glucose, participants wore a continuous glucose monitor (CGM) throughout the trial and underwent a standardized glucose tolerance test (GTT) on selected days.

In addition, participants had metabolic and microbiome samples collected on specific days, and their food intake and physical activity were recorded using the APP. 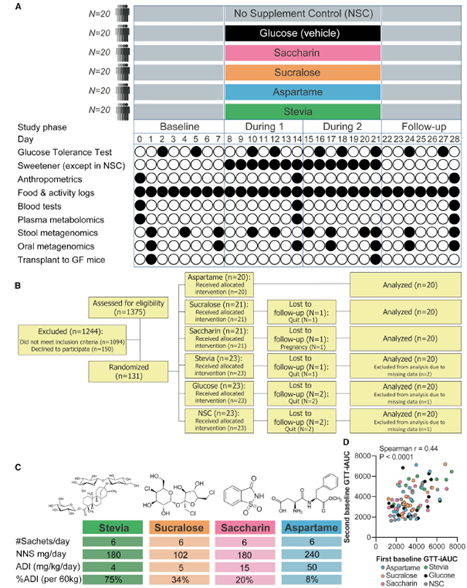 Let’s first look at the effect of NNS on glucose tolerance.

We constructed two linear mixed-effects models, model A including seven GTT data at baseline and intervention period, and model B including all GTT data (Figure 2A).

The results of the analysis showed that after dietary supplementation with saccharin and sucralose, the glycemic response of participants was significantly increased in model A, but not in model B, compared with the two control groups (Fig. 2A).

However, dietary supplementation with aspartame and stevia did not significantly affect participants’ glycemic responses in either model (Figure 2A).

To compare effects between groups, the investigators normalized to the incremental area under the curve (iAUC) for glucose in participants’ GTT.

During follow-up, the glycemic responses returned to normal in both groups (Figure 2D).

In simple terms , saccharin and sucralose impair glucose tolerance in healthy individuals even when short-term intake is below the acceptable daily intake . 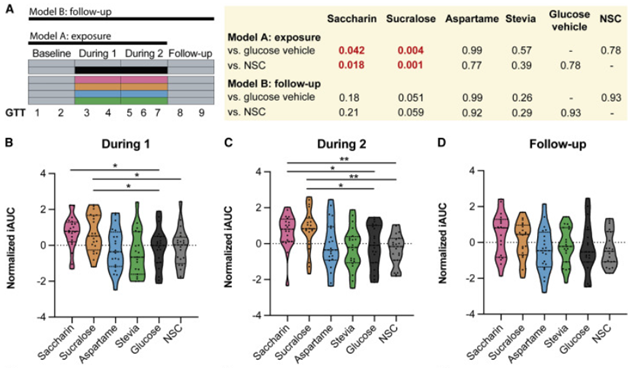 Figure 2: Supplementation with saccharin and sucralose adversely affects the glycemic response in humans

Next, the researchers looked at the effects of NNS on gut microbes.

Notably, the gut microbes of the participants were not significantly altered in either control group. 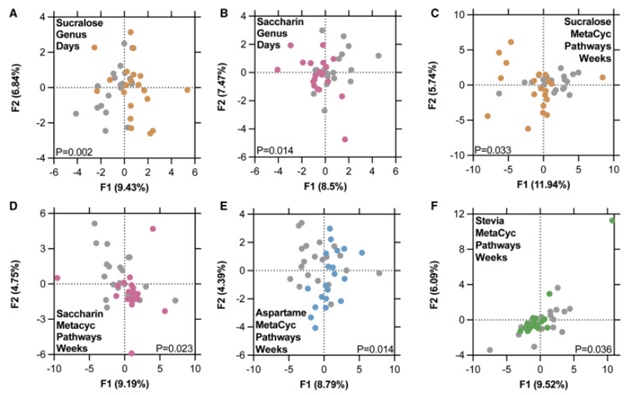 The researchers first analyzed metagenomic data and found that after NNS supplementation, changes in the function and structure of gut microbes were indeed associated with blood glucose responses.

For example, the metabolic pathways associated with glycemic control in the gut microbes of participants were significantly altered after sucralose supplementation .

However, data from human clinical trials can only demonstrate correlation, not causation. To this end, the researchers also used the germ-free (GF) mouse model to further explore .

The researchers selected 7 people in each NNS intervention group.

The researchers transplanted fecal bacteria samples from these participants on days 1 and 21 into GF mice and observed changes in blood sugar.

The results showed that after receiving the fecal bacteria transplant, the mice showed a similar blood sugar response to the corresponding participants .

It should be noted that glycemic responses did not change if fecal bacteria from control participants were transplanted into GF mice (Fig. 4E-F).

The gut microbial composition of different individuals is highly heterogeneous during NNS supplementation . 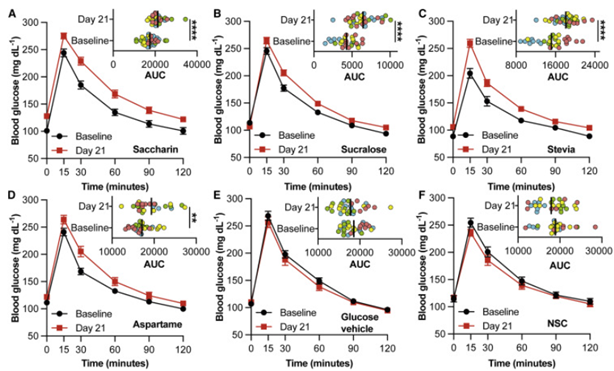 This study shows that many substances that were previously thought not to be metabolized by the body are likely to be sensed and metabolized by gut microbes, thereby affecting the host. Well, food additives that are currently generally considered safe, such as dietary emulsifiers, food preservatives, and colorants, may also pass through the host microbiome and, in some cases, alter the host’s metabolism.

This study reminds us that the metabolic activity and safe dosage of NNS should be evaluated more comprehensively, and the relevant evaluation criteria should also be updated with the times .

Of course, this study also has limitations , such as fewer volunteers enrolled in the study, significant differences in the dose of NNS intervention, and shorter NNS intervention and follow-up time, which may affect the reliability of the relevant conclusions.