During the summer and fall of 2019, some cancer patients experienced abrupt interruptions in treatment due to shortages of two commonly used cancer chemotherapy drugs , vinblastine and vincristine .

The shortage of these two cancer drugs, which lasted from 2019 to 2021, was mainly due to the delayed supply of dried periwinkle leaves.

On August 31, 2022, researchers from the Technical University of Denmark, the University of California, Berkeley and other institutions published a research paper entitled: A microbial supply chain for production of the anti-cancer drug vinblastine in Nature .

The research team genetically engineered yeast to produce vindoline and catharanthine , then purified the two precursors and coupled them to produce vinblastine .

Therefore, It is also immune to plant diseases and natural disasters.

The study is also the longest biosynthetic pathway ever reprogrammed in a microorganism . 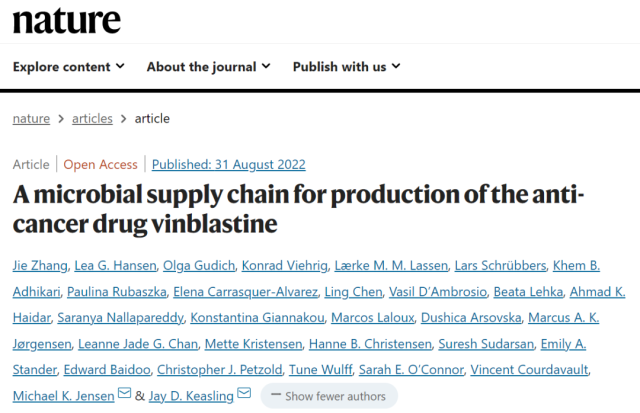 Jie Zhang , the first author of the paper and a researcher at the Technical University of Denmark, said that in the past few years, we have seen several shortages of drugs such as vinblastine, and this is likely to happen again in the future, and probably more frequently.

Of course, these cell factories will need to be further upgraded and optimized to ultimately achieve economical and efficient production.

Vinblastine belongs to the so-called monoterpene indole alkaloids (Monoterpene Indole Alkaloids, MIA) , which have strong biological activity and can be used to treat various diseases .

However, they are highly complex organic molecules themselves and thus difficult to synthesize chemically. The research team chose vinblastine in order to demonstrate the feasibility of microbial cell factories to manufacture all monoterpene indole alkaloids (MIAs) .

Vinblastine has the most complex production pathway known, and the whole process involves more than 30 enzymatic reactions.

Therefore, the biggest challenge for this research is how to genetically reprogram yeast cells to carry out more than 30 enzymatic reactions, and also ensure that the reprogrammed cells can function as needed, while also maintaining themselves.

The research team performed a total of 56 gene edits in yeast, including heterologous expression of 34 plant genes, knockout, knockdown and overexpression of 10 yeast genes, and integration of 31 biosynthetic pathways into yeast.

The engineered yeast produces vindoline and catharanthine , which are then purified and coupled to produce vinblastine . 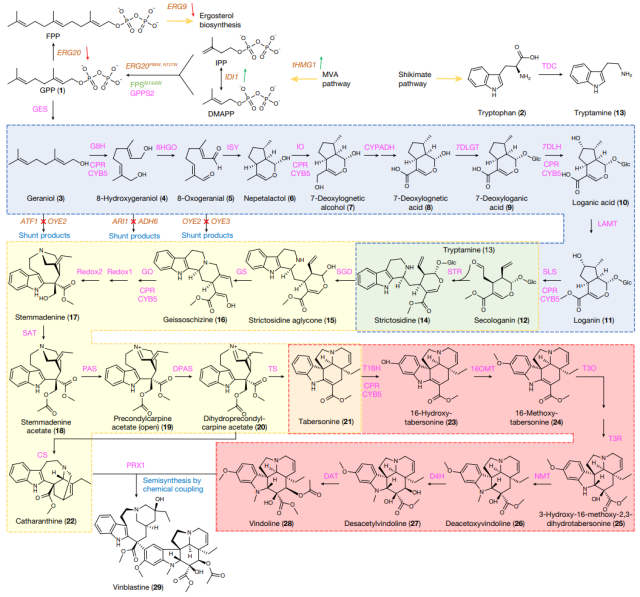 Yeast is expected to serve as a scalable platform in the future to produce more than 3,000 monoterpene indole alkaloids (MIAs) as well as millions of analogs of natural products, the team said.

The study further highlights a recent development in synthetic biology – the use of genetically engineered yeast for drug production.

The use of cheap and renewable substances to produce drugs that would otherwise be derived from plants in industrial-scale fermenters promises to alleviate future drug shortages, opening up a sustainable, more economical, and farmed/grown-independent New avenues for drug production.

The study’s corresponding author, Professor Jay D. Keasling of the Technical University of Denmark/UC Berkeley, is a pioneer in the industrialization of synthetic biology.

As early as 2003, his laboratory was the first to engineer E. coli to produce the antimalarial drug Artemisia annua precursor molecule.