The mystery of how egg cells enter a dormant state without losing their ability to reproduce has been solved by researchers at CRG.

Immature human egg cells bypass a key metabolic process thought to be necessary for energy production, according to research published in Nature by the Center for Genome Regulation (CRG).

These cells modify their metabolism to stop producing reactive oxygen species, and these dangerous molecules can build up, damage DNA and cause cell death.

The study explains how human egg cells can lie dormant in the ovary for up to 50 years without losing their ability to reproduce.

Aida Rodriguez, PhD, a postdoctoral researcher at CRG and lead author of the study, explained: “Humans are born with all of their lifetime supply of egg cells.

Since humans are also the longest-lived terrestrial mammals, egg cells must remain pristine while Decades of wear and tear are also to be avoided.

We found that this problem is solved by skipping an essential metabolic reaction that is also a major source of cellular damage.

As a long-term maintenance strategy, it’s like putting a battery Put it in standby mode.

This represents a whole new paradigm that has never been seen in animal cells.” 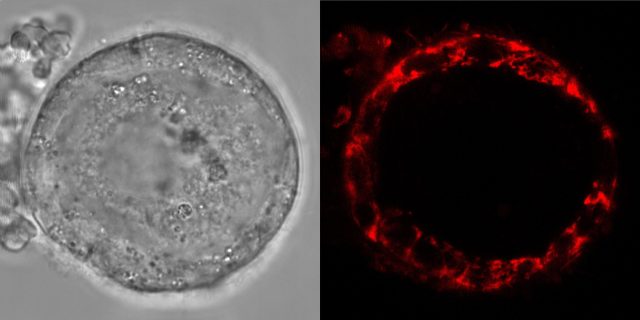 Human eggs first form in the ovary during fetal development, where they go through different stages of maturation.

During the early stages of the process, immature egg cells called oocytes enter a phase of cell arrest and lie dormant in the ovary for up to 50 years.

Like all other eukaryotic cells, egg cells have mitochondria, which they use to generate energy to meet their dormant needs.

Using a mixture of in vivo imaging, proteomic and biochemical techniques, the researchers discovered that mitochondria in human and Xenopus oocytes use an alternative metabolic pathway to create energy not previously observed in other animal cell types been there.

A complex of proteins and enzymes called complex I is the “gatekeeper” that initiates the reactions needed to produce energy in the mitochondria.

This protein is essential and works in the cells that make up organisms from yeast to blue whales.

However, the researchers found that complex I was almost absent in egg cells.

The only other type of cell known to survive depletion of complex I levels is all the cells that make up the parasitic plant oak.

According to the study’s authors, the study explains that some women with complex I-related mitochondrial diseases, such as Leber’s hereditary optic neuropathy, did not experience fertility compared to women with other complexes affecting mitochondrial respiration reason for the decrease.

“Complex I inhibitors have previously been proposed as a cancer treatment. If these inhibitors show promise in future studies, they have the potential to target cancer cells while sparing oocytes,” the study’s lead author said. Dr. Elvan Böke, first author of the paper and head of the CRG Cell and Developmental Biology project team, explained.

Oocytes are very different from other types of cells because they must strike a balance between longevity and function.

The researchers plan to continue this research direction and unravel the sources of energy used by oocytes during prolonged dormancy in the absence of complex I, one of which is to understand the impact of nutrition on female fertility.

Dr Böke concludes: “One in four female infertility is unexplained – this shows a huge knowledge gap in our understanding of female reproduction. Our goal is to discover strategies for oocytes to remain healthy for many years (eg Sophisticated I) is lacking in order to figure out why these strategies ultimately fail with age.”