p53, a well-known cancer-related gene, we can often see it appearing in related literatures such as colon cancer, lung cancer, liver cancer, etc.

The form of tumor suppressor and cancer promotion can be changed at will. Scientists pursue it hard, so that when it escapes, he chases it . A long-term drama that is hard to fly.

But if, I mean if, p53 appears in a story where sun protection and weight loss are the protagonists. . . Don’t be in a hurry to scold nonsense, UV exposure leads to foraging behavior, and there is really no way to go without p53 .

However, weight gain is only effective in men, and estrogen in women suppresses UV-exposure-induced increases in ghrelin [1].

The findings were published in Nature Metabolism.

The history of human research on ultraviolet rays is not too short. In 1928, ultraviolet light became a recognized carcinogen, and humans began a large-scale “sunscreen culture”; but soon, it was found that ultraviolet light can reduce the risk of cardiovascular disease, and “sunbathing” became a healthy activity again.

Could it be that how much you eat is also related to the intensity of UV rays? Is there even such a big gender difference?

With these questions, Professor Carmit Levy officially started his exploration.

First of all, it is necessary to verify whether ultraviolet rays really have an effect on appetite. The researchers recruited 32 dermatological patients who received phototherapy for 10-12 UV exposures (0.1-2.5 J/cm²) 2 or 3 times a week. Using the Disease-Related Appetite Questionnaire (DRAQ), the researchers found that men who received phototherapy had a stronger appetite, felt more hungry, and ate a greater amount of food per meal . Women did not have these changes after receiving light therapy.

This suggests that UV exposure did alter men’s appetite and food intake. So, do male mice respond the same way?

In order to increase the exposure area to UV light, the mice were shaved back, so that the exposed area reached about 50%-60% of the whole body area. Mice were exposed to 50mJ/cm² of UV light for 10 weeks. Under such conditions, male mice showed obvious changes in foraging behavior, eating more frequently and in larger quantities, but female mice’s foraging behavior did not change.

UV exposure has no effect on metabolic levels in mice, but male mice gain weight

The researchers also found that the mice’s metabolic levels did not rise or fall as a result of UV exposure .

Hormones that play a key role in , such as insulin concentrations, did not change significantly in both male and female mice.

So, this ghrelin is the key to increased appetite?

Ghrelin, as the name suggests, is primarily produced by the stomach, and levels increase during starvation. But if the stomach is removed, the level of ghrelin in the blood is only reduced by 65%, that is, there are other tissues involved in the secretion of ghrelin.

Although it sounds incredible, a series of studies have proved that skin tissue is indeed involved in the secretion of various hormones, and subcutaneous fat cells are another source of ghrelin expression [2]. 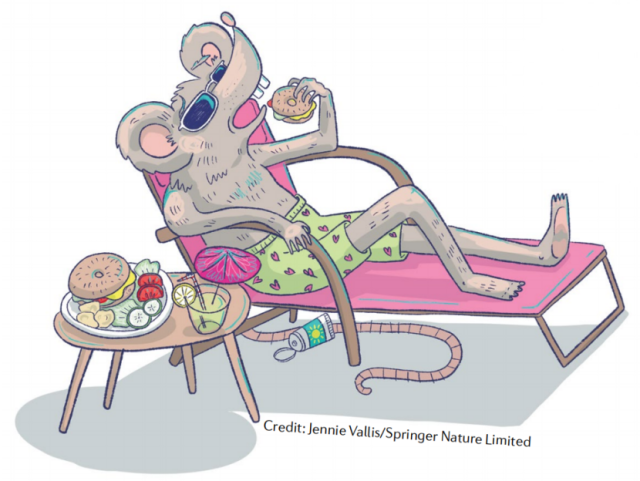 As for the elevated ghrelin levels caused by UV exposure, the “suspect” of subcutaneous fat cells is more serious.

Using ex vivo human skin, the researchers simulated UV exposure and found that ghrelin in subcutaneous fat cells in men peaked at 8 h of exposure , while ghrelin expression in women was unaffected.

Next, the researchers used ghrelin receptor antagonists on the mice.

After UV exposure, the experimental mice ate as usual, but the food intake was not as good as before the drug, indicating that ghrelin is indeed mediated by UV exposure. resulting in elevated food intake in male mice.

The researchers compared the differentially expressed promoter sequences before and after UV exposure, got some possible transcription factor binding sites, and found, oh, p53, why are you here ? 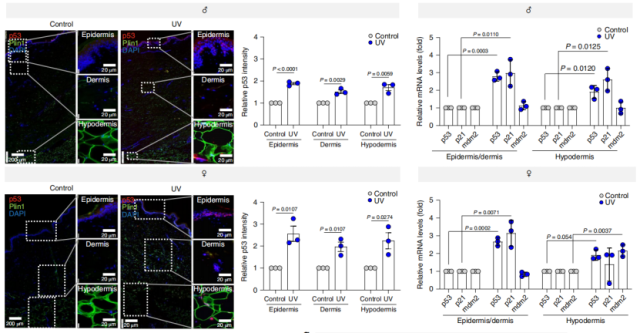 The researchers constructed a subcutaneous adipocyte p53-deficient mouse model and found that UV exposure at this time could no longer induce increased ghrelin levels in male mice , and naturally there was no longer any changes in appetite and food intake. There was no weight gain either.

So why were female mice unaffected by UV exposure?

The researchers looked through the data and found that although no clear mechanism was found, there was indeed some association between ghrelin and sex hormones.

In men, ghrelin is positively correlated with testosterone levels, while in women the hormone estradiol is associated with suppression of ghrelin synthesis .

In the process of in vitro skin tissue culture, the researchers also found that female estrogen and receptor levels were significantly higher than males.

When female mice were ovariectomized, UV-induced changes in appetite and food intake were also observed.

Previously, it was all UV exposure simulated by the laboratory. What is the effect of UV exposure from nature (the sun)?

The researchers recruited 27 volunteers, 13 males and 14 females, aged 18-55, who were exposed to the sun for 25 minutes (UV exposure of approximately 2000 mJ/cm²) in a sleeveless top and shorts, before sunbathing.

Blood samples were collected one day and the next day, and appetite-related questions were asked by a professional psychological counselor.

Compared to normal, men felt hungrier, women reported no significant differences in hunger levels, and ghrelin levels all showed similar changes as before .

However, don’t think this is a simple “weight loss” and “weight gain” study. Ghrelin has anti-inflammatory properties that inhibit myocardial atrophy and lower arterial pressure, possibly related to the cardiac benefits of sunbathing. In addition, ghrelin has learning-enhancing, anti-anxiety and neuroprotective properties.

Or looking a little further, is there still unexplored territory between skin fat and brain function?

Among the many ideas, the researchers chose the seemingly simplest one as the end of the article, “the scope of application of light therapy may be expanded as a result.”