Why is this startup so attractive? Let’s look at the key words: LNP , mRNA , in situ CAR-T in vivo , the founding team includes Carl June (father of CAR-T) , Drew Weissman (founder of mRNA technology) , Jonathan Epstein (inventor of in situ CAR-T technology in vivo ) people).

On September 14, 2022, Capstan Therapeutics announced the completion of $165 million in financing (including $63 million in seed financing and $102 million in Series A financing) to advance in vivo in situ CAR-T therapy to the clinic .

Capstan also announced the appointment of Laura Shawver as president and CEO. Laura Shawver had previously served as CEO of two new drug development companies, Synthor x and Silver back .

The company’s in situ CAR technology consists of three interrelated components— a non-viral delivery system , a cell-specific targeting molecule , and a disease-engineered payload . 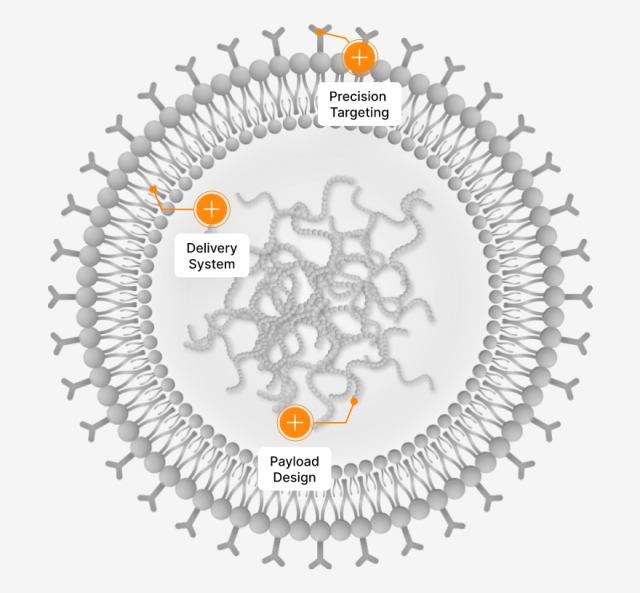 Targeting the latter for the treatment of inherited blood disorders. 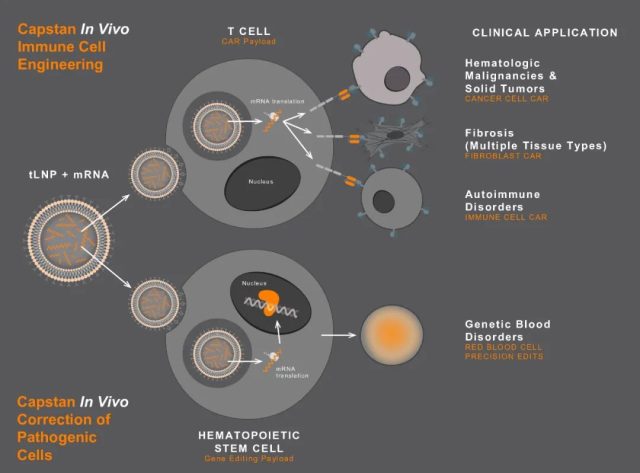 This method is similar to an mRNA vaccine. It only takes one injection to generate CAR-T cell therapy in the body, which is expected to solve the current problems of complex process, long cycle and high price of CAR-T therapy .

However, until now, CAR-T cell therapy has required harvesting a patient’s own T cells, which are then genetically reprogrammed in the lab to recognize specific cancer cells, so that they can be identified and killed when infused back into the body.

The whole process is complicated and time-consuming, so the price is very expensive, and the price is often hundreds of thousands of dollars.

The CAR-T cell therapies currently on the market are all for the treatment of blood cancers, but they have also shown promising results in many other types of diseases.

As early as 2019, Jonathan Epstein ‘s team at the Perelman School of Medicine at the University of Pennsylvania published a paper in Nature confirming that CAR-T cell therapy can target overactive cardiac fibroblasts to restore cardiac function .

However, this CAR-T cell therapy has a serious drawback in the treatment of cardiac fibrosis-related diseases because fibroblasts have important functions in the human body, especially in wound healing.

In vitro reprogrammed CAR-T cell therapy, once injected into the human body, can exist in the human body for months or even years, thereby inhibiting fibroblasts for a long time and impairing functions such as wound healing. 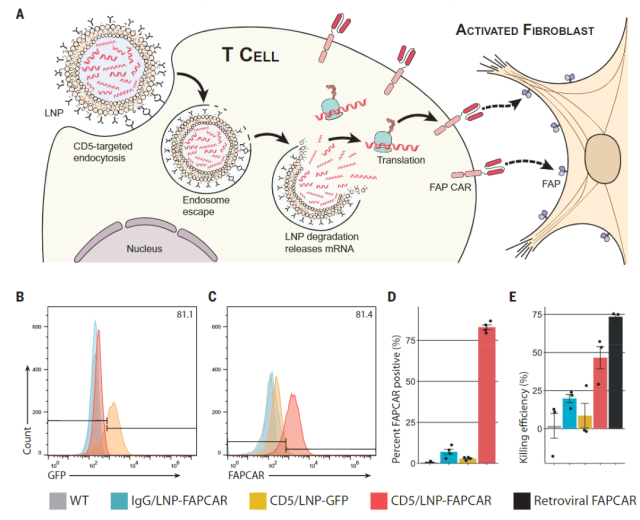 Then, the research team conducted a treatment experiment on a mouse model of cardiac injury.

The mRNA was encapsulated by CD5/LNP and then injected into the mouse. These mRNA molecules successfully entered the mouse T cells, effectively reprogrammed the T cells, and made them tick.

Targeted attack on activated fibroblasts. This reprogramming was temporary, the mRNA was not integrated into the T cell genome, and after a few days, the T cells recovered and no longer targeted fibroblasts.

Importantly, in just a few days, the mRNA induced reprogramming of large numbers of CAR-T cells, resulting in a significant reduction in cardiac fibrosis in mice and restoration of normal heart size and function .

As long-term effects, it does not inhibit fibroblasts for a long time and impair functions such as wound healing.

Traditional CAR-T cell therapy requires the extraction of patient’s T cells, genetic modification, reprogramming and expansion in the laboratory and then infusion into the patient.

The whole process is complicated and costly, making this breakthrough treatment method difficult to promote.

The transient engineered CAR-T cell therapy developed in this study, which delivers mRNA through LNP to generate CAR-T in vivo, greatly expands the application prospects of CAR-T and mRNA technology.

Moreover, this method More controllable and simpler in process, it is expected to significantly reduce the cost and price of CAR-T cell therapy.