The findings may help explain how a high-fat diet triggers inflammation that can lead to insulin resistance, type 2 diabetes and other complications in obese individuals.

Invasion of adipose tissue by inflammatory immune cells called monocytes is a hallmark of obesity, but what causes this harmful phenomenon is unclear. 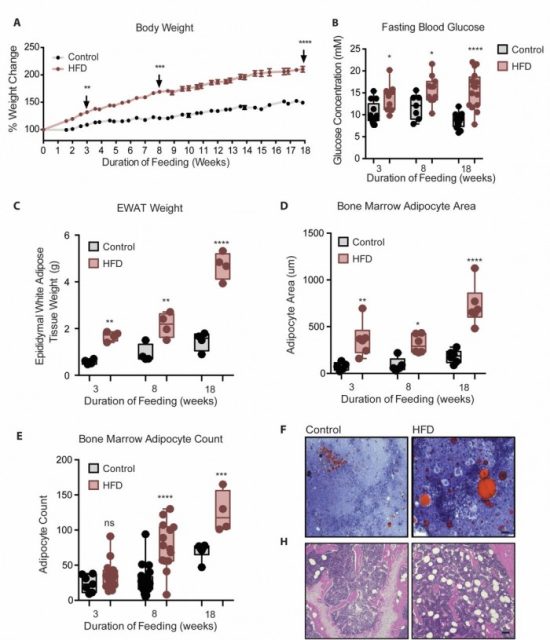 “We wondered whether bone marrow tissue is an early responder to a high-fat diet, which may be a precursor to the inflammation observed in obesity,” said senior author, SickKids Senior Scientist in Cell Biology and Professor of Pediatrics, Biochemistry and Physiology at the University of Toronto, Canada Amira Klip said. “Do bone marrow changes induced by a high-fat diet lead to the production of inflammatory monocytes that invade adipose tissue in obese people?”

Adipocytes in the bone marrow proliferate and take on the characteristics of white adipocytes.

The monocytes in the bone marrow cells also undergo metabolic changes—they use less oxygen to break down sugar for energy, and lactic acid builds up in the cells and surrounding fluid.

The team also found that mitochondria, the cell factories that break down sugars for energy, split into pieces within monocytes less efficiently.

The process of mitochondrial fragmentation is associated with insulin resistance.

Ly6Chigh is a monocyte that invades the adipose tissue of obese people.

The accumulation of Ly6Chigh monocytes in the bone marrow begins before monocytes form inflammatory macrophages—the mature form of monocytes—in adipose tissue elsewhere in the body.

“These results suggest that a high-fat diet can lead to remodeling of bone marrow adipocytes, disrupting the normal balance of monocytes, and possibly subsequent spillage of invasive Ly6Chigh monocytes into the body,” Klip continued.

They also found that more abundant brown adipose tissue in lean people can lead to the transformation of non-invasive Ly6Clow monocytes .

“Our study sheds light on how a high-fat diet triggers an inflammatory cascade in vivo involving the bone marrow,” concludes Klip. “More research is needed to further understand this process and to find out if there are ways to prevent or reverse it. It is also important to know whether the bone marrow is also an early responder of obesity in humans. Knowing more may lead to treatments New treatments for obesity and preventing complications such as diabetes.”