It is common in myopathy such as stroke, trauma, cerebral palsy, and multiple sclerosis patient.

Muscle spasm and back spasm pain after nervous system injury make most patients unable to live and work normally, thus causing a serious burden on the patient’s family and society. The current treatment options for skeletal muscle spasms mainly include the use of muscle relaxants for drug therapy or direct surgical treatment.

However, since the targets of these drugs are upstream regulators that control muscle contraction, they are prone to cause side effects in the nervous system and cardiovascular.

In addition, surgical treatment through highly selective dorsal root rhizotomy can also easily lead to serious side effects, such as spinal paralysis, chronic back pain, sensory dysfunction, and cyst formation. Therefore, there is an urgent need to develop a new generation of antispasmodic drugs that can directly target muscle contraction effect proteins while avoiding various side effects such as the nervous system and cardiovascular system.

Myosin is an important effector protein in the process of muscle contraction. It is a type of ATP-dependent molecular motor in eukaryotic cells. It has ATP hydrolase activity and can use the energy generated when ATP is hydrolyzed to promote muscle contraction. . Myosin is a very large superfamily consisting of multiple members.

It is worth noting that in skeletal muscle, in addition to MyHC 2 X/D, and the three rapid subtypes of MyHC2A and MyHC2B, which have skeletal muscle specificity, other subtypes will interact with myosin 2 in other tissues such as heart muscle. It is highly similar in sequence and structure.

For example, the slow subtype encoded by the MyH7b gene is very similar to β-myosin in the heart muscle, which poses a challenge for the development of antispasmodic drugs that act on skeletal muscle with high selectivity.

Recently, Hungarian researchers reported on Cell the key residue difference between skeletal muscle and cardiac myosin type 2 in the communication center of the functional area, which can enable the development of direct and selective targeted treatment of spasticity and muscle stiffness. become possible. 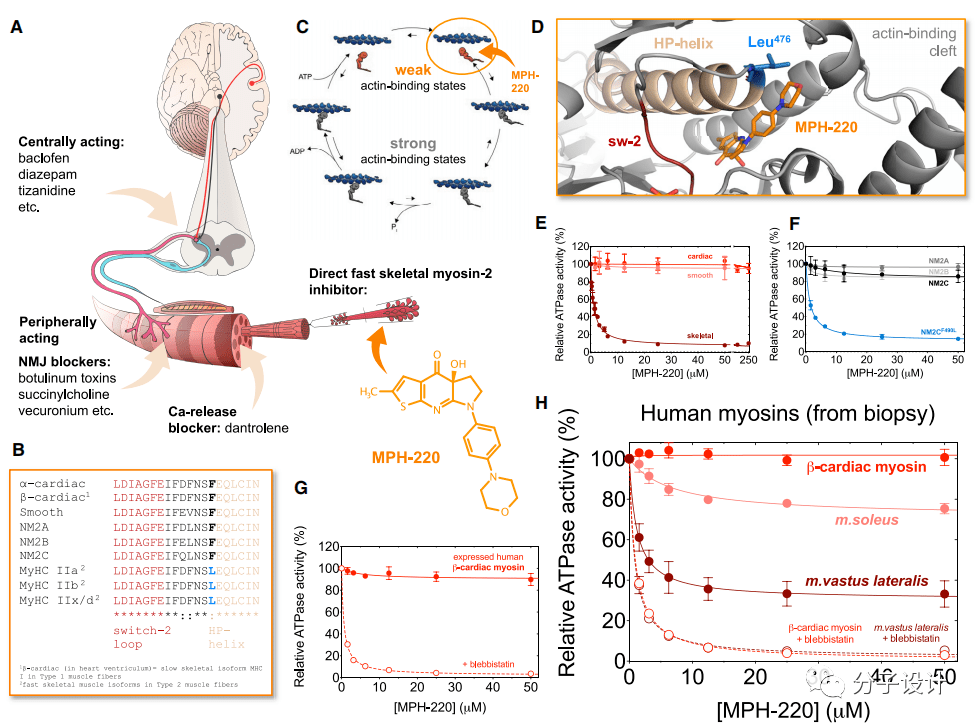 The researchers first conducted in-depth research on the structure of MyHC IIa myosin, and developed and optimized a small molecule inhibitor that can be embedded in the Blebbistatin binding pocket—MPH-220 (Figure A). Experiments have shown that MPH-220 can specifically inhibit the fast-type skeletal muscle myosin 2 from the rabbit prune muscles, but has no effect on the myosin 2 on other tissues including porcine myocardium and smooth muscle (Figure E , F).

In order to test this hypothesis, the researchers mutated the alanine at the corresponding position in the 2C subtype of non-muscle myosin to leucine, and found that before the mutation, MPH-220 had an effect on non-muscle myosin. The protein 2C subtype has no effect, and after mutation, a significant inhibitory effect can be observed, which further confirms the researchers’ hypothesis (Figure E).

Considering the selectivity of MPH-220 for myosin samples and assessing its potential as a new generation of antispasmodic drug candidates, the researchers next performed ATPase activity inhibition experiments on human-derived myosin samples. The results show that MPH-220 has no inhibitory effect on the expression and purification of β-cardiac myosin 2 (Figure G).

The researchers then further conducted experiments with patient-sourced biopsy samples and got similar results. In addition, through the analysis of two muscle tissues containing different ratios of rapid skeletal muscle myosin 2, the researchers found that the inhibitory effect of MPH-220 on them is only partial, which shows that MPH-220 can only selectively inhibit rapid Myosin type 2 (Figure H). These experimental results provide an experimental basis for the safe and systematic use of MPH-220 in human patients in the future. 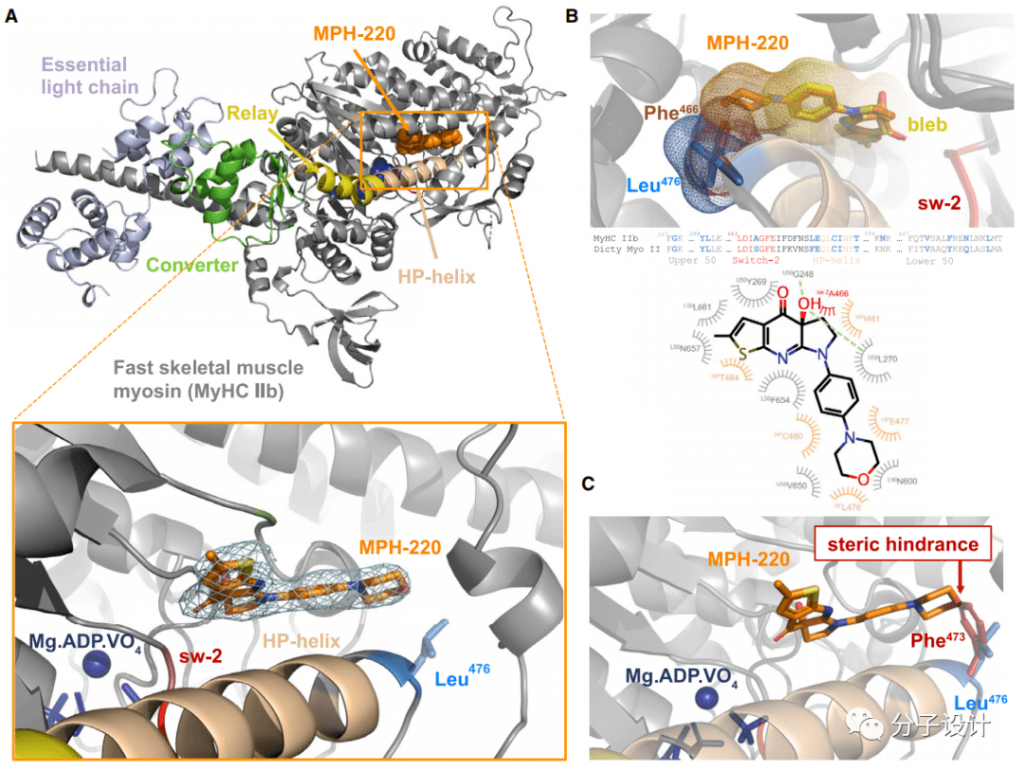 Then, comparing this structure with the structure of Blebbistatin-bound myosin 2 and found that the core regions of these two inhibitors are very similar in positioning, and their chiral hydroxyl groups interact with G248 and L270 (Figure B)

However, the alanine corresponding to the 476th leucine of fast-type skeletal muscle myosin 2 in cardiac myosin 2 brings steric hindrance to MPH220 (Figure C). This finding just provides a reasonable explanation for the previous experimental results, and shows that L476 is indeed the key structural basis for MPH220 to exert a highly selective inhibitory effect. 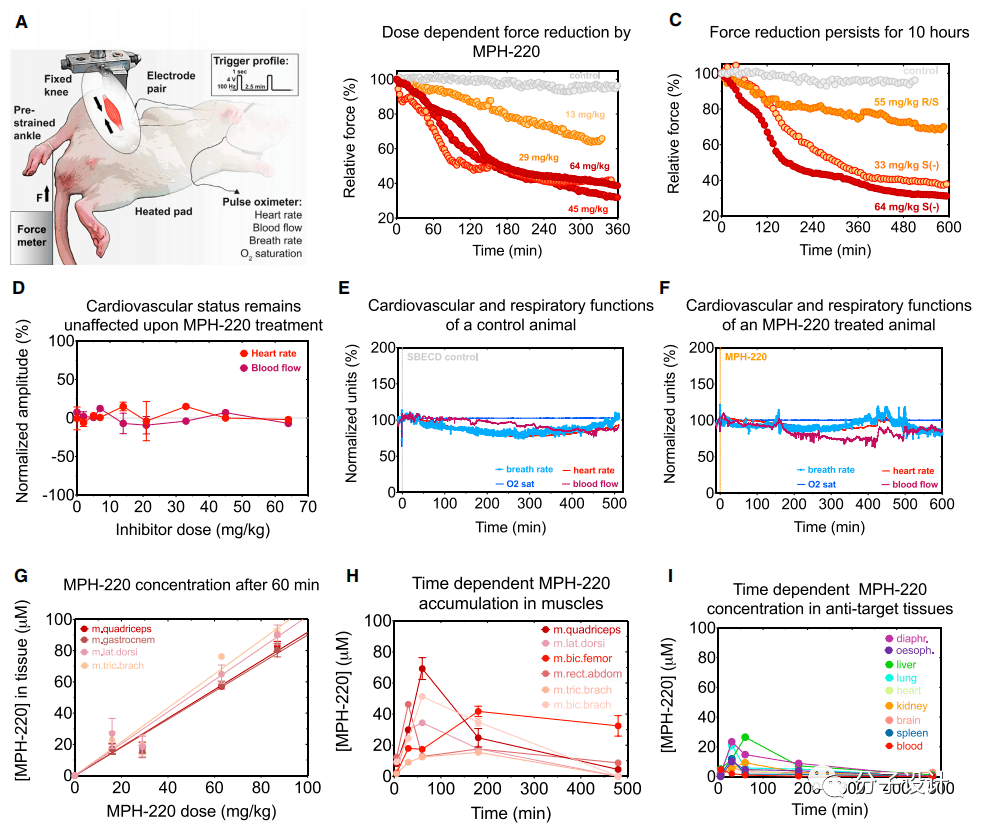 Next, the researchers conducted an in-depth study of the effects of oral and intraperitoneal injection of MPH-220 on muscle strength in living animals (Figure A). Through analysis, the researchers found that among all the corresponding isomers of MPH220, the S(-) configuration of MPH-220 has the best force relaxation effect (Figure C). In addition, the effect of MPH-220 in live animals is dose-dependent, and the effective time can last as long as 10 hours (Figure B, C).

When administered orally, the efficacy of MPH-220 is only slightly slower than that of intraperitoneal injection, which shows that MPH-220 has the advantages of good absorption and high permeability. These indicators all indicate that MPH-220 is a potential The drug has relatively good pharmacological properties.

By monitoring the rabbit’s heart rate, blood flow rate, and respiratory rate after medication, researchers found that under different doses, MPH220 had no significant effect on the cardiovascular system and respiratory system, and it was monitored for up to 10 hours. Except for the slight fluctuation of the heart rate caused by the anesthetized rabbit without eating for a long time, there are no abnormal indicators in the rest (Figure D, E, F).

These indicators once again confirmed the safety of MPH-220 in the body. In addition, the researchers also observed the accumulation of MPH-220 in different tissues of rats.

Experimental results show that the cumulative amount of MPH-220 in muscle is also dose-dependent. Over time, when MPH-220 is completely eliminated from the blood and other tissues, the accumulation in skeletal muscle persists after 3 hours, while its concentration in the target muscle is still within the effective concentration range (Figure G, H , I), which illustrates the high binding affinity and specificity of the inhibitor MPH-220 to fast myosin. 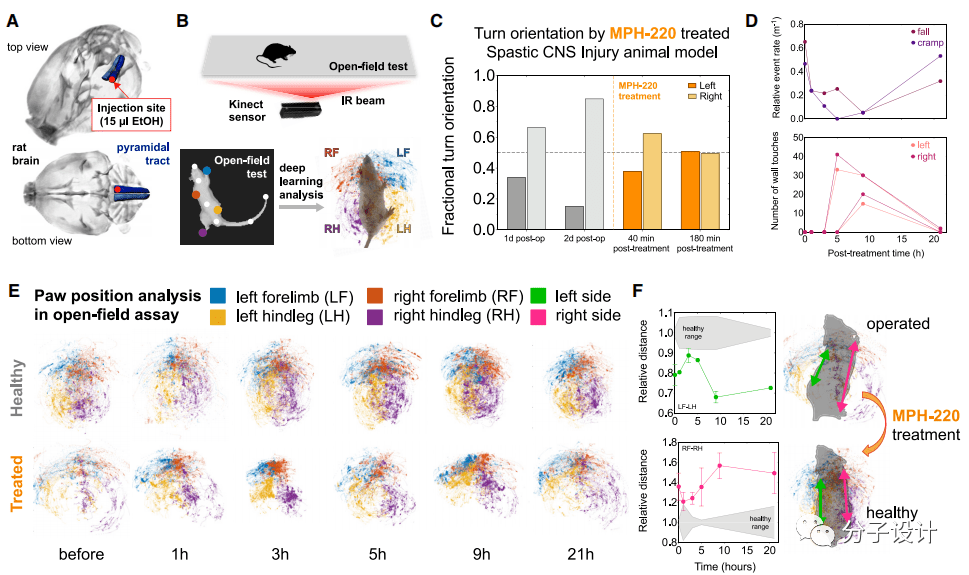 In order to explore the therapeutic effect of MPH-220 on gait disturbance after brain injury, the researchers used the recently developed animal model of spastic cerebral palsy for in-depth research (Figure A). They let rats with convulsions move for 15 minutes in a plastic box 80cm long and 80cm wide. Under the box is a piece of 8mm thick transparent plexiglass with a gait sensor installed underneath, which can record the gait of the mouse ( Figure B).

The researchers separately analyzed the effects of MPH-220 treatment on each animal. Rat A cannot use its right forelimb and left hind limb normally due to spasm, so it can only turn in a single direction along the right side. However, 40 minutes after MPH-220 administration, the gait of this rat’s hind limbs can be clearly seen With obvious improvement, the proportion of left turns is gradually increasing, and it can increase to 51% after 3 hours of treatment (Figure C).

The symptoms of rat C are that it cannot use both hind limbs, and the right hind limb will fall to the ground or twitch from time to time. After the researchers administered MPH-220 to rat C, they found that the frequency of falling and convulsions in this rat 3 hours and 5 hours after the administration decreased significantly, while the left and right feet landed on the ground.

The frequency also gradually increased (Figure D), thus proving the therapeutic effect of MPH-220 on this type of gait disorder. In the case of rat D, the right hind leg cannot be used, which makes it impossible for its limbs and paws to be properly positioned on the ground.

The researchers traced the gait of the mouse after MPH-220 administration and found that, compared with the healthy group, the mouse can begin to use both hind limbs normally after 5 hours of administration, and the gait gradually It has become normal (Figure E, F). These few examples show that MPH-220 does have obvious effects in improving gait disorders caused by brain injury.

Finally, the researchers focused on the changes in the spasm-related gait components caused by treatment through deep learning based on neural networks and principal component analysis. For the ground motion of all animals during 15 minutes of free movement in the open field test, the researchers used 28 parameters to characterize the three-dimensional position of the animal’s limbs and body axis under three motion speed states, and then based on the posture estimation deep learning algorithm.

Quantify motion characteristics and expose these characteristics in principal component analysis (PCA). PCA contains three main components PC1, PC2 and PC3, among which PC1 is significantly different from the healthy range, which indicates that the spastic walking asymmetry caused by pyramidal tract injury is reflected in the main gait components (Figure A). Most importantly, MPH-220 treatment significantly reduced the PC1 score, which confirmed that MPH-220 improved the gait pattern of the treated animals to make it consistent with the gait pattern of healthy rats (Figure A).

When the researchers analyzed the three speed states separately, they found that the vertebral tract injury mainly affects PC1 in the slow and medium speed states, and PC2 and PC3 in the fast state. After treatment with MPH-220, the scores of PC1 in the slow-moderate state and PC3 in the fast state have been significantly improved, gradually tending to the normal range (Figure B). Next, the researchers identified the main parameters that can have a significant impact on PC1 and PC3 in slow, medium and fast states.

The analysis shows that under low and medium speeds, MPH-220 has the greatest impact on the volume of the ellipsoid representing the position of the rat’s paw and the distance between their centers. On the other hand, in the fast state, MPH-220 has the most obvious effect on the ellipsoid angle, which indicates that the treated rats can keep their legs close to the body axis, similar to a healthy running mode (Figure C, D, E). These results further confirm that MPH-220 can treat the spastic component of abnormal movement after brain injury, and shows a promising potential to effectively solve the unmet medical needs in anti-spasm treatment.

In general, the data of this study show that the small molecule inhibitor MPH-220 can specifically act on the rapid skeletal muscle myosin 2 subtype, has good pharmacological properties, and does not affect the nervous system and heart The vascular system causes side effects and is expected to become a new generation of antispasmodic drugs with high safety and potential that can improve the quality of life of patients with muscle spasm and muscle stiffness.