For those who hate exercise, there is some worse news: Exercise may also keep you young. Not just looking younger, but actually younger from an epigenetic standpoint.

Until now, the benefits of exercise have been identified, including increased bone and muscle strength, improved mobility and endurance, and reduced risk of heart disease, diabetes , and high blood pressure .

The corresponding author of the paper is Dr. Kevin Murach, assistant professor in the Department of Health, Human Behavior and Recreation at the University of Arkansas.

While there is a wealth of data in this paper, reflecting the use of several analytical tools, the experiments to generate this data are relatively straightforward.

Laboratory mice at the end of their natural lifespan (22 months) were allowed access to a weight-bearing exercise wheel.

Generally, mice do not need to be forced to run and will run voluntarily.

Older mice run 6 to 8 kilometers a day, mostly in sprints, while young mice may run 10 to 12 kilometers. This weight-bearing exercise wheel guarantees their muscle building.

While not directly analogous to the way most humans exercise, Murach likens it to “a soldier running many miles with a heavy backpack.” 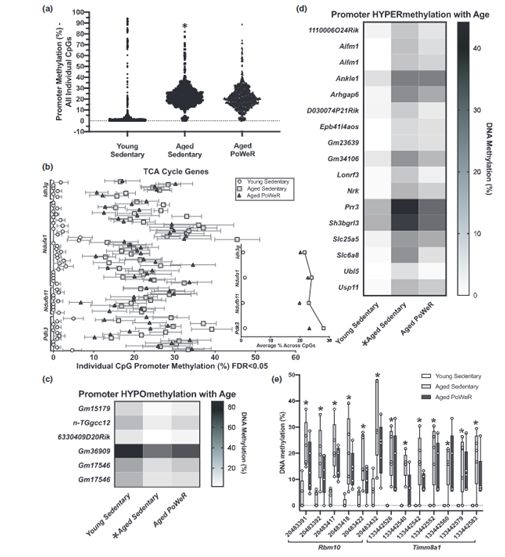 When studying the mice after two months of progressive weight-bearing exercise wheel running, the authors determined that they were 8 weeks younger in epigenetic age than quiescent mice of the same age at 24 months.

Murach notes that while the specific strain of mice and the conditions in which they live affect lifespan, “historically, their lifespan begins to decline at a significant rate after 24 months.” Needless to say, when lifespan is measured in months, the extra eight weeks — about 10 percent of the mouse’s normal lifespan — is a notable gain.

The science behind this, while complex, depends largely on a biological process called DNA methylation. Methylation refers to the attachment of methyl groups to the outside of a gene, making the gene more or less likely to activate and produce a specific protein.

As the body ages, DNA methylation at the promoters of genes in muscle tends to increase, even hypermethylation. “Changes in DNA methylation over a person’s lifetime tend to occur in such a systematic way that you can look at someone’s DNA from a specific tissue sample and see it with considerable accuracy,” Murach explained. Predict their chronological age.” Because of this, scientists can use one of several “methylation clocks” to determine the age of a DNA sample.

Murach wasn’t ready to say that exercise reversing methylation was responsible for improving muscle health. “That’s not what this study was about,” he explained. However, he intends to conduct research in the future to determine “whether changes in methylation lead to changes in muscle function.”

He continued, “If so, what are the consequences of this? Does the change at these specific methylation sites create an actual phenotype? Is it a cause of aging or is it just related to it? It’s just related to aging Did all the other things that happened in the process happen together? That’s what we don’t know.”