British researchers have discovered that mesenchymal stem cells (MSC) can replace grafts that require repeated implantation in the past and can be used for repair surgery. This kind of stem cell only needs to be implanted once, and it can be completely integrated into the heart tissue and grow with it. It can reduce the number of operations that newborns need to undergo because of certain congenital heart diseases [1].

In recent years, breakthroughs have been made in the research of mesenchymal stem cells in the field of heart disease, and people have gradually realized that stem cells are expected to revolutionize traditional heart surgery.

Cardiovascular disease: the number one killer of health hazards

At present, ischemic heart disease and congestive heart failure are still the main causes of high morbidity and mortality of cardiovascular diseases.

The loss of cardiomyocytes after myocardial infarction causes cardiac systolic dysfunction, and the dead cardiomyocytes are replaced by fibroblasts to form scar tissue. Stem cell-based therapy aims to regenerate damaged myocardium, which is an emerging mode of treatment [3].

According to data reported by the National Institutes of Health (clinicaltrial.gov), as of December 2020, 1,212 clinical trials based on mesenchymal stem cells have been completed or are still in progress. 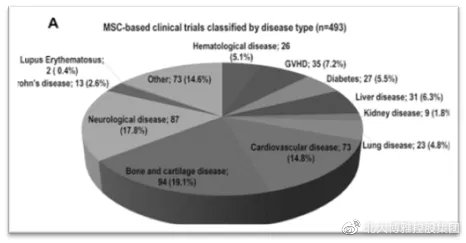 In clinical trials based on mesenchymal stem cells, research on the treatment of cardiovascular diseases accounted for a large proportion (14.8%) (Figure 1), and showed a very good prospect for treatment. A large amount of evidence from preclinical animal studies and clinical trials indicates that intracoronary injection of mesenchymal stem cells or mixed bone marrow stem cell populations may be a simple and effective method for the treatment of heart disease [6].

Remarks: The content of the form is compiled from Stem Cell Translational Medicine, and the specific project information can be inquired on the clinicaltrials.gov website using the serial number

An interesting clinical study was conducted on the treatment of acute myocardial infarction, which recruited 69 patients who underwent emergency angiography or angioplasty within 12 hours of the onset of myocardial infarction. After percutaneous coronary intervention, the patients were randomly divided into the intracoronary injection of bone marrow mesenchymal stem cells (34 cases) and normal saline group (35 cases). After 3 months, compared with the control group, the cell movement speed in the infarct area of ​​the MSC treatment group increased significantly, and the heart function was improved [7].

In 2011, researchers evaluated the safety and effectiveness of intracardiac injection of autologous mesenchymal stem cells cultured in vitro in patients with stable coronary artery disease and refractory angina. The results of this study are quite encouraging. Patients treated with mesenchymal stem cells have significantly enhanced left ventricular function and exercise capacity, as well as improved clinical symptoms and angina pectoris questionnaire assessment. Soon after, these therapeutic results were confirmed again [8].

Another laboratory conducted a phase II trial in which a total of 60 patients with chronic ischemic heart failure received intramyocardial injection of mesenchymal stem cells or a placebo at a 2:1 ratio. After 12 months, the injected mesenchymal stem cell infusion seemed to induce the regeneration of damaged myocardial tissue, thus confirming the safety of the treatment and the improvement of damaged heart function [9-10].

Foreign scholars have also conducted a noteworthy phase I/II clinical trial. They have performed intramyocardial injection of heterologous and autologous mesenchymal stem cells in patients with ischemic cardiomyopathy. The results found that both allogeneic and autologous cells are safe, and both cells show potential regenerative biological activity in patients with ischemic cardiomyopathy, which can reduce the infarct size and improve ventricular remodeling [10].

The advantages of mesenchymal stem cell clinical transformation are highlighted

So far, quite a few studies have proved the therapeutic effect of mesenchymal stem cell transplantation, but the exact underlying mechanism is still unclear. It is believed that these potential effects come from the paracrine effect of bioactive molecules released by mesenchymal stem cells, which in turn activates the resident cells in the heart to grow new blood vessels and cardiomyocytes.

In the future, there is still much work to be done from clinical transformation to large-scale promotion and use. Issues such as donor heterogeneity, in vitro expansion, immunogenicity and cryopreservation are all issues that need to be considered. The clinical application of mesenchymal stem cells should also be standardized and developed, so that diseases such as tissue damage or immune diseases applicable to mesenchymal stem cells can be better treated.

As the CCTV-2 “First Time” column, the reporter stated in the G20 special report: If there is a problem with the heart, the heart cell patch can be directly attached to the heart during the operation to complete the work of heart repair. This technology will be realized in the near future. Stem cell-based “heart regeneration therapy” and “heart patching” are increasingly entering the public’s field of vision. In the future, this type of technology is expected to become a new choice for cardiac surgery.