Lung cancer is one of the most common malignant tumors in the world. There are about 1.8 million new cases of lung cancer each year and 1.6 million deaths worldwide.

The results published in the Encyclopedia of DNA Elements (ENCODE) completed in 2012 show that about 80% of the sequences in the human genome will be transcribed into RNA, of which only about 2% of the mRNA encoding the protein, and the remaining sequences It is transcribed into a variety of regulatory RNA molecules. Among them, circular RNAs (circular RNAs, circRNAs) are single-stranded RNA molecules that do not have a 5’cap and a 3’poly(A) tail, and form a circular structure by covalent bonds.

In 1991, it was reported in the literature that circRNAs exist in humans and mice, but due to their low expression abundance and a small number of discoveries, they were once considered to be caused by incorrect splicing or splicing of pre-mRNAs As a by-product, it has not attracted people’s attention. In recent years, with high-throughput sequencing technology for sequencing samples without poly(A) RNA transcriptome and linear RNA digested with ribonuclease R (RNase R), it has been found that circRNAs are widely present in cells.

The special structure of the closed loop of circRNAs gives it high stability, making it a RNA molecule with a long half-life. Therefore, although the production efficiency of circRNAs is low at the transcription level, they can reach higher abundance through accumulation. In recent years, more and more studies have shown that circRNAs are widely involved in the occurrence and development of tumors. However, the role and mechanisms of circRNAs in the progression of non-small cell lung cancer are still poorly understood.

This is also the case that Qin Wenxin/Jiang Liyan team collaborated in 2019 to discover that circTP63 acts as a ceRNA to competitively bind miR-873-3p to up-regulate FOXM1 and promote lung squamous cell carcinoma proliferation (Nat. Commun. 2019). In 2020, it was discovered that circFOXM1 up-regulated FAM38D through competitively binding miR-614 Another discovery after promoting the progression of non-small cell lung cancer (J. Exp. Clin. Cancer Res. 2020).

In this study, the authors first used circular RNA expression profiling chips to analyze the differentially expressed circular RNA molecules in the cancer and paracancerous tissues of 3 patients with non-small cell lung cancer. The first 5 circRNAs molecules with the most significant differential expression in the results of microarray screening were verified in the para-cancerous tissues, and the circNDUFB2 with the most significant difference was finally screened as a candidate molecule for subsequent functional research and mechanism exploration.

As a competitive endogenous RNA (ceRNA), circRNAs competitively bind to miRNA, and regulate the stability of target gene mRNA has been extensively studied. The author’s analysis found that circNDUFB2 does not bind to the Ago2 protein, indicating that circNDUFB2 is not involved in regulating the progression of non-small cell lung cancer through the ceRNA mechanism. Subsequently, the author found through RNA pulldown experiment and mass spectrometry analysis that circNDUFB2 binds to the oncofetal protein IGF2BPs and reduces its protein stability. 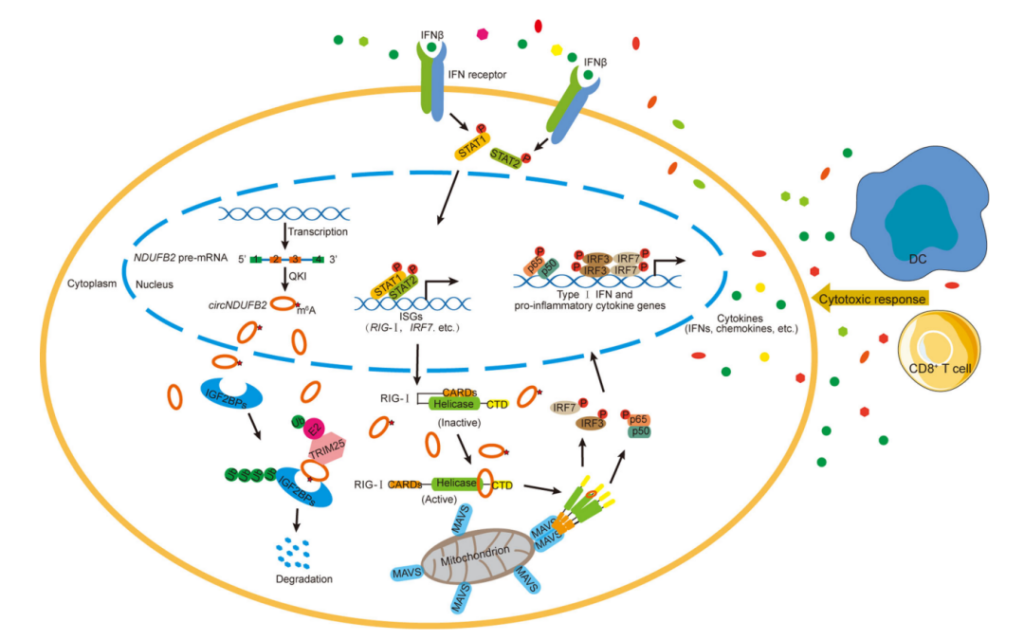 This study not only systematically screened the expression profile of circRNAs in non-small cell lung cancer tissues, but also explained in-depth the molecular mechanism of circNDUFB2 in promoting the ubiquitination and degradation of IGF2BPs and activating anti-tumor immunity. It is important for circRNAs to regulate the progression of non-small cell lung cancer. Functions and mechanisms provide new insights.