The reappearance of fearful memories makes negative emotions prolonged and unhealed, which further breeds despair and even causes severe depression and even suicide.

Fear memory is rooted in the brain and is one of the protective mechanisms for organisms to adapt to the complex living environment. However, excessive and unreasonable fear memories are extremely harmful to the body and are the primary factor leading to major emotional and mental disorders such as depression, anxiety, and post-traumatic stress disorder.

The existing fear memory fading strategy is to reduce the fear emotion from the cognitive level, and it is the main treatment method for the current related neuropsychiatric diseases. However, this method cannot completely eliminate the fear memory. Under certain conditions, the faded fear response will reappear. This phenomenon is called fear memory recurrence (referred to as fear recurrence).

The reappearance of fearful memories makes negative emotions prolonged and unhealed, which further breeds despair and even causes severe depression and even suicide. Therefore, the neurobiological mechanism of the reappearance of fear memory after it fades, especially the neural circuit and molecular mechanism of the fear memory fade-reappearance conversion, is a major “pain point” problem in the frontier of brain cognition and brain disease research.

The research results reveal the scene dependence of the fear memory fade-reappearance conversion and the synaptic integration rule of the sensory input combination, which provides new ideas for analyzing the principles of brain cognition, and at the same time for formulating neuropsychiatric diseases such as depression and anxiety The new intervention strategy provided a scientific basis.

In order to deeply analyze the neural circuit mechanism of fear recurrence, the researchers used reverse and forward neural circuit tracing techniques and found that LA neurons simultaneously receive signals from the auditory cortex (ACx) and ventral hippocampus (vHPC) at the single-cell level. Glutamatergic synaptic afferent. Combining optogenetics and electrophysiological recording technology in isolated brain slices, they further found that with the reappearance of fear memory, the synaptic efficiency of these two different upstream neural afferents showed an enhanced effect. On the other hand, at the overall behavioral level, specifically inactivating any one of the nerve afferents (ie ACx’LA or vHPC’LA) can block the recurrence of fear memory and eliminate another nerve afferent accompanied by fear recurrence. Adaptation of synapses now occurring.

Interestingly, when the researchers used optogenetics to activate the two neural afferents, ACx’LA and vHPC’LA, respectively to simulate the sound cues and scene information that the fear recurrence relies on, they observed the behavior of the fear memory recurrence in mice. He has successfully realized the artificial manipulation and “implantation” of fear memory reproduction. 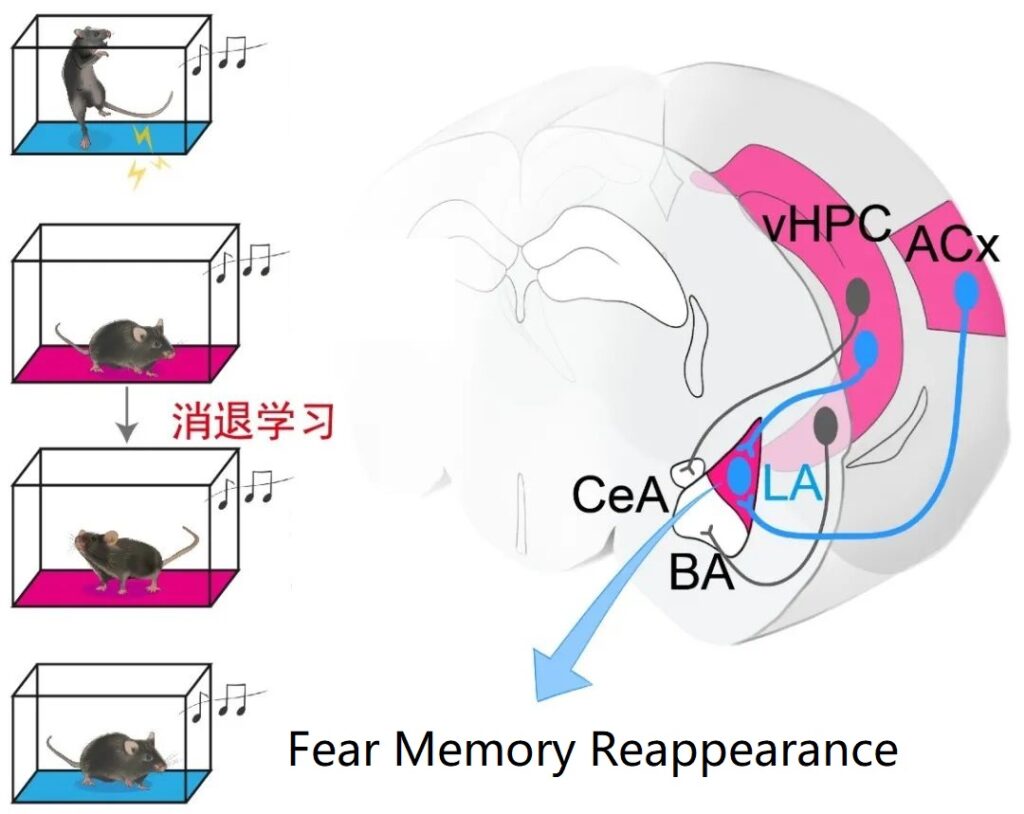 This research provides a new perspective for the systematic interpretation of the neurobiological mechanism of fear recurrence, and provides a theoretical basis for a deeper understanding of the basic characteristics of synaptic plasticity and its behavioral significance. At the same time, it also provides new clues for understanding the pathological mechanism of affective brain diseases, especially refractory (easy to relapse) depression and anxiety disorders.