Compared with the former two, CHC is relatively rare, accounting for about 0.4% to 14% of primary liver tumors. Because of its rarity and difficulty in preoperative diagnosis, research reports on this type of liver cancer are relatively scarce.

The study reported a 63-year-old male patient with a history of hepatitis B cirrhosis for 2 years. At the time of presentation, the AFP was 16.13ng/mL. The enhanced MRI of the liver showed that the liver segment VII showed a slightly longer oval T1 and long T2 signal, and the enhanced scan showed The ring continues to strengthen, and nodular enhancements can be seen in the ring. The lesions resemble a “ring”, and there is a clear boundary.

Based on the size and location of the patient’s mass, the research team performed a fluorescence-navigated laparoscopic segment VII liver resection. The cross-section of the gross specimen after surgery shows that the lesion contains two visible tissues with clear boundaries. It is guessed that the larger part is hepatocellular carcinoma (yellow arrow), and the smaller part is intrahepatic cholangiocarcinoma (blue arrow). Colored arrow), and the postoperative pathology also confirmed this clinical judgment. It is also seen that the two components under the microscope are very significant differences and clear junctions. 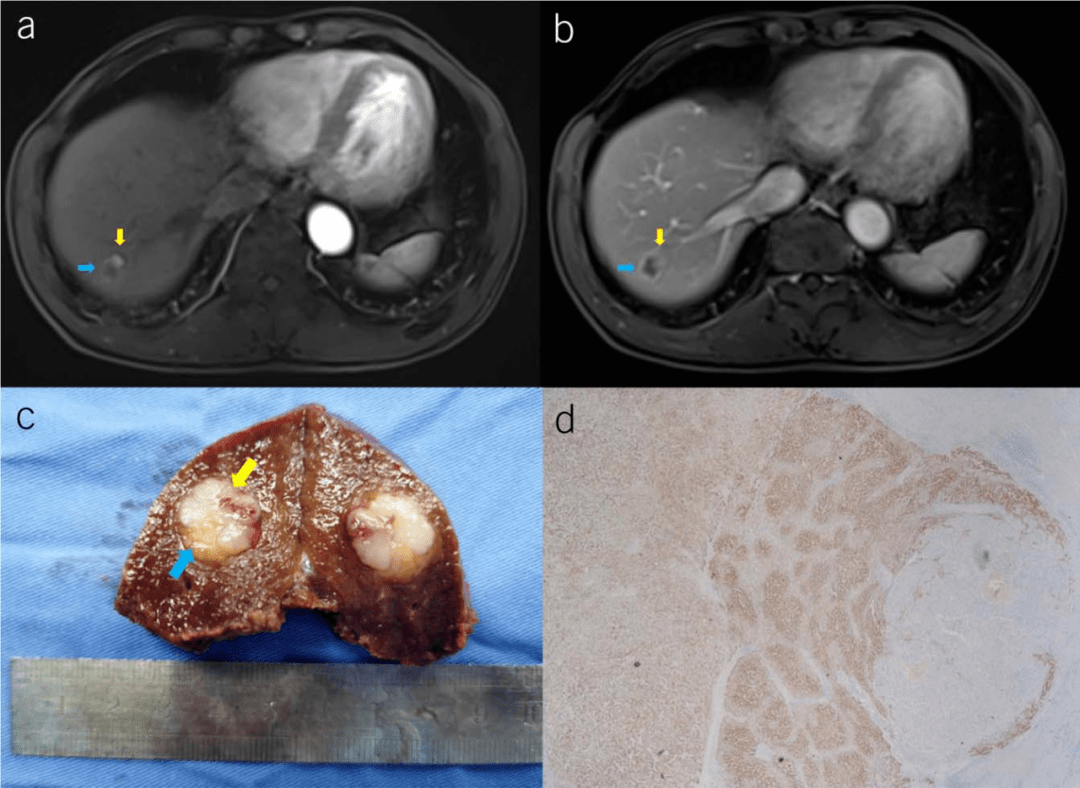 There are few reports on magnetic resonance imaging studies of CHC, especially in this case, CHC that can be clearly distinguished in preoperative imaging, intraoperative gross, and postoperative pathology is very rare. Due to the particularity of histology and pathology, CHC has the characteristics of strong invasiveness and poor prognosis, but its clinical manifestations are similar to those of HCC and ICC and its vague imaging features. Preoperative diagnosis is difficult but important.

The preoperative imaging features of double-lesion liver cancer presented in this case deserve the attention and reference of clinical imaging experts.

Hepatocellular-cholangiocyte mixed liver cancer is a rare but highly aggressive primary liver cancer, which is characterized by both hepatocellular carcinoma (HCC) and cholangiocarcinoma (CCA). The overall prognosis of the patient is poor, with a median overall survival of only 9 months reported in the literature.

Small sample studies have shown that platinum-based chemotherapy (such as gemcitabine/cisplatin) is superior to tyrosine kinase inhibitors (such as sorafenib), but there is a lack of evidence from randomized controlled clinical studies. Due to the lack of treatment plans for specific diseases, and there is no standardized treatment plan, the diagnosis and treatment of patients with mixed liver cancer relies to a greater extent on precise and individualized methods, which guide follow-up treatment based on precise classification at the multi-omics level. At the same time, interdisciplinary full-process collaboration also plays a key role in the diagnosis and treatment of such patients.