Why exosomes become the important “target” for cancer treatment?

Why exosomes become the important “target” for cancer treatment?  It is not surprising that exosomes have become an important “target” for cancer treatment. In fact, exosomes  also occupy a place on the stage of drug delivery. After being neglected for decades, exosomes are finally exuberant. In the past few years, they have earned enough eyeballs and have been strongly sought after by capital. Is there a hidden crisis behind this thriving scene?

Inhibition of exosomes can learn from the strategy of preventing mosquito bites: the first trick is to directly kill the mosquito, that is, to destroy the synthesis and secretion of exosomes; the second trick: the so-called defeat of its strength, and its strength. In other words, it is to leave a way for mosquitoes to survive, but make their bites harmless. If you can’t kill the exosomes in the cradle, inhibit its offensive ability; the third trick: apply Liushen toilet water to prevent mosquitoes from approaching. Imagine that the released exosomes have nowhere to go, that is, a tramp without any threat, not a fierce bullying [1]. 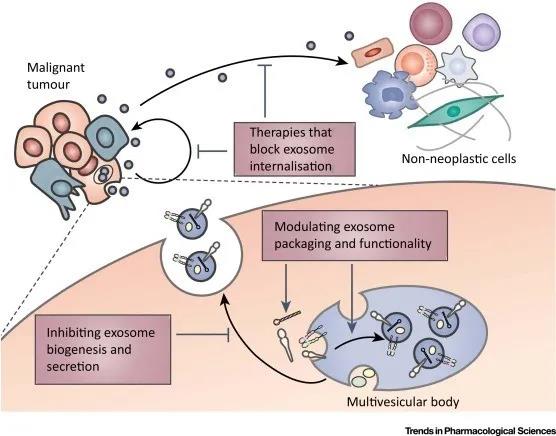 A. Destroy exosomal synthesis and secretion

The machinery that produces and secretes exosomes is operated by several “engineers”, including heparanase, vacuolar ATPase and the Rab family. Heparanase is highly expressed in aggressive tumors and can drive large-scale exosomal secretion [2]. The specific mechanism remains to be studied. But the relationship between vacuolar ATP and exosomal synthesis is more clear. It can effectively promote the fusion of multivesicular bodies and cell membranes, thereby gestating love crystalline exosomes [3]. Rab27a, a member of the Rab family, when it is silent (gene knockout), the secretion of exosomes is significantly reduced, and tumor metastasis is also hindered [4]. It is worth noting that Rab7b, the brother of Rab27a, has very different functions in regulating the secretion of exosomes. Just like the seven brothers, each has its own ability.

Fortunately, these engineers have opponents that can restrain them. The deadly rivals of heparanase, PG545 and M402, have successfully shown anti-tumor metastasis activity in animal models [5].

Of course, in addition to dealing with exosomes, heparanase has other functions related to cancer. Inhibitors of vacuolar ATP have also been shown to interfere with the release of exosomes and have the dual effect of improving drug resistance. [6]

Curcumin, as the name suggests, is related to ginger. It is a chemical component extracted from the rhizomes of Zingiberaceae plants. It is a good condiment that must be used at home. It is also a traditional herbal component in China and India for thousands of years. The famous pharmaceutical company Johnson & Johnson has also produced curcumin band-aids to promote wound healing.

So what does this yellow, spicy thing have to do with cancer? Because of its antioxidant and anti-inflammatory effects, a large number of studies have proved curcumin’s inhibitory effect on tumor development. Recent studies have shown that curcumin can also “turn civet cats for princes”, replacing the dangerous packages delivered by cancer cell exosomes to help cancer grow [7].

When exosomes enter the recipient cell, they bind to the heparan sulfate proteoglycan (HSPG) receptor on the surface of the recipient cell. Obviously, if drugs are used to occupy the binding site of the HSPG receptor, there is no way for exosomes to start. And heparin is a strong competitor that can compete with exosomes (HSPG).

Exosomes are the dark horse of liquid biopsy

The biggest feature of tumor liquid biopsy is that it does not move the knife and only sees blood, which means that there is no need to scrape tissue from the patient, only blood is taken. The four most popular liquid biopsy biomarkers are circulating tumor cells (CTC), circulating tumor DNA (ctDNA)/cell-free DNA (cfRNA), circulating RNA, and these tumor exosomes that make headlines every year. After obtaining the samples, high-throughput sequencing technology is used to decrypt various information, so as to detect the whereabouts and dynamics of the tumor to help diagnose and prescribe the right medicine.

In 2017, the liquid biopsy of the world’s top ten emerging technologies ranked first in the World Economic Forum [8]. It is not easy for exosomes to stand out from the four major liquid biopsy families.

What about DNA and RNA? Let alone the fact that there are differences in DNA/RNA in the blood of the same patient before and after exercise, it is also temporarily set up that future technology can effectively separate the DNA/RNA of tumors and normal cells (normal cell DNA/RNA accounts for about 95% of the total blood DNA/RNA. %), the information that can be obtained from these two brothers is only the tip of the iceberg. After all, from DNA/RNA to protein expression, function, and mutual restriction with the microenvironment, it is a complex multi-factor regulation process. 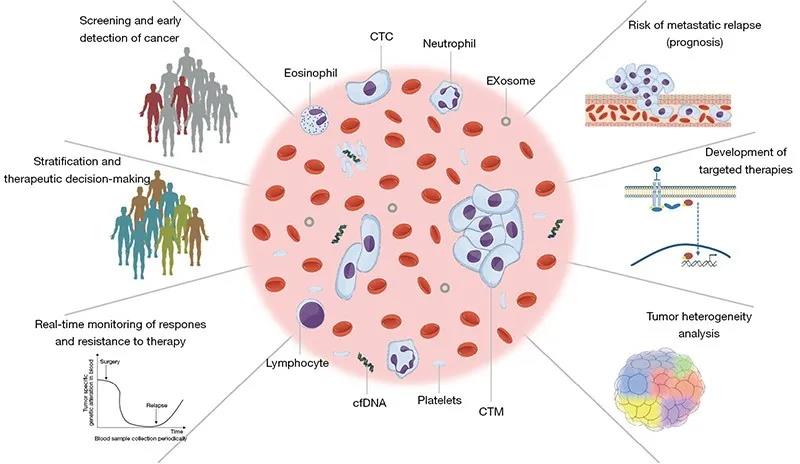 Are exosomes a well-deserved liquid biopsy artifact? Let’s sell it for now. Let’s talk about representative companies dedicated to the diagnosis of exosomal tumors.

The first to bear the brunt is Exosome Diagnostics, which was established in 2008, a master who is really rich in money and friends. In just ten years, Exosome Diagnostics has achieved a small goal of 100 million yuan, and has made friends, including pharmaceutical giants Takeda, Merck, Amgen, and global scientific research workers are familiar with supplier QIAGEN. In August 2017, he joined the circle of friends in the medical insurance industry and joined the insurer CareFirst as an ally to promote the commercialization of its leading product EvoDx.

During the COVID-19 pandemic in 2020, Exosome Diagnostics launched a “home-based” prostate test, which shows that it is ambitious to maintain its dominant position. No wonder Bio-Techne invested $250 million in olive branch for Exosome Diagnostics in 2018 and included it. Under his command.

This company, which made its fortune on exosomes, did not exclude peers, but took a cooperative attitude. A study on liquid biopsy detection of EGFR in patients with non-small cell lung cancer (NSCLC) was published at the end of 2017. The study showed that compared with the detection of ctDNA, simultaneous detection of cfDNA and exosomal RNA can increase the sensitivity by about 10% [10]. Unfortunately, the article did not show the sensitivity of exosomal RNA detection alone. 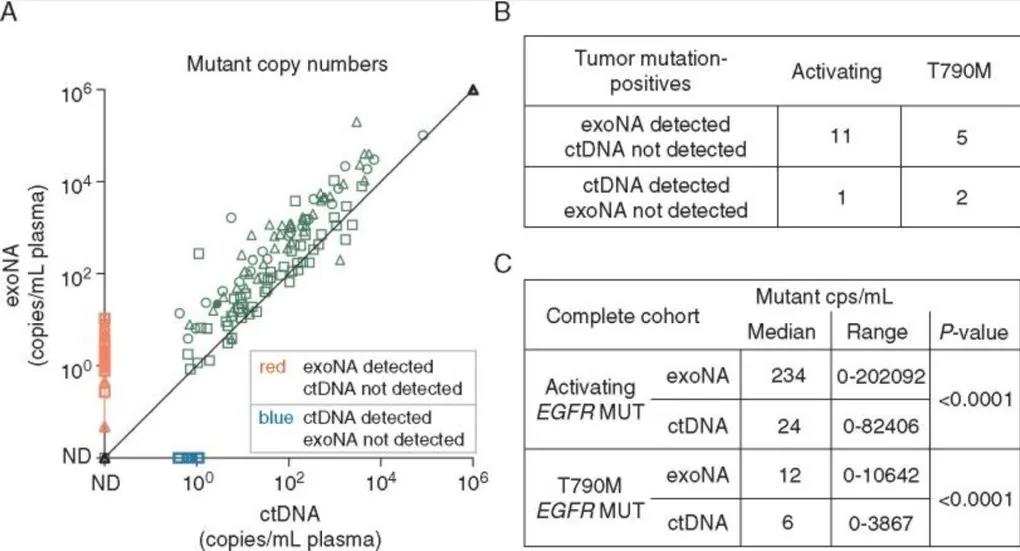 This shows that despite the advantages of exosomes, cooperation is the last word. Now let’s go back to the question mentioned earlier. Are there any shortcomings in exosomes? Obviously not.

Compared with circulating tumor cells, there is an absolute advantage in the number of exosomes, but its extraction purity and quantity are still not satisfactory. Furthermore, exosomes are derived from cytoplasm, so the DNA content is relatively small, which is why Exosome Diagnostics chooses to detect both cfDNA and exosomes. In addition, exosomes are derived from a series of tumor cells with diverse genes, and how to find information in multi-differentiation is also a big challenge.

In the case of a dominant family, it is conceivable that without a unique weapon, it is difficult to seize a place. In this situation, another company, Peregrine Pharmaceuticals (renamed Avid Bioservices in 2018) and Exosome Diagnostics use nucleic acids as an entry point, instead of measuring exosomes containing phosphatidylserine (PS) in plasma. To distinguish between healthy people and patients with ovarian tumors at different levels, with a brand-new concept to share a slice of the market for exosomal diagnosis.

How to turn exosomes into weapons to kill tumor cells

Above we talked about the strategy of targeting exosomes as a cancer treatment. If this is the case, it would be nothing new. Open a brain hole, cancer cells can release exosomes as weapons, but don’t forget that cancer cells can also absorb exosomes. This gives humans the opportunity to design exosomes to poison cancer cells, so there are these two well-known “Yellow Pharmacists”.

The first was Codiak BioSciences, which was established in 2015. It started with the diagnosis of exosomes, using the KRAS mutant gene in exosomes to diagnose pancreatic cancer. With the help of increasingly mature genetic engineering, Codiak founder Raghu Kalluri has made full use of the classical Chinese wisdom: to rule his body by his own way. Through in vitro modification, RNAi (RNA interference) that specifically targets the KRAS mutant gene is secretly inserted into the exosomes, and the KRAS mutant gene is knocked out directly.

When it comes to this, people who understand the market will have doubts. Although KRAS is a “non-drugable” target, small molecule drugs such as AMG510 and MRTX849 have good clinical data in recent years. Furthermore, RNAi can be delivered by other carriers, such as nanoparticles such as liposomes. The beauty is here, exosomes are purely natural and can prevent rejection by the immune system.

In fact, the well-known “don’t eat me” small molecule CD47 on exosomes has this label, and exosomes will not be swallowed by circulating monocytes [12, 13]. 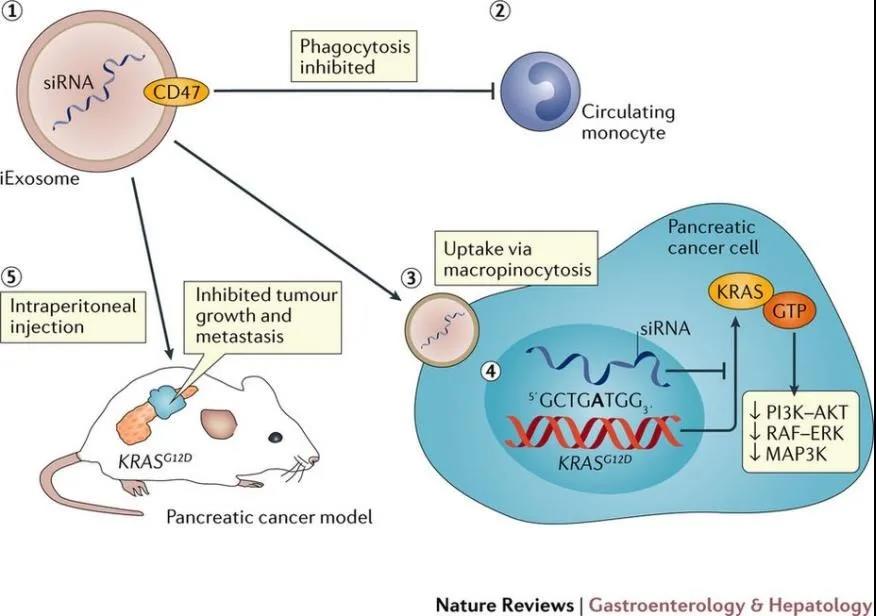 With the cutting-edge research on exosomes, Raghu Kalluri’s team published two consecutive papers in the top journal “Nature” [12, 14]. Although there was an uproar of “falsification” in the middle, it did not shake the confidence of investors. In a few years, without any clinical trials, 168 million US dollars have been bet. Codiak is also expected to become the first exosomes company to successfully go public (the original plan was to go public in 2019).

On the road of vigorous development, Codiak does not forget its original intention and keeps pace with the times. In June 2020, it was announced that it has reached a cooperation with Sarepta Therapeutics, a star enterprise in the field of precision gene therapy for rare diseases, to jointly design and develop gene therapies based on exosomal technology for the treatment of neuromuscular diseases, triggering a new wave of exosomes and The craze of gene therapy combining two swords.

Exovita Biosciences, another company that uses exosomes to treat cancer, was also established in 2015, and its treatment concept is even more peculiar. On a certain day and month of a certain year, Professor Kristina Trujillo of the University of New Mexico, out of curiosity, treated cancer cells with exosomes secreted from tissues 5 cm near the cancer tissue. I woke up the next day and found that the cancer cells were all dead. Trujillo is unbelievable, but the tissues taken from different patients have the same effect, and these exosomes have no side effects on normal cells.

Exovita Biosciences has been on fire since its establishment, and in the same year it received 1.7 million scientific research funds. But since then there hasn’t been any movement, which has to make people worry whether it will be another anticlimactic performance. After all, this story is too good to be true.

In addition to using exosomes to treat cancer, another idea is to use exosomes as a drug delivery tool. Evox Therapeutics, which is favored by Google Funds, is a relatively mature company in this field, mainly targeting neurological diseases. In June 2020, it signed a $1.2 billion cooperation agreement with Eli Lilly to develop RNA interference and antisense oligonucleotide drug delivery Exosomal carrier.

As a purely natural carrier, as mentioned above, exosomes can escape the pursuit of human immune cells. In addition, exosomes have the potential to solve an old problem of neurological drugs, which is to cross the blood-brain barrier[15, 16], and can survive under extreme conditions (such as acid, digestive enzymes, etc.), which provides the possibility of oral administration.

In the history of the fight against cancer, humans have made countless attempts, from small molecules, to large molecules of nucleic acids and proteins, to cell therapy, and exosomes are tiny structures between molecules and cells. A budding bead? 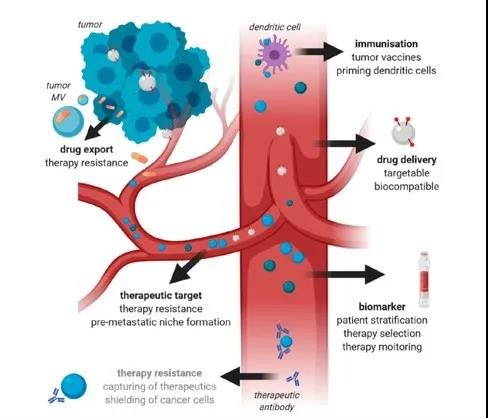 At this stage, there are still many technical issues that must be resolved. Among them, the industrialization of exosomal drug production (scale , Purity, cost, consistency and standardization) are the major challenges currently facing. Only by fundamentally deciphering the true role of exosomes in the development of tumors, the later clinical stage is not a loft in the air. A long way to go.