Metabolism is necessary for organisms to grow and reproduce, maintain their structure, and respond to the external environment. However, metabolites are rarely reported as epigenetic modification molecules.

Clinical studies have shown that the MG concentration in the blood of patients with type I diabetes and type II diabetes is 5.9 and 3.6 times that of normal people, respectively, and the MG content in the cells of diabetic patients is also significantly higher than that of normal cells. In addition, overexpression of the glyoxalase I (GLO1) gene in diabetic mice can reduce the symptoms of diabetes and its complications; conversely, the absence of GLO1 can exacerbate the symptoms of diabetes and its complications.

These results further indicate that MG and its detoxification pathways are closely related to the occurrence of diabetes and its complications. In plants, MG plays an important role in the process of growth and development and stress response. However, how MG regulates downstream signals remains unclear.

In this study, a monoclonal antibody that specifically recognizes MG-modified protein was prepared, and histone H3 was identified as MG-modified protein, and a monoclonal antibody that specifically recognized MG-modified H3K4 was further prepared. A series of experiments revealed that histone MG modification and The relationship between gene transcription proves that MG can be used as a new molecule of histone modification to participate in gene transcription, providing a new idea for exploring the response of animals and plants to adversity.

This study obtained mutants with elevated MG content and transgenic lines with reduced MG content, and used RNA-seq and RT-qPCR to prove that salt stress regulates the transcription of stress-responsive genes by increasing MG content.

In order to analyze how MG regulates gene transcription, the researchers prepared monoclonal antibodies (collectively called Anti-MMP) that specifically recognize MG-modified proteins lysine (Anti-MGK) and arginine (Anti-MGR). Analyzing the MG-modified protein, it was found that histone H3 can be modified by MG, and MG modification will cause the chromatin structure to become loose.

In order to rule out that MG may be regulated by other proteins other than H3 that modify the chromatin at the gene locus, the researchers have prepared a monoclonal antibody (Anti-H3K4MG) that specifically recognizes the MG modification of H3K4. ChIP-seq analysis using Anti-MMP and Anti-H3K4MG showed that histone MG modification is widely distributed throughout the chromosome, and through multiple recombination analysis with RNA-seq, it was revealed that the modification can affect gene transcription. 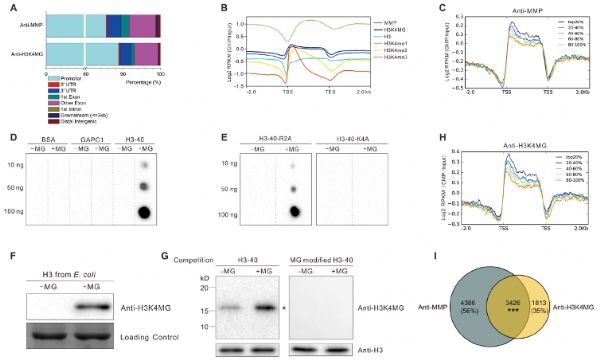 The researchers found that the downstream transcription factors MYC2 and ABI3 of salt stress mediate the modification of histone MG at the response gene, which also laid the foundation for the further identification of enzymes related to histone MG modification.