Macrophages play a decisive role in the production of abdominal adhesions

Macrophages play a decisive role in the production of abdominal adhesions.  Scars on the abdomen are called adhesions and are formed after inflammation or surgery.

They may cause chronic pain and digestive problems, lead to female infertility, and even have potentially life-threatening consequences such as intestinal obstruction. If adhesions occur, they must be operated on again.

They also increase the difficulty of subsequent surgical intervention. This has brought huge pain to patients and also a huge economic burden to the medical system. In the United States alone, abdominal adhesions cause US$2.3 billion in medical expenses each year. 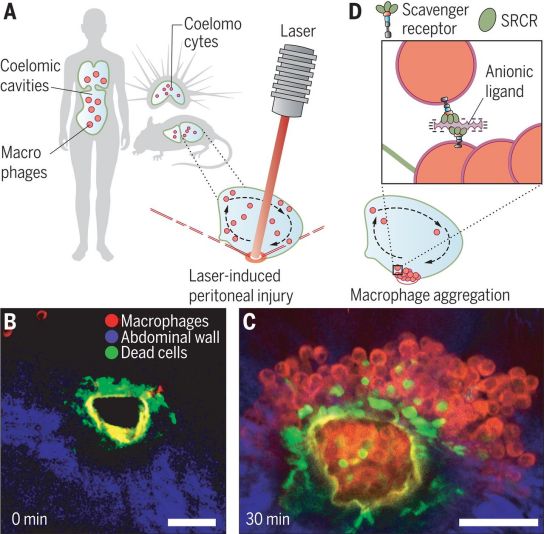 Subsequently, Zindel continued his research in the Paul Kubes group at the University of Calgary, Canada. Thanks to the clinical expertise of Zindel and the expertise of the Kubes research group, these authors have been able to develop a new imaging system that uses the most advanced microscope to see the inside of a living body. This allowed them to capture the macrophages in the abdominal cavity as they formed a shape that would subsequently lead to adhesions through the imaging scene. They also described the molecular mechanism behind this.

Macrophages are present in the so-called peritoneal fluid. Macrophages swim passively in this liquid, just like plankton in the sea. Their tasks include eliminating pathogens, but also to seal the damage in the abdominal cavity as soon as possible.

How they recognize the damage and move there is still unclear until now. Since the behavior of these cells in the test tube is very different from their behavior in the body, Zindel and Kubes have developed a new microscopy technique that allows them to use the thinnest part of the abdominal wall as a window to observe the “native habitat of these macrophages” “Land” — the peritoneal cavity, and take pictures of their movement.

When there is damage in the abdominal cavity, macrophages will gather within a few minutes to form a clot-like structure. In this way, they sealed the damage. As discovered in this research led by Zindel and Kubes, the molecular mechanism behind this is based on special, non-specific receptors that can recognize various structures. Simply moving in the peritoneal fluid through breathing or digestive exercises, the role of these receptors is to initiate coagulation around the injury. However, things that work well for minor injuries, such as surgery to open the abdominal wall, or insert implants, become a problem. Zindel explained, “In larger injuries, macrophages lose control-clots do not stop growing and form filaments. We were able to find that these filaments are the cause of adhesions.”

This may have evolutionary reasons: Macrophages have been evolutionarily optimized to cope with small damage well. Zindel said, “Let us give an example of a hunter injured by antlers. Macrophages will seal all internal wounds as soon as possible-this is the only way to survive.” However, during abdominal surgery, air enters the abdominal cavity or implants. Macrophages become overwhelmed when entering a foreign body, because evolution has not prepared them for this challenge. Zindel explained, “In this case, the macrophages become harmful and cause adhesions.”

These authors found that when the corresponding receptors in the mice were blocked, this led to a decrease in abdominal adhesions. Therefore, they have applied for a patent requiring the use of active ingredients to fight adhesions. These findings are relevant to many research areas, because no other immune cells are recruited as rapidly as macrophages in the abdominal cavity. Similar mechanisms may exist in other cavities, such as the heart or lungs, or may not only play a role in injury, but may also play a role in diseases such as abdominal tumors.

Candinas said, “This is an example of how laboratory research has high conversion value.” These authors will now look for partners in the industry and hope that they can also verify the efficacy of active ingredients in human tissues. For example, in the future, patients can be given a drug that inhibits the response of macrophages and inhibits the formation of adhesions before surgery.