2nd Part: Growth factors and receptor tyrosine kinases (RTKs).   In the first part, we talked about the classification, structure and function of RTKs, and took an important family, epidermal growth factor receptor (EGFR) family RTK as an example, to explain the binding mode of ligand and receptor (Learning the pathway first phase) . In 2nd part, we give an overview of RTKs from other families. 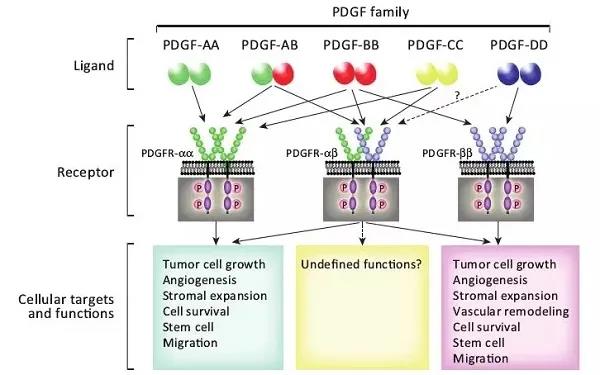 The figure above is a schematic diagram of the platelet-derived growth factor (PDGF) receptor family ligands and receptor activation modes. Currently, there are four main ligands identified to activate PDGFR: PDGFA, PDGFB, PDGFC and PDGFD. They form active homodimers (AA, BB, CC, DD) and heterodimers (AB) through disulfide bonds. When the dimer ligand binds to the receptor, it causes the dimerization (αα, ββ, αβ) of different subtypes of the receptor (PDGFR-α, PDGFR-β), and further transmits the signal to the cell, causing intracellular The effect is produced.

In addition, in addition to the aforementioned PDGF receptors (PDGFR-α, PDGFR-β), this family also includes receptors for SCF, Flt-3LG and M-CSF/IL-34 (see Table 1 in the previous issue). 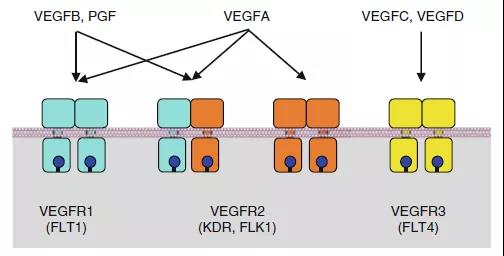 The main mode of action of VEGF and VEGFR is shown in the figure above. Among them, VEGFR-2 is mainly expressed in vascular endothelial cells and is the main receptor of VEGF. VEGFA/VEGFR-2 is the most important pathway for inducing angiogenesis. Because tumor cells grow and metabolize vigorously, they need to supply energy through new blood vessels, so targeting the VEGF/VEGFR pathway is an idea to inhibit tumor growth. 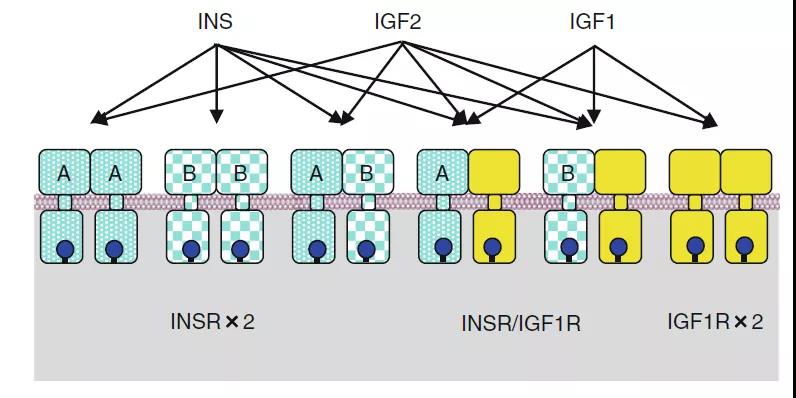 The diagram of the mode of action between the ligands INS, IGF1, IGF2 and different receptors is shown in the figure above. According to tissue specificity, insulin receptor (INSR) has two subtypes, A and B. IGF-2 and INS can bind to INSR-A receptors expressed in many epithelial tissues (induce homodimerization or interact with INSR-B). Heterodimerization) to promote cell growth; while INSR-B is a highly specific insulin receptor, which is mainly expressed in INS sensitive tissues. Only INS can induce the production of INSR-B homodimers and regulate Glucose homeostasis. In addition, IGF1 and IGF2 can induce the homodimerization of IGF1R, as well as the heterodimerization of INSR (A or B) and IGF1R.

At this point, some readers must ask: Is there IGF2R? In fact, there are, but after IGF2R is combined with IGF2, it cannot transcribe the signal, but causes pathway inhibition, so we won’t mention it here. Studies have shown that INSR-A and IGF1R are highly expressed in tumor cells; the PI3K pathway (introduced in the fourth phase) is the main pathway downstream of INS and IGF activating the corresponding receptors. On the contrary, IGF2R shows tumor suppressor function. 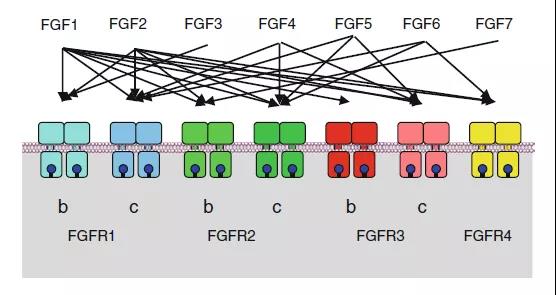 There are 18 kinds of cytokines in the fibroblast factor family, and the corresponding ones are 4 kinds of fibroblast receptors (FGR1, FGR2, FGR3, FGR4). The main function of FGF-FGFR is to amplify the signal cascade of FGF signal transduction to RAS-ERK and PI3K-AKT.

FGR1, FGR2 and FGR3 all have two subtypes b and c, which are expressed in mesenchymal (conjunctival) tissues or epithelial tissues. The simple action mode diagram is shown in the figure above, and only 7 types of FGF are shown in the figure.

The abnormal function of FGFR is found in a variety of tumors, among which gene amplification, gene mutation and chromosome rearrangement are the main reasons for the abnormal activation of FGFR. At present, there are few single inhibitors against FGFR, and most of them are multi-target inhibitors.

Hepatocyte growth factor (HGF) mainly plays a biological role through the specific receptor c-MET on the cell membrane. c-MET is a transmembrane receptor with autonomous phosphorylation activity encoded by the proto-oncogene c-MET. It is a heterodimer composed of 50 KD α subunit and 145 KD β subunit. HGF has two c-MET receptor binding domains, and its precursor is hydrolyzed by proteolytic enzymes to produce an active form. The mature HGF molecule consists of an alpha chain with a molecular weight of 96KD and a beta chain with a molecular weight of 34KD.

Studies have found that c-MET is abnormally expressed in a variety of tumors due to c-MET gene amplification, mutation, chromosome rearrangement, etc., and inappropriate activation of c-MET promotes cell proliferation, cell motility, invasiveness and angiogenesis. And it is associated with a more aggressive phenotype and a lower survival rate.

Mutations in RET are associated with type II multiple endocrine tumors. Mutations in the RET gene can be observed in medullary thyroid carcinoma (MTC), and the mutation forms are mainly point mutations. In general, RET gene mutations are relatively low frequency, and the main form of mutation is fusion with other genes.

ALK (anaplastic lymphoma kinase) and LTK (leukocyte receptor tyrosine kinase) were first discovered in lymphoma. In most normal cells, ALK is in an inactive state. When the ALK gene is mutated, it often leads to abnormal activation of the protein. ALK activating mutations mainly occur in neuroblastoma, and ALK activating mutations can also be detected in tumors such as thyroid cancer and lung cancer.

As no ligand for ALK has been identified, ALK has been an orphan receptor for a long time (researchers have identified Pleiotrophin (PTN) and Midkine (MK) that can bind to ALK, but there is a lot of controversy). In January 2015, the research team of Joseph Schlessinger, director of the Department of Pharmacology of Yale University School of Medicine, published a paper in Science that herparin (heparin) is the true receptor of ALK.

The ANG family is the only pro-angiogenic factor that contains both agonistic and inhibitory effects. It contains three members of ANG1, 2 and 4, and participates in the homodimerization of the tyrosine kinase receptor TIE-2 on endothelial cells. Angiogenesis; At the same time, ANG-2 can also inhibit angiogenesis by inducing heterodimerization of TIE-1 and TIE-2.

Erythropoietin produces hepatocyte receptor (Eph) and its ligand ephrins, as the largest subgroup of the tyrosine protein kinase receptor family, and plays a key role in cell adhesion, localization, migration and differentiation.

Ephrins can be divided into two types, A and B, corresponding to two types of EPH receptors, and their interaction mode has not yet been fully studied. EPH receptor-mediated intramolecular signal transmission is mainly mediated by intracellular tyrosine kinase ABL and guanylate exchange factor of Rho GTPase, which activate or inhibit cell proliferation/migration.

Tropomyosin receptor kinase (TRK), also known as Neurotrophin receptor kinase (NTRK), is a family of receptor tyrosine kinases, including NTRK1, The three receptors TrkA, TrkB and TrkC encoded by NTRK 2 and NTRK3 genes. In healthy tissues, pathways composed of ligands such as NTRK and nerve growth factor (NGF) participate in the development and function of the nervous system and cell survival, and play an important role in healthy tissues.

In some cases, the NTRK gene is fused with an unrelated gene, resulting in uncontrolled activation of the Trk signal, which can lead to cancer. In common cancers such as lung cancer, breast cancer, and colorectal cancer, only 1% to 5% of patients have NTRK gene fusion, while some rare cancers, such as infantile fibrosarcoma and secretory breast cancer, have NTRK fusion frequency. Up to 90%~100%. Drugs marketed for NTRK fusion mutations and drugs under research have significant clinical effects, so NTRK is also called a “diamond” gene.

The TAM receptor includes three members, namely: TYRO3, AXL and MERTK receptors. Corresponding to it are two ligands: GAS6 and PROS1. The gene of this receptor family was originally cloned from leukemia cells and is considered to be a proto-oncogene. Its expression level is related to the malignancy of solid tumors, especially glioblastoma, but no gene mutations or rearrangements have been found. .

Discoidindomain receptors-DDRs are receptor-type protein tyrosine kinases, including DDR1 and DDR2. The extracellular domain of this type of protein contains a structure similar to Dictyostelium discoideum lectin discoid domain 1. It is called the discoid domain (DR zone); secondly, there is a long near membrane zone (JM zone) between the DR zone and the transmembrane zone.

DDRs are widely expressed in human and mouse tissues, and can specifically bind to and be activated by a variety of collagens, and participate in a variety of disease processes, such as the occurrence and development of tumors, inflammatory reactions, and fibrosis.

The receptor tyrosine kinase-like orphan receptor (ROR) family includes two receptors, ROR1 and ROR2. Unlike the ROR family in nuclear receptors, ROR is a type of membrane receptor, because the ligand for the ROR protein was unknown when it was first discovered. , So it is defined as an orphan receptor. Studies have shown that ROR1 plays an important role in a variety of physiological processes, including regulating cell division, proliferation, migration, and cell chemotaxis by recognizing the non-canonical WNT signaling pathway mediated by WNT protein.

ROS receptor is a receptor tyrosine kinase encoded by the proto-oncogene c-ROS, and its ligand is unknown. ROS gene rearrangement is found in many malignant tumors such as glioblastoma and non-small cell lung cancer. It causes the continuous activation of kinases, up-regulates a variety of downstream signal pathways, and leads to continuous cell proliferation. In addition, the ROS gene also has fusion mutations with multiple genes.