It is called the “Philadelphia chromosome” and has become a classic example of individualized tumor treatment targets. The BCR/ABL fusion protein can be constitutively activated to drive the malignant proliferation of bone marrow stem cells, which has been proven to be the main pathogenesis of CML.

In 2001, the FDA approved the listing of ABL inhibitor imatinib, becoming the first small-molecule targeted drug and ushering in a new era of targeted tumor therapy.

The lead molecule of imatinib was obtained through high-throughput screening, and the initial target to be developed was PKCa.

After the optimization of the system structure, the drug molecule imatinib with excellent activity, pharmacokinetics (PK) and safety was finally obtained.

Although imatinib has been successful in some patients, it is relatively ineffective in advanced disease; in newly diagnosed cases, the rate of drug resistance is very low (usually 3-4% of patients), but it may be as high as 80% in the later stage .

The structure of the leader and imatinib

The resistance mechanism of CML mainly comes from the ABL mutation, and the T315I amino acid mutation is the most stubborn.

This gatekeeping residue reduces the activity of imatinib on ABL-T315I due to spatial conflict; another frequently reported mutant is L248V, which causes “Type II” inhibitors bind inactive proteins with unstable conformation. There are nearly one hundred ABL mutant forms that have been reported. 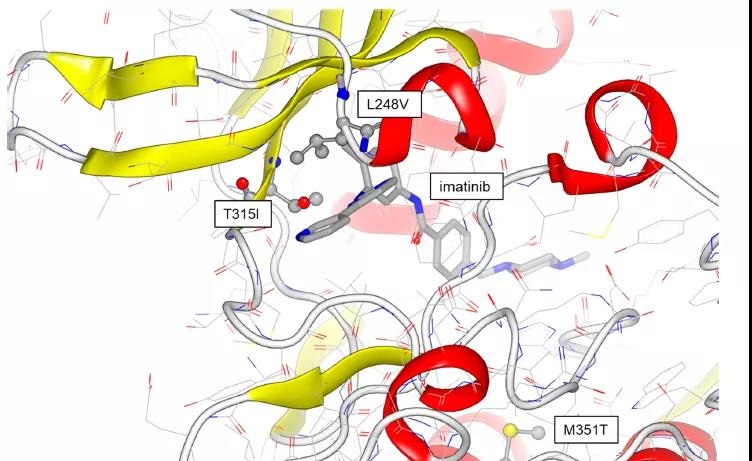 In response to mutation resistance, second-generation inhibitors try to solve this problem: 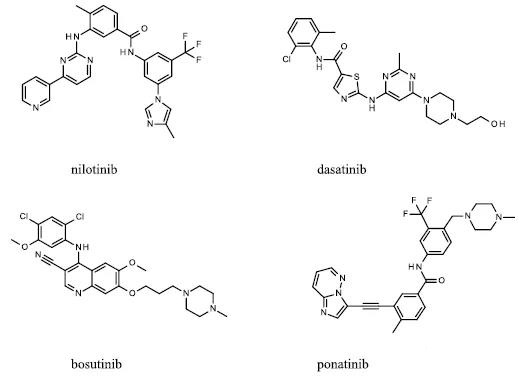 Nilotinib was developed through a structure-based design strategy. It has the same aminopyrimidine skeleton as imatinib, which improves the BCR/ABL activity and can overcome 33 reported imatinibs.

32 of the resistant mutations, but T315I is invalid. In 2010, Nilotinib was approved as the first-line treatment for CML. Although other mutations have been observed after Nilotinib treatment, some of these mutations can be overcome by increasing the dose.

Dasatinib was originally reported as an LCK/SRC inhibitor, but studies have shown that it is effective against 21 of 22 clinical BCR/ABL mutations, with T315I being an exception again. Unlike imatinib and nilotinib, dasatinib is a “type I” inhibitor that binds to the active form of kinase. Dasatinib was approved for the first-line treatment of CML in 2010.

The SRC inhibitor bosutinib (bosutinib) was found to be effective against imatinib-resistant mutants and is also a “type I” inhibitor; although it also has activities such as CSK and AXL, it is a choice for c-KIT and PDGFR Sex has improved. It is also ineffective against T315I resistance. Bosutinib was approved in 2012 for CML patients who were resistant (or intolerant) before BCR/ABL treatment.

Although not specifically designed for ABL targets, the multi-target inhibitor Ponatinib (Ponatinib) has been identified as a BCR/ABL inhibitor and is also effective against the T315I mutation.

Through molecular simulations, it was found that panatinib did not bind to residues in the gatekeeping site, nor did it conflict with the T315I site, thus retaining the T315I mutation activity. In the absence of other drugs, panatinib was approved in 2012 for use in patients with T315I-positive CML or T315I-positive.

However, due to the relatively poor kinase selectivity of panatinib, the long-term clinical application of panatinib is limited.

In 2006, Novartis and the Scripps Research Institute discovered the ABL allosteric inhibitor GNF-1, and reported for the first time a new non-targeting ATP pocket mechanism (nutmeg pocket). This series of molecules was originally obtained through cytotoxicity screening. The IC50 of the lead molecule to BCR/ABL expressing cells was 400 nM, while the negative control cell was 40 μM.

Structure-activity studies further improved the activity, and finally obtained the molecule asciminib (previously called ABL-001) that specifically inhibits the proliferation of BCR/ABL-positive cell lines such as K562 and SUP-B15, with an IC50 of 0.25 nM. Affinity probe studies show that the compound binds to imatinib in different pockets, and the actual binding site is confirmed by a competition experiment with ABL truncated N-myristoylated peptide. Later studies using nuclear magnetic resonance, mutagenesis and X-ray crystallography further supported the molecular binding mode of the myristic acid pocket. 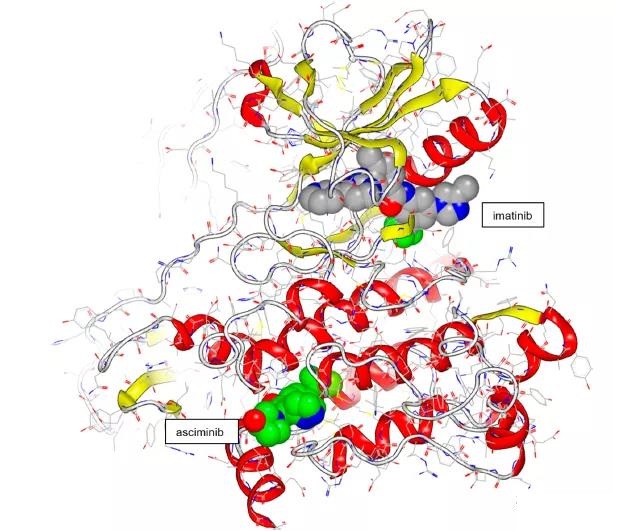 The position of the binding mode of imatinib (grey) and the allosteric inhibitor ascerin (green) in ABL, PDB: 5MO4.

Drugs target two different pockets of the same target respectively, which can achieve a “double whammy”. The combined use of ATP and allosteric inhibitors can overcome a larger number of resistance mutations than a single drug. Due to the functional difference of the binding pockets, there is a possibility that inhibitors of different mechanisms are synergistically active; this strategy may also delay the occurrence of resistance mutations.

Novartis reported that the combination of imatinib and asciminib reduced the production of resistant clones by 90% compared with imatinib alone. But there are also experiments that show that the resistance of allosteric inhibitors may be faster than imatinib. At present, the allosteric inhibitor asciminib has entered the clinical research stage as a single drug and joint research.

There is no doubt that the emergence of new strategies brings new treatment options for patients with ABL resistance. For example, PROTAC based on dasatinib can degrade ABL protein through IAP-mediated ubiquitination and proteasome; GMB-475 uses GNF backbone and VHL to also achieve ABL protein degradation. 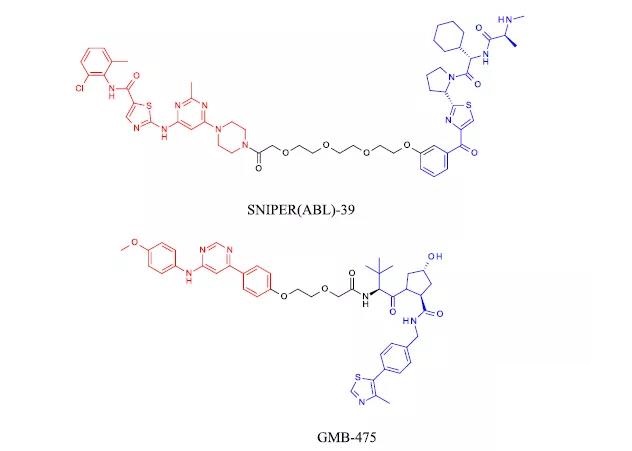 Structure of PROTACs based on dasatinib and GNF

The BCR/ABL binding region is red, and the E3 ligase element is blue

However, the problems in the field of ABL inhibitors have not been completely resolved, and CML patients still need new drugs to emerge.